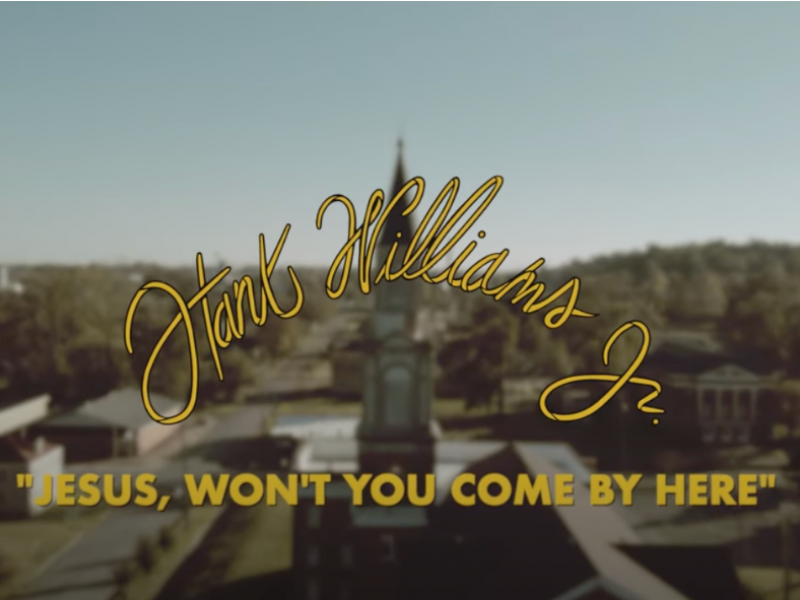 With Kenny Brown’s electric guitar, Auerbach on dobro and Bobbie Wood’s churchy piano and organ, the Country Music Hall of Famer sings with a robust conviction that suggests the larger than life amongst us transcend mortal limitations.

“My brother Dan, the band and I did our thing in the studio for a few days, and this video gives fans a look behind-the-scenes...in a room together, just playing the blues,” Williams shared with CMT.com. “The other clips were shot in a small town in Mississippi – just perfect for an old southern hymnal. It's a reminder to slow down and enjoy ourselves.”

“This song perfectly encapsulates what it was like to make this record,” adds producer Auerbach. “You can hear us hanging out before we slowly fumble our way into the song. It’s a very raw and real moment in the studio caught on tape.”

“Jesus, Won’t You Come by Here” follows the release of “Georgia Women,” as Tennessean shared that with the “cover of blues legend, R.L. Burnside’s 25-year-old classic, Bocephus achieves tapping into the spirit of his father's iconic teacher Rufus ‘Tee Tot’ Payne, and a century of other blues legends.”

More than the swaggering singles, roughneck fantasy videos or relentless sense of blue-collar boogie, at his core, the 72-year-old legend is a bluesman. With Rich White Honky Blues, Williams makes good on his legacy with a turpentine and rough wood take on the hill country blues that informed his father’s raw-boned style of putting his pain out there. GRAMMY-winning Producer of the Year Auerbach recorded the set live, with a dozen songs reprising classics from Robert Johnson, Lightnin’ Hopkins, Burnside, Muddy Waters, Big Joe Turner and a few from Bocephus himself.

About Hank Williams Jr.
Hank Williams Jr.’s extremely impressive resume has spawned 70 million albums sold worldwide, six PLATINUM albums, 20 GOLD albums, 13 No. 1 albums and 10 No. 1 singles. Marking 58 years since his first album in 1964, Williams Jr. is preparing to release his 57th studio album Rich White Honky Blues on June 17 via Easy Eye Sound, featuring 12 songs recorded over a three-day period by GRAMMY-winning producer Dan Auerbach. 2016’s It’s About Time (Nash Icon Records) included the history-making “Are You Ready for the Country,” as well as tunes “Dress Like an Icon,” “Just Call Me Hank,” “It’s About Time” and “The Party’s On” in addition to re-recorded versions of classics “Mental Revenge” and “Born to Boogie” with Brantley Gilbert, Justin Moore and Brad Paisley on guitar. Following It’s About Time, Williams Jr. has released several compilations, including All My Rowdy Friends Are Coming Over: Great Tailgating Songs, A Country Boy Can Survive (Box Set), Hank Jr. Sings Hank Sr. and 35 Biggest Hits. He continues to add accolades to an extremely impressive resume, which includes ACM Entertainer of the Year, CMA Entertainer of the Year and BMI Icon, in addition to a GRAMMY win and coveted inductions into the Nashville Songwriters Hall of Fame and Country Music Hall of Fame.