HALEY & MICHAELS SET TO PERFORM "HAIL MARY" FOR SECOND TIME IN ONE WEEK AT SUNDAY, OCT. 13 NFL GAME IN PHOENIX 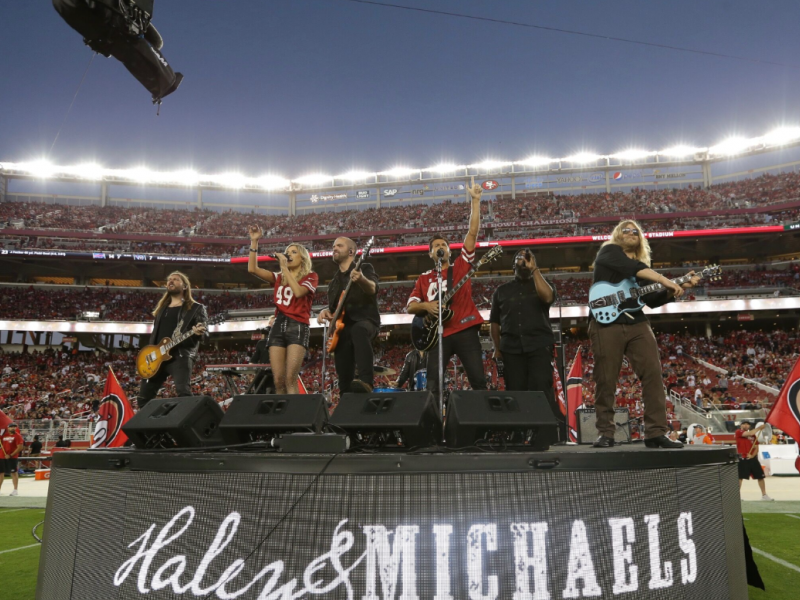 Duo to Sing During Halftime of Cardinals vs. Falcons game; Performance Follows This Week's Monday Night Football From Levi's Stadium

From field to stage, Music City and the National Football League (NFL) have a storied history. Whether it is Faith Hill or Hank Williams Jr. welcoming viewers via song to Sunday and Monday Night Football respectively, memorable U.S. National Anthem performances from Garth Brooks and Carrie Underwood or songs like Kenny Chesney’s “The Boys of Fall,” country music fans and artists alike are “ready for some football.” Husband and wife duo, Haley & Michaels, are no exception. They are carrying on that long-standing tradition and doing it on their own.

For the second time in one week the two will take the NFL halftime stage, this time to perform at the Cardinals vs. Falcons game at the University of Phoenix Stadium. This follows their halftime performance at the San Francisco 49ers vs. Cleveland Browns game for Monday Night Football this week.

In addition to halftime performances, “Hail Mary,” the title track from their debut album, is receiving stadium airplay during recent New York Giants, Baltimore Ravens and Houston Texans games, which will further build the duo’s fan base around the league.

Shannon Haley and Ryan Michaels grew up just three miles apart in California’s Bay Area, yet they did not meet until both had relocated to Nashville in 2014 as up-and-coming singer/songwriters. The duo, who married in 2015 and were named an “Artist to Watch” by The Huffington Post, co-wrote all 12 tracks on Hail Mary, which was released Oct. 4 on Sony/ATV’s label imprint Hickory Records/RED Music.

“To watch these songs take on a whole new context in a movie such as Netflix’s Walk. Ride. Rodeo. and beyond with the NFL tapping the single for ‘Monday Night Football’ is really wilder than any dreams we could have had as a duo or as singer/songwriters,” shared Shannon Haley and Ryan Michaels.

Earlier this year the duo learned the album’s title track and lead single, “Hail Mary,” had been chosen by the 49ers for their 2019-2020 season. Furthermore, they filmed the music video for the song, directed by the team’s VP/executive producer, Rob Alberino, and produced by the 49ers, in the stadium of their hometown team.

As Haley notes, “It’s where we each learned the meaning of teamwork, and it’s not just an energizing source for us as football fans…performing here as artists and working with the team is actually living out our dreams!”

“We’re releasing a body of work we’ve spent our whole career creating,” adds Michaels. “We’ve performed everywhere from The Today Show and the Grand Ole Opry to Waffle House and now the Levi’s and University of Phoenix stadiums.”

More than 50 radio stations have played “Hail Mary” and the song has hit some of Spotify’s most premier playlists, with over 1.5 million streams to-date. Haley & Michaels are featured this month as one of Ty Bentli’s “Undeniable Artists of 2019” and will perform on the Rhythm & Boots show Oct. 22 at 3rd & Lindsley in Nashville.

About Haley & Michaels
Shannon Haley and Ryan Michaels grew up in Northern California just three miles apart but didn't meet until they were both living in Nashville. They had immediate chemistry and have been writing and recording together ever since; they were married in May 2015. The duo has been featured on numerous Spotify playlists, amassing over 30 million online streams, has appeared twice on NBC’s Today and has also experienced great success on SiriusXM's "The Highway." They have sold more than 200,000 digital downloads independently. Haley & Michaels signed with Sony/ATV as songwriters and additionally with Sony/ATV’s label imprint Hickory Records/RED and released their first studio album Oct. 4. For more information on Haley & Michaels, visit www.haleyandmichaels.com or follow them @haleynmichaels on Twitter, Facebook.com/HaleyandMichaels  and @haleyandmichaels on Instagram.