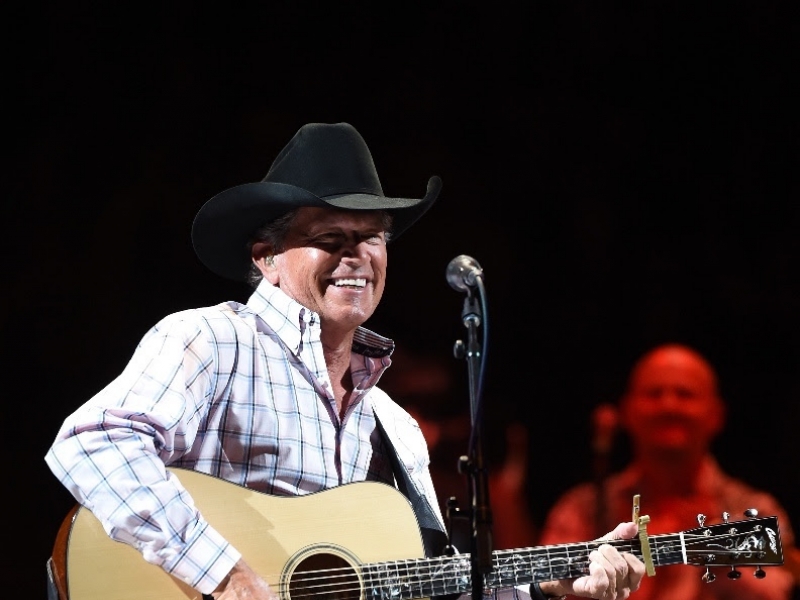 LAS VEGAS, Nev. (April 23, 2016) – On a balmy Friday night in Las Vegas, the heat only added to the excitement as George Strait packed the new T-Mobile Arena and captivated a record-setting 19,222 fans during the opening night of his Strait to Vegas exclusive concert series. With his Resistol cowboy hat on his head, his signature Wrangler shirt and denim with a well-worn acoustic guitar and the expert Ace in the Hole Band backing him up, Strait proved once again that he is the undeniable “King of Country Music” and consummate entertainer. As he churned through hit after hit, he lived up to the Las Vegas Review Journal's bolstering observation, “George Strait is someone you can legitimately say is in a league of his own.”

“I’ve missed you guys and I’m looking forward to being here a few more nights this year,” Strait told the crowd early on in the night before performing for over two hours. In addition to playing a selection of his illustrious 60 career No. 1’s including “Give It All We’ve Got Tonight,” “Ocean Front Property,” “All My Ex’s Live in Texas” and more, Strait also took a moment to pay tribute to Merle Haggard who was not only an icon for Strait but also a friend. “We’ll never get to hear Merle play live again, but his music will live on forever,” Strait said before performing a medley consisting of “Mama Tried,” “Fightin’ Side of Me,” and “My Life’s Been Grand,” with Strait pausing at the end in remembrance.

Strait first announced his plans to perform a series of select shows at T-Mobile Arena last September, immediately selling out every date in theStrait to Vegas concert series for 2016 and 2017. Musgraves will join Strait as support for all 2016 dates.

Upcoming Strait to Vegas dates are as follows, with more likely to be added in 2017:

About George Strait
George Strait is the undeniable “King of Country Music.” His music career spans more than 30 years; includes 60 No. 1 singles, more than any other artist in any genre; and boasts 33 platinum or multi-platinum-selling albums, more than any country artist and third across all genres behind only The Beatles and Elvis Presley. Strait is the only act in history to have a Top 10 hit every year for over three decades and has sold nearly 70 million albums and earned more than 60 major entertainment industry awards.

Strait, whose name has become synonymous with “real country” since his 1981 debut, was inducted into the Country Music Hall of Fame in 2006. He has since released five more albums, including the GRAMMY Award-winning Troubadour and his latest chart-topping release, Cold Beer Conversation. In 2014, he shattered the North American indoor concert attendance record by drawing 104,793 concertgoers to his The Cowboy Rides Away Tour finale at AT&T Stadium in Dallas. Strait will perform six sold-out shows at the Las Vegas Arena in 2016 as part of his “Strait to Vegas” exclusive concert series, which has been extended into 2017 due to overwhelming demand.