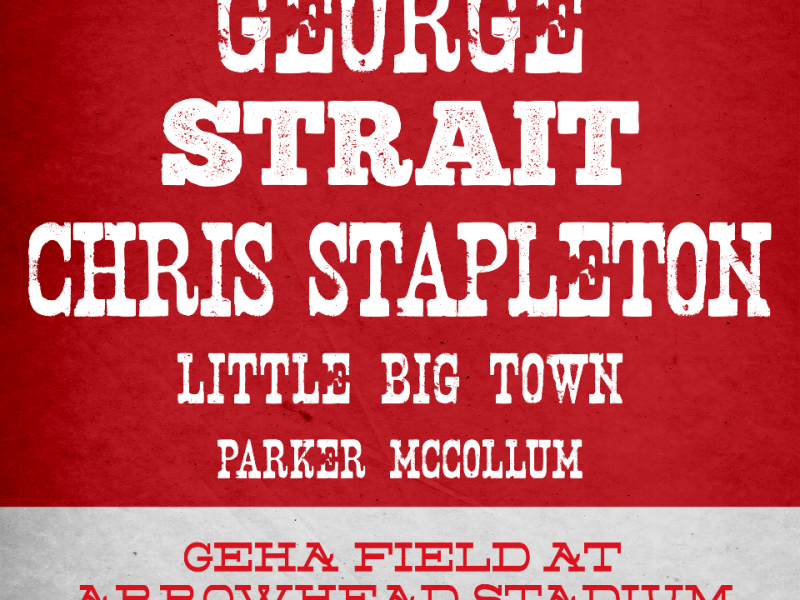 KANSAS CITY, Mo. – The King of Country’s one-night-only concert event planned for July 30 at Kansas City’s GEHA Field at Arrowhead Stadium keeps getting bigger as Messina Touring announces the addition of ACM New Male Vocalist and fellow Texan Parker McCollum. The chart-topping artist joins superstars Chris Stapleton and Little Big Town in gracing the stadium’s stage for the first time, while George Strait himself makes his first return to the venue since 2001. Tickets are on sale now via Ticketmaster.com with limited quantities remaining.

McCollum’s major label debut Hollywood Gold was met with widespread critical acclaim and became the top-selling debut country EP of 2020. The singer/songwriter and multi-instrumentalist earned his first-ever No. 1 hit with his Platinum-selling debut single, "Pretty Heart," and his follow up single, "To Be Loved By You," off debut album Gold Chain Cowboy, also took the No.1 spot for two consecutive chart-topping singles. McCollum has been named an 'Artist to Watch' by Rolling Stone, Billboard, SiriusXM, CMT, RIAA and more with American Songwriter noting, "The Texas native teeters on the edge of next-level superstardom." A dedicated road warrior, McCollum already sells out venues across the country including record-breaking crowds in Austin and Lubbock, plus Nashville's Ryman Auditorium and three nights at the iconic Billy Bob's Texas. He also made his Grand Ole Opry debut last year and recently made his RODEOHOUSTON debut performing for a sold-out crowd and turning his childhood dream into a reality.

The July 30 show will mark the 54th concert or music festival in GEHA Field at Arrowhead Stadium history and will be the 15th concert performance that the stadium has hosted since 2011. The 2022 show will be Strait’s fourth performance (1998-99, 2001) at GEHA Field at Arrowhead Stadium. In addition to performing in Kansas City, Strait will also headline Lincoln, Nebraska’s Pinnacle Bank Arena tomorrow, April 23, and will perform back-to-back nights with Willie Nelson and Randy Rogers for the grand opening of the Moody Center in Austin on April 29 and 30.

For more information and to purchase tickets to all upcoming dates, visit GeorgeStrait.com.