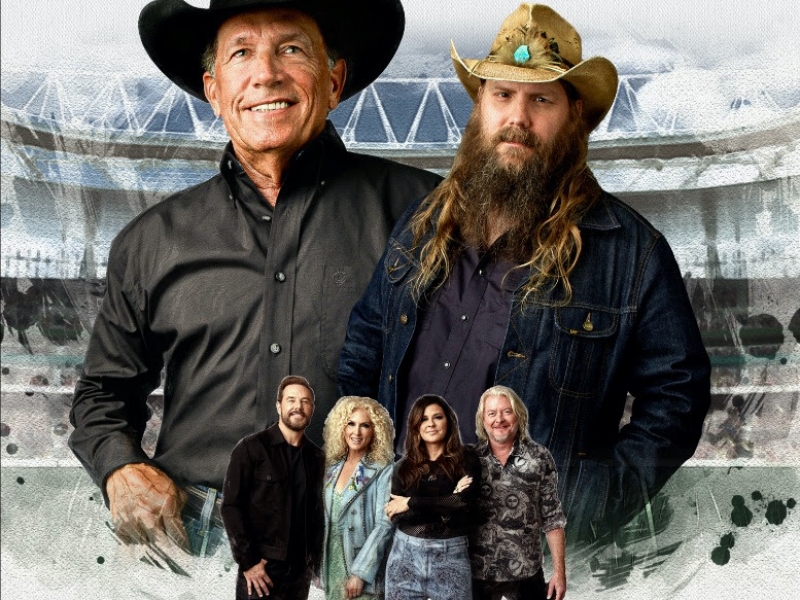 GEORGE STRAIT AND CHRIS STAPLETON TEAM UP
TO PLAY ONLY SIX MARKETS, SUMMER 2023

NASHVILLE, Tenn. – Fans of George Strait will have six major opportunities to see the King of Country live in 2023, alongside one of the country’s most respected and beloved musicians, Chris Stapleton, for one-off stadium dates in Phoenix, Seattle, Denver, Milwaukee, Nashville and Tampa. Joining 89x Platinum music icon Strait and eight-time GRAMMY-winner Stapleton for all dates are special guests, Little Big Town.

“When I walk through those curtains and see those smiling faces, my feet don’t touch the ground again ‘til I walk back out and get on that bus that got me there. That’s from a song I wrote called ‘I’ll Always Remember You.’ It’s a true statement,” Strait shared exclusively with Billboard of the announcement. “When we talked about doing these six shows next year with Chris, it was a no brainer for me. I was all in.”

About George Strait
With an unmatched 60 singles hitting the top of the charts—more than any other artist in any genre—during the span of his 30+ year career, Strait has collected 33 Platinum or multi-Platinum-selling albums, more than any other Country artist and ranking third across all genres behind The Beatles and Elvis Presley. The Texas troubadour is the only artist or act in history to have a Top 10 hit every year for over three decades and recently earned his 100th entry on the Billboard Country Airplay chart with his latest single, “The Weight of the Badge.” He has sold nearly 70 million albums and earned more than 60 major entertainment industry awards, including induction in the Country Music Hall of Fame in 2006.

Since his record-breaking Cowboy Rides Away Tour wrapped in 2014, Strait has performed for limited engagements, including appearances in 2021 headlining both weekends of the Austin City Limits Music Festival as well as Atlanta’s Mercedes-Benz Stadium and Minneapolis’ U.S. Bank Stadium. He also extended his Strait to Vegas series at T-Mobile Arena earlier this year along with headlining shows at Little Rock’s Simmons Bank Arena and Kansas City’s GEHA Field at Arrowhead Stadium in addition to returning to the Houston Livestock Show and Rodeo for his 31st performance at the event and headlining back-to-back nights in Austin for the Moody Center’s grand opening celebration.

As previously announced, Strait will also perform in his home state of Texas this fall for a two-night stand at Fort Worth’s Dickies Arena on Friday, November 18 and Saturday, November 19, 2022. The two shows sold out within just hours of going on sale to the public this spring. In addition, he will return to Las Vegas for his Strait to Vegas series once again, gracing the stage at his T-Mobile Arena home away from home for the 35th and 36th times on Friday, December 2 and Saturday, December 3.

About Chris Stapleton
Kentucky-born Chris Stapleton is an eight-time GRAMMY, 14-time CMA and 10-time ACM Award-winner and one of the country’s most respected and beloved musicians. His most recent album, 2020’s acclaimed Starting Over, recently won three awards at the 67th Annual GRAMMYs: Best Country Album, Best Country Solo Performance (“You Should Probably Leave”) and Best Country Song (“Cold”) in addition to earning Album of the Year honors at both the 54th Annual CMA Awards and 56th ACM Awards. The new album follows Stapleton’s pair of Platinum-certified releases from 2017, From A Room: Volume 1 and From A Room: Volume 2, as well as his 6x Platinum breakthrough solo debut album, Traveller, which includes the Diamond-certified “Tennessee Whiskey.” Stapleton will wrap up his extensive 2022 “All-American Road Show” tour next weekend with shows at Fort Worth’s Dickies Arena and Houston’s Cynthia Woods Pavilion before ending his year with a special show at Atlanta’s Mercedes-Benz Stadium with Miranda Lambert, Dwight Yoakam and Katie Pruitt on November 12. In addition to his work as a musician, Stapleton and his wife, Morgane, are founders of the Outlaw State of Kind charitable fund, which supports a variety of causes that are close to their heart.

About Little Big Town
GRAMMY, ACM, CMA, AMA and Emmy Award-winning group, Little Big Town – consisting of members Karen Fairchild, Phillip Sweet, Kimberly Schlapman and Jimi Westbrook – first entered the music scene over 20 years ago with hit songs “Boondocks,” “Bring It On Home,” “Good As Gone” and the GRAMMY-nominated “Little White Church.” The band’s breakthrough albums Tornado and Pain Killer produced multiple No. 1 singles, including “Pontoon,” “Tornado” and “Day Drinking,” as well as the history-making, best-selling country single of the year (2015) “Girl Crush.” 2017’s The Breaker debuted at No. 1 on the Billboard Country charts and Top 10 (No. 4) on the Billboard 200 to critical acclaim. The album features their GRAMMY-winning, multi-week No. 1 single, “Better Man,” as well as the 2019 GRAMMY-nominated, “When Someone Stops Loving You.” The band’s self-produced ninth studio album Nightfall was released January 2020 and hit the top of the Billboard Country charts. The record included critically-acclaimed and GRAMMY-nominated “The Daughters,” “Over Drinking” and “Wine, Beer, Whiskey” – the latter of which has reached more than 380 million global streams. In April 2022, they released their new single “Hell Yeah,” which has amassed more than 60 million global streams to date. Little Big Town has earned more than 45 award show nominations and has taken home nearly 20 awards, including multiple GRAMMY, AMA, People’s Choice, CMA and ACM Awards, in addition to an Emmy award. Their highly anticipated 10th studio album Mr. Sun was released on September 16, 2022.