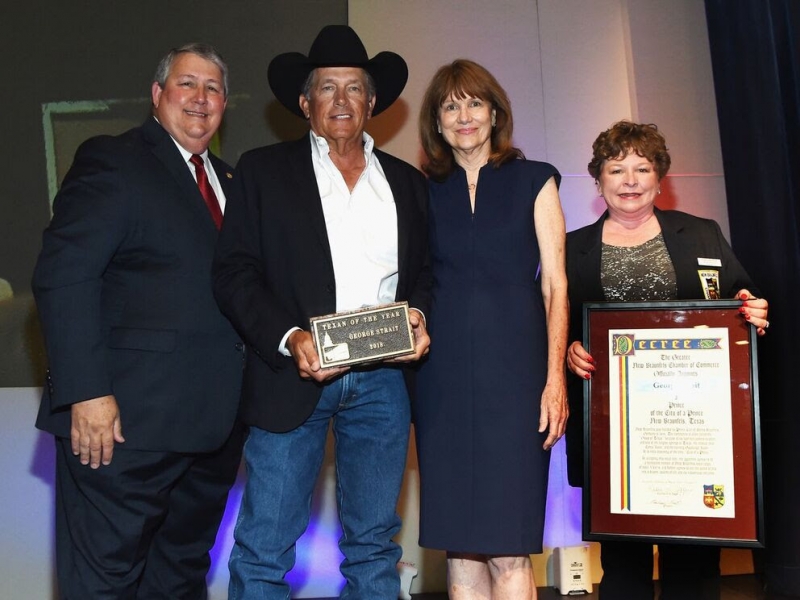 Iconic entertainer George Strait has been named “Texan of the Year” by the Texas Legislative Conference. At the 52nd annual statewide forum taking place at the Greater New Braunfels Chamber of Commerce on Friday, March 23, Strait joins an array of prominent honorees including former U.S. Presidents, Senators, Congressmen, Governors and innovators.

Strait was recognized for his many contributions to the state of Texas throughout the years, particularly within the last year for his role leading recovery efforts following the devastation of Hurricane Harvey. The Category 4 hurricane ties Hurricane Katrina as the costliest storm to impact the U.S., inflicting damage of over $125 billion and displacing more than 30,000 residents.

“I’m so proud to have grown up in the great state of Texas and so proud to be here today to accept this unbelievable honor,” shared Strait who accepted the award in person. “Texas is a big place filled with amazingly talented, smart people. How’d I end up up here?” a humbled Strait asked the crowd. “Last year was a tough one for our great state. We’re still continuing to recover and with the help of the many loyal, kindhearted Texans, we will get these communities back on their feet again. It’s never surprising, but always amazing how in times of need, how generous the American people can be.” Strait continued, “I’ve had a great career and always been supported by the people here in Texas. This great honor is the tip top of my list.”

Robin Jeffers, New Braunfels Chamber of Commerce Board Chair then surprised Strait with a proclamation crowing the King of Country with a new title, "A Prince of the City of a Prince" for his dedication to the betterment of their community.

Mary Jane Nalley, a longtime friend of Strait's and an owner of Gruene Hall noted, “George Strait’s elite work is still ongoing and he sets a fine example of what Texas and Texans are all about.”

This May, the reigning Texan of the Year is set to perform to over 50,000 fans at the New Orleans Superdome.