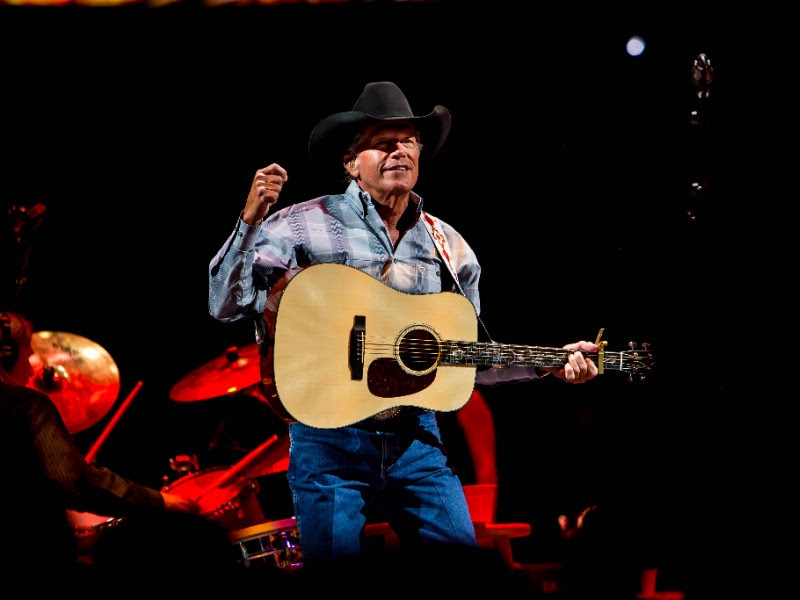 LAS VEGAS, Nev. – Earlier this week, Billboard critics picked their Top 10 career-defining George Strait songs, and with the most number ones of any artist in history—a record 60—the King of Country has offered a lot of variety for fans. However, there’s only one place you can hear them all across two nights and that’s at his July 28-29 T-Mobile Arena Las Vegas shows as part of his Strait To Vegas exclusive worldwide engagements which have been host to over 10 at-capacity shows since he retired the tour bus. At the end of 2017, he will have entertained 16 packed houses in Las Vegas with his last six serving up a little something different.

“After the April shows we decided we will do one more weekend in July with all the No. 1 hits and those crowd favorites I can’t not play,” says Strait, who has won every honor in the format from a GRAMMY Award for Best Country Album to multiple ACM and CMA Awards for Entertainer of the Year plus a coveted place in the Country Music Hall of Fame. “After that, I’m going to change things up for the last four of the year…not sure what’s in store, but I’m thinking about it,” he says teasing what’s to come at his final four of 2017.

Strait debuted the unprecedented two nights of No. 1’s during his T-Mobile Arena shows on April 7-8. With an unmatched 60 singles hitting the top of the charts during the span of his career and more than 280,000 fans streaming Strait's 60 No. 1 Hits playlist on Spotify every month, Strait wanted to showcase these radio hits plus several fan-favorites such as “Troubadour” that, surprisingly to many, never reached No. 1.

He did it by playing 30 No. 1 hits on April 7 and 30 No. 1 hits on April 8, all in chronological order in addition to those “can’t miss” classics from the early hits like “Fool Hearted Memory” and “You Look So Good In Love” to more recent hits including “River of Love” and “I Saw God Today” – and the 56 No. 1’s in between.

Strait stepped away from touring in 2014 with The Cowboy Rides Away Tour, culminating with a Texas-sized farewell concert at AT&T Stadium near Dallas that drew a record-setting attendance of 104,793. In 2015, he revealed that he would perform a limited series of exclusive, worldwide engagements at T-Mobile Arena in Las Vegas that commenced with a pair of at-capacity shows in April 2016 with fellow Texan Kacey Musgraves. In November, it was announced that the unparalleled, sold-out series would continue through 2017, including his most recent dates with GRAMMY-nominated singer/songwriter Cam.

Strait may have closed the book on touring, but the exclusive engagements at T-Mobile Arena provide him with a new page and the ability to connect with fans on his terms and create concert experiences that stay fresh and compelling. Rolling Stone called the historical Two Nights of Number Ones shows “extraordinary” and the Las Vegas Review-Journal duly noted that “Strait receives something like 10 standing ovations around the venue every night.”

Many of the songs that Strait will be performing during 2 Nights of Number 1’s are also featured on Strait Out of the Box: Part 2, available now. The three-disc, 56-track collection spans 20 years of Strait’s remarkable career from 1996 to 2016 and offers fans two new songs with “Kicked Outta Country” and “You Gotta Go Through Hell,” both of which Strait co-wrote. For more information, visit www.georgestrait.com or www.straittovegas.com.

About George Strait
George Strait is the undeniable “King of Country Music.” His music career spans more than 30 years; includes 60 No. 1 singles, more than any other artist in any genre; and boasts 33 Platinum or multi-Platinum-selling albums, more than any country artist and third across all genres behind only the Beatles and Elvis Presley. Strait is the only act in history to have a Top 10 hit every year for over three decades and has sold nearly 70 million albums and earned more than 60 major entertainment industry awards.

Strait, whose name has become synonymous with “real country” since his 1981 debut, was inducted into the Country Music Hall of Fame in 2006. He has since released five more albums, including the GRAMMY Award-winning Troubadour and his chart-topping release, Cold Beer Conversation. In 2014, he shattered the North American indoor concert attendance record by drawing 104,793 concertgoers to his The Cowboy Rides Away Tour finale at AT&T Stadium in Dallas. Strait performed six sold-out shows at T-Mobile Arena in 2016 as part of his Strait to Vegas exclusive concert series, extending his limited engagement into 2017 to 10 shows with two weekends of Two Nights of Number Ones.