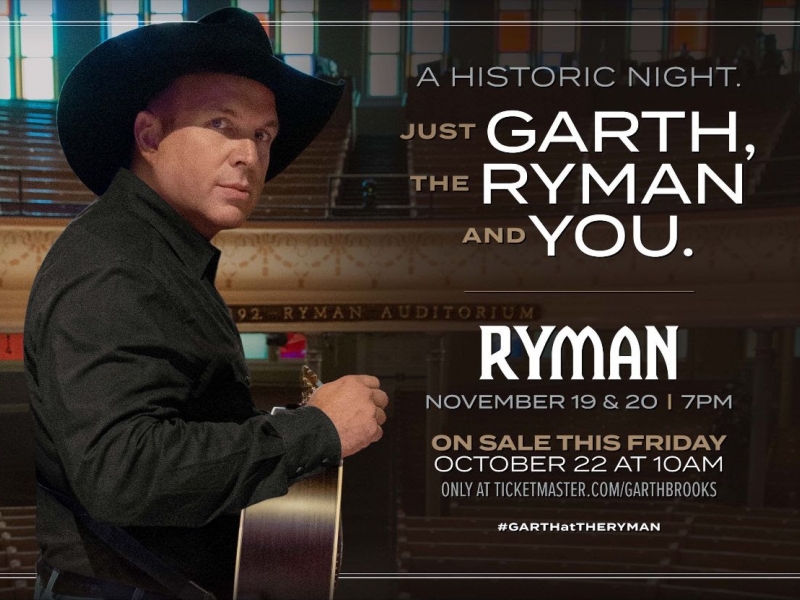 Intimate Concert Experience Set for November 19 and 20 Tickets On Sale This Friday, October 22 at 10 a.m. CT

NASHVILLE, Tenn. – Country music icon Garth Brooks today announced two back-to-back shows at Nashville’s historic Ryman Auditorium. Just Garth, The Ryman and You will give fans an intimate setting to hear stories behind the songs from the No. 1-selling solo artist in U.S. history. The event takes place on November 19 and 20 at 7 p.m. All tickets are $250, all fees included, and go on sale this Friday, October 22 at 10 a.m. CT at Ticketmaster.com/GarthBrooks. Tickets are limited to four per person. Proof of COVID-19 vaccination or negative test is required for entry.

About Garth Brooks
In May, Garth Brooks was one of five artists to receive one of the most prestigious honors an artist can receive, The Kennedy Center Honor. Garth is the first-ever seven-time recipient of the CMA Entertainer of the Year honor. Brooks is the first and only artist in history to receive nine Diamond Awards for the now nine diamond-certified albums at over 10 million album sales each. He remains the No. 1-selling solo artist in U.S. history, certified by the RIAA with 157 million album sales. Recently, he was awarded Country Touring Artist of the Decade at the 2021 Pollstar Awards. Last March, Garth received the esteemed Library of Congress Gershwin Prize for Popular Song. The event aired on PBS. He has received every accolade the recording industry can bestow on an artist.

After the success of "Garth & Trisha Live!" during prime time on CBS in April, CBS also aired "Garth & Trisha Live! A Holiday Concert Event," in December. Both specials featured Garth and Trisha taking song requests through Facebook, live from their studio, Allentown, in Nashville.

In November of 2019, A&E aired "Garth Brooks: The Road I'm On," over two consecutive nights. Part of their esteemed 'Biography' franchise, the documentary offered an intimate look at Garth's life as a musician and father over his entire career.

In January 2020, Billboard announced that Garth Brooks was the first artist to make it on the Billboard Hot Country Songs chart in the 80s, 90s, 00s, 10s and now 20s. Garth debuted "Much Too Young (To Feel This Damn Old)" in 1989. Now, with "Dive Bar," a duet he sang with Blake Shelton, he makes his appearance on the list in 2020. The single inspired a DIVE BAR tour to dive bars in country music capitals around the country which will continue its run of stops through 2022.

Last year, Garth went vinyl with his meticulously-curated vinyl package, LEGACY. This career-defining collection includes No Fences, The Chase, In Pieces, Fresh Horses and Triple Live, plus CDs with bonus tracks for a total of 7 vinyl albums and 7 CDs in each edition.

In March 2019, Garth launched The Stadium Tour, which has broken stadium attendance records at every stop on the tour so far. Pollstar announced at the end of last year that The Garth Brooks Stadium Tour was the best selling country music tour of 2019. In 2017, Garth finished the three-and-a-half-year long Garth Brooks World Tour with Trisha Yearwood. The tour sold over 6.3 million tickets, making it the biggest North American tour in history and the biggest American tour in the world.

Garth also has Inside Studio G, a weekly Facebook Live series. It airs every Monday on Garth's Facebook page at 7:00 PM EST.

You can follow him at:https://www.facebook.com/GarthBrookshttps://twitter.com/garthbrookshttp://instagram.com/garthbrooksFor more information please visit www.garthbrooks.com
About Ryman Auditorium
A National Historic Landmark, Ryman Auditorium was built by Captain Thomas G. Ryman in 1892. Ryman Auditorium is a 12-time winner of the prestigious Pollstar Theatre of the Year award. The historic venue is well-known as the Mother Church of Country Music and is the most famous former home of Grand Ole Opry (1943-1974). The Ryman has been featured in numerous film and television projects including Coal Miner’s Daughter, The Johnny Cash Show, American Idol, Nashville, and more. While offering a diverse lineup and thriving concert schedule (with over 200 shows per year), the venue is also open for daytime tours year-round. A coveted under-play for many, her iconic stage has seen the likes of Bruce Springsteen, Mumford and Sons, and Tom Petty in recent years. Ryman Auditorium is owned by Ryman Hospitality Properties, Inc. (NYSE: RHP), a Nashville-based REIT that also owns and operates the Grand Ole Opry, 650 AM WSM and Ole Red. For more information, visit ryman.com.