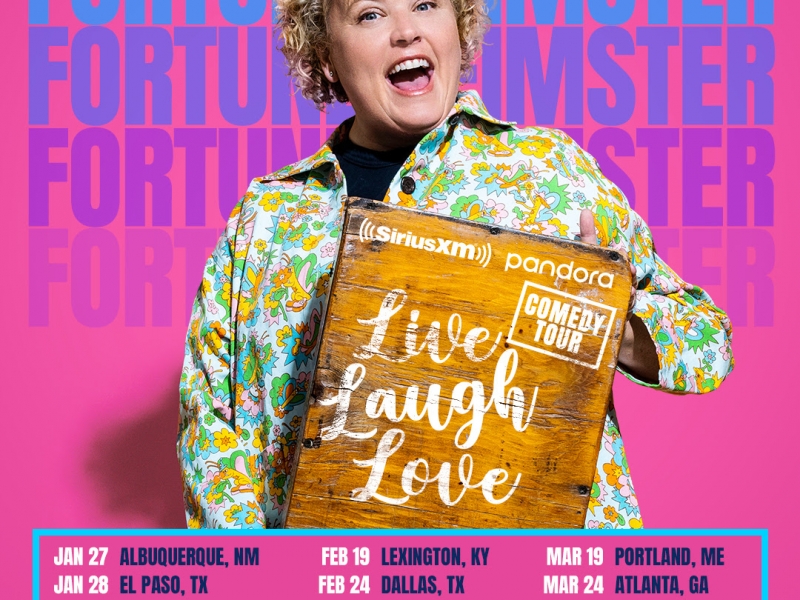 Comedian to Appear in 20+ Cities Across U.S.

Feimster Featured on CBS Saturday and in PEOPLE Magazine, On Stands Now

“There is nothing better than performing live and with every tour the shows just get more and more fun. I can’t wait to get back on the road and share new stories about my life and family,” shares Feimster. “I named the tour ‘Live Laugh Love!’ because of those infamous signs you see in a lot of mom’s homes…my mom being no exception. And when I got older, I realized I too had one of those signs and thought ‘uh oh, I’m becoming my mom.’ What that means will be revealed on the tour. Plus, who doesn’t want to live, laugh, and love?”

Affable, charismatic, and one of a kind, Feimster uses her confessional comedy to bring people together. Through laughter and storytelling, she shows audiences of all ages, backgrounds, and sexual orientations that common ground is only a joke or two away. She has expanded on that commonality with her new special, “Good Fortune,” with Decider noting, “Feimster remains the fun aunt, cousin, or friend you want to sidle up to at the party.” Beginning Jan. 27, fans can do just that, as CBS News opines the comedian is, “having a moment.” She brings stories from her life along with lots of laugher and love to over 20 cities across the U.S. from Portland, Maine, to Atlanta, Georgia, and Charleston, South Carolina to Las Vegas, Nevada.

ABOUT FORTUNE FEIMSTER
Stand-up comedian, writer, and actor, Fortune Feimster has been building an innovative, inclusive, and unique career for more than 20 years. Be it on the road, her radio show, film, or television, her contagious and joyous comedy is touching lives and bringing us together daily. It has made her one of the busiest women working today. She first became known as a writer and panelist on E's hit show Chelsea Lately, and then starred as a series regular on The Mindy Project for Hulu and Champions for NBC. She has gone on to have many guest appearances on TV shows including Claws, 2 Broke Girls, Workaholics, Glee, Dear White People, and Tales of the City, as well as recurring roles on Showtime's The L Word: Generation Q and CBS's Life In Pieces.

She's had memorable roles in the movies Office Christmas Party, Social Animals, and Father of the Year. She also recently voiced the role of Evelyn on The Simpsons, she's the voice of Brenda on Bless the Harts for Fox, and she voices Ava on Summer Camp Island for the Cartoon Network.
When not acting, Fortune tours the world doing standup. Her just released one-hour special on Netflix, “Good Fortune,” along with her first, "Sweet & Salty," were met with great critical acclaim. She’s appeared as a guest on late-night including “The Late Show with Stephen Colbert,” “Jimmy Kimmel Live,” “Late Night with Seth Meyers,” “Conan” and more. Her previous half-hour specials on Comedy Central and on Netflix's season one of “The Standups” led Decider to rave, “her presence is positively inspirational.”

As a writer, Fortune has teamed up with some of the industry's greatest. She created and starred in the Tina Fey produced pilot Family Fortune for ABC. Additionally, Steven Spielberg's production company, Amblin, recently acquired two features Fortune wrote, Bad Cop, Bad Cop and Field Trip, both of which she is attached to star.

She recently wrapped filming on a big Netflix action series with Arnold Schwarzenegger and she
can currently be heard every morning on Sirius XM's channel 93 for Netflix with Tom Papa. On their show, What A Joke with Papa and Fortune, they interview tons of comics and talk all things comedy. She also hosts a weekly podcast with her partner, Jax, called Sincerely Fortune.