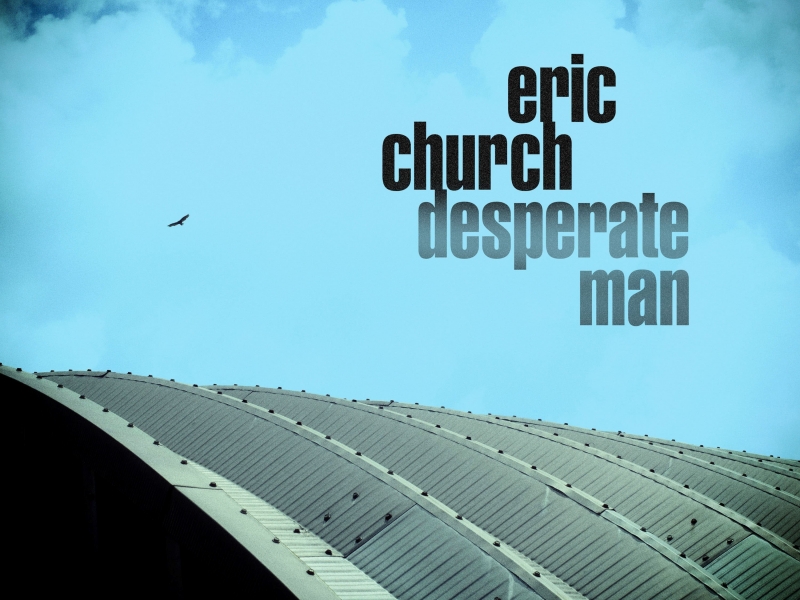 In August’s candid Rolling Stone cover story shortly after Eric Church announced his sixth album was in the works, readers learned exactly what the North Carolinian has been shouldering since his Holdin’ My Own Tour wrapped last May. It was the first time the songwriter had spoken out regarding the turmoil and angst of the last year, his processing of it all and the outcome: a collection of 11 songs that tell a broader story with today’s release of Desperate Man.

His longest stretch amid albums, Church’s pause between Mr. Misunderstood and Desperate Man was intentional. “I still felt shook up pretty good,” he says of the time he took following a serious health scare and having performed at Route 91 Harvest festival in Las Vegas, where dozens of country music fans lost their lives. “I wasn’t ready yet, wasn’t settled from all that happened – I was still reeling from Vegas, I felt displaced and not really connected to anything. I had to get back to enjoying what we were making and finding refuge in the music as a bit of an anchor.”

But then came a breakthrough for the man Music Connection declares “a frankly magnificent songwriter,” in the form of two songs that represented an entirely new direction.

“The Snake” – the first song greeting listeners on the album described by Esquire as “brilliant” – is a menacing, spoken-word parable with a political undertone. “The rattlesnake and the copperhead—that’s left/right, blue/red, however you say it,” says Church. “They sit there and fight all day to rile people up and then go get a drink. They’re working together while the whole world is burning down.”

Then, immediately after, he wrote a simple song called “Hippie Radio,” an acoustic meditation on the ways that music is there to mark different phases in your life. And suddenly, Church started to get a notion of where this project might be headed – to a place Rolling Stone dubs “classic Church: expertly crafted and country radio-friendly, while also pushing boundaries in a way that sounds natural and unforced.”

His songwriting prowess serves as the backbone of the project, with Vulture noting that his “devastating pen is pushed to center stage” as “Desperate Man weaves excellence out of ordinary threads.” Church, who had a hand in writing all 11 songs on the album, is also praised by the LA Times as “one of Nashville’s most forthright truth-tellers,” resulting in “a warm, appealingly ragged collection infused with wisdom and reassurance” which American Songwriter declares as “his most adventuresome album yet.”NPR opines in this week’s First Listen, “On Desperate Man, Church embodies his heroic image even more completely and convincingly than he has on the five albums that came before it.” As the New York Times acknowledges, "Church has never been an easy fit into Nashville's familiar boxes - his music is as much rock as it is country" with Stereogum observing that this renegade spirit is what sets him apart: “Church is someone who’s at the top of his genre because he breaks its rules in big, exciting, arena-filling ways. If that’s not a rock star, I don’t know what is.”

The three-time Country Music Association and seven-time Academy of Country Music Award winner confessed to American Songwriter in their September/October cover story, “For how far we have evolved, we still have the same basic problems. We are all broken, and we are all going to break. It doesn’t matter how far we’ve come or how many pills we come up with or how much technology distracts us; we still want the same things. And you can get through anything in your life with a jukebox, and a bar,” [“Jukebox And A Bar” is one of three songs Church penned solo on the album].

And its closing track, “Drowning Man,” addresses the state of our times and the ways artists have (or haven’t) responded. “With what’s going on in the world, I felt forgotten, left behind,” says Church. “And if you go to any bar or concert in America, there are whole groups of forgotten people who are very much alike, who have more in common than not. There’s a lot of madness in the world that makes no sense, and it’s not all high tides and yachts.”
Newsday recognizes this sentiment while praising “Church’s skill as a songwriter and a singer,” noting that he “doesn’t sugarcoat anything, but still manages a positive outlook, even if, as he does in ‘Drowning Man,’ all he can do is offer an escape.”

Desperate Man and tickets to Church’s 2019 Double Down Tour are available today, October 5. Get the album here and visit EricChurch.com for ticketing information.