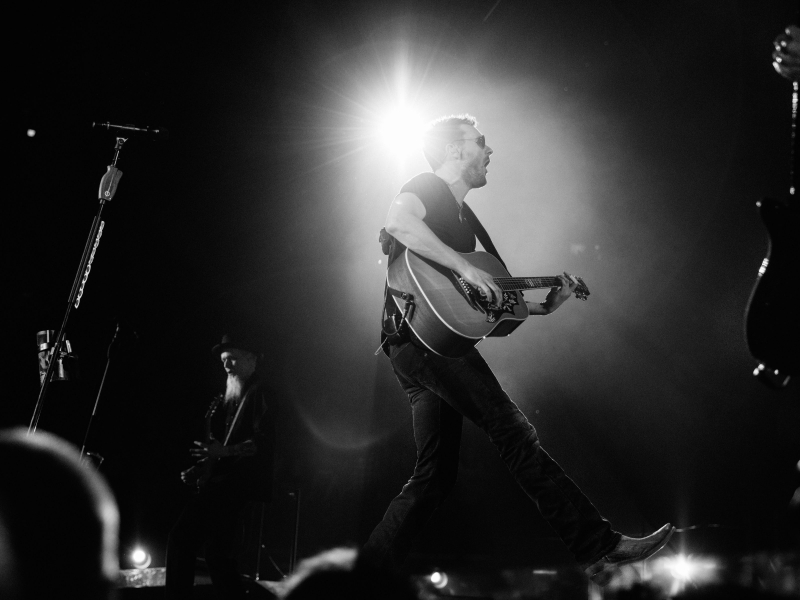 NASHVILLE, Tenn. – Having played 60 shows in just four months, Eric Church will end his tour with two sold-out shows at Nashville, Tennessee’s Bridgestone Arena this Friday, May 26 and Saturday, May 27. The final two cap-off his cross-continent, completely sold-out Holdin’ My Own Tour. The double-set/sans-opener show will deliver three+ hours of music pulling from Church’s full discography.

The No. 1 most attended music tour in the world so far this year (Pollstar) has been dominating charts and breaking records occupying ALL top five spots on May 15’s Billboard’s Country Boxscore with Church’s sell-outs of his April & May shows in Tampa, Fla.; Greenville, S.C.; Uncasville, Conn.; Pittsburgh, Pa. and Cincinnati, Ohio totaling more than 81,000 fans in attendance for those five shows alone. On May 5, Church shattered Florida’s Jacksonville Veterans Memorial Arena’s attendance record with an unprecedented 13,591 in capacity. The tour has also sold out every tour stop despite cancelling more than 33,000 tickets listed on the secondary market in an effort to reduce the activity of ticket scalpers.

Just hours away from his tour finale, Church will once again open a pop-up store in East Nashville (address: 218 South 11th Street) for the third consecutive year in celebration of his performance at the Nissan Stadium during this year’s CMA Festival with a portion of the proceeds benefiting he and wife Katherine’s non-profit Chief Cares that serves over 2.5 million people around the globe with charitable giving. For more information on Chief Cares Fund, visit www.ericchurch.com/chiefcares.

The pop-up store will be open Friday, May 26 through Sunday, May 28 from 10 a.m. to 6 p.m. where it will feature rare items including Church’s Gibson Hummingbird Dark Signature autographed guitar and custom Jack Daniel’s barrels. The store will open again Thursday, June 8 through Sunday, June 11 during the same hours and will feature exclusive merchandise unavailable anywhere else, like a custom Orion Cooler and vintage tour T-shirts and posters.

Mr. Misunderstood’s devotees have one more chance at making it to one of the sold-out Holdin’ My Own finale shows at Bridgestone Arena. If they come in to the Nashville pop-up store beginning May 26, and purchase the store’s exclusive poster, they have a chance of finding a pair of tickets to that night’s show. There will be hidden tickets for both the Friday and Saturday shows.

This year Church will debut a never-before-seen design of his These Boots by Lucchese cowboy boot line Bridgestone Arena shows May 26 and 27. The design is called The Chattanooga Lucy after the “the most thrilling country dance tune to come along in ages” (Rolling Stone Country) from his fifth studio album, Mr. Misunderstood.

During CMA Festival store hours, fans will be able to purchase a pair of The Chattanooga Lucy design as well as the rest of These Boots by Lucchese that have previously been seen on the Holdin’ My Own Tour at the pop-up store. The line was developed in September of 2014 after Church visited the Lucchese factory to infuse his personal style into 10 different – his and hers—designs. Each pair is handmade by Lucchese artisans in El Paso, Texas and has Church’s handwritten lyrics to “These Boots” etched into the sole. Previously, These Boots by Lucchese were only available to VIP ticketholders at his concerts and at select pop-up stores, however they can now be previewed online at http://www.ericchurch.com/theseboots.

Church supporters wanting to get a virtual sneak peak of the pop-up store can visit Church’s Facebook pageThursday, May 25 at 11 a.m. CT to get a tour via Facebook Live.

An extremely limited, autographed Hummingbird Dark, Church’s signature Gibson Guitar, will be featured at the pop-up store. The sleek custom design was debuted in the music video for “Record Year,” Church’s second single from his fifth studio album, Mr. Misunderstood. Church is among iconic artists Bob Dylan, Jackson Browne, Emmylou Harris and Pete Townshend who have also been asked to design their own guitars.

Fans who will be in town for CMA Fest and missed Church’s two-night show at Bridgestone can catch The Chief at Nashville’s Nissan Stadium Friday, June 9 at 10 p.m.

Eric Church announced eight more shows for 2017 after his Holdin’ My Own Tour ends; those remaining 2017 performances are as follows: