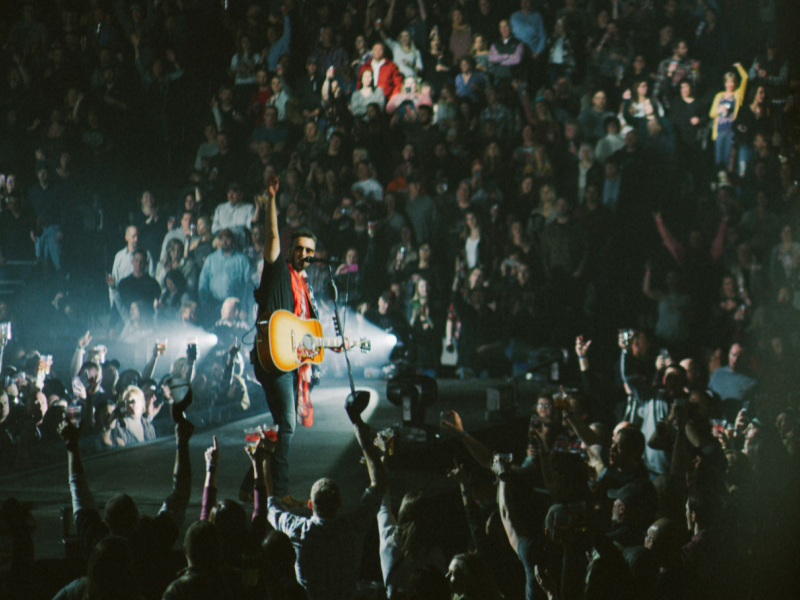 It was five songs in to his set before Eric Church addressed the sold-out crowd at the CHI Health Center in snowy Omaha, Nebraska on Friday night, the first of two shows kicking off the Double Down Tour, proclaiming “it’s gonna be a journey, so buckle up... We’re gonna have a lot of fun tonight.” He stood beneath a 137,000-pound lighting rig that ran from his stage all the way to the back row of the arena on the 10-bus and 18-truck tour, clearly enjoying his return to the stage after a 16-month hiatus from touring to write, record and release Desperate Man.

Church took more than 30,000 total fans on unique journeys sans opening act each night, covering a range of songs off all six of his studio albums – from his debut single “How ‘Bout You” to his many No. 1 hits including “Drink In My Hand,” “Springsteen” and “Record Year,” as well as an extensive offering of tracks off his current album, Desperate Man. Across both shows, Church owned the stage for more than seven hours to play nearly 70 songs – only 13 of which appeared on both set lists, upholding his promise to make every show completely its own.

He paused often throughout the marathon sets to reflect on the Omaha crowd’s enthusiasm – retrieving fans’ American flags to passionately sling around his neck for the remainder of each show and even taking song requests from the audience – visibly awed by the energy of the Church Choir filling the arena from top to bottom and setting a promising standard for the 18 cities to follow.

Rolling Stone raved about “the vibe of the tour’s opening night, one where loose, funky explorations were given just as much space as the singer’s radio hits,” while the Omaha World-Herald praised Church for the “epic” two-night stand, remarking on how he “roamed the stage with his guitar slung across his back like some kind of country music warrior seeking someone to slay with his songs... and his fans followed along at every turn.” The Reader agreed, asserting of the second show that “it didn’t matter if it was your first Eric Church concert or your second one of the week, Saturday night’s Double Down show was an absolute joy and a victory lap for arguably the biggest artist in modern country music.”

Church’s Double Down Tour continues in the unique back-to-back night format for the next four months before coming to a crescendo with a one-night only supersized show at Nashville’s Nissan Stadium, where he will more than double the attendance record set at Music City’s Bridgestone Arena in 2017.

Fans can continue the celebration of Church’s music at home with the upcoming colored vinyl releases of three classic albums. His Gold-certified debut Sinners Like Me will be re-issued on red colored vinyl in its second pressing. The album including Top 20 hits “How ‘Bout Me,” “Two Pink Lines” and “Guys Like Me” and available for pre-order now is set to be released this Friday, January 25.

Church’s 3x Platinum album Chief which landed atop both the Billboard 200 and Billboard Country Albums charts will follow on February 15, also being re-issued in red vinyl for its second pressing. The album featuring No. 1 hits “Drink In My Hand” and “Springsteen” as well as Top 10s “Like Jesus Does” and “Creepin’” is also available for pre-order now.

Rounding out the collection is the fourth pressing of his Platinum-certified sophomore album, Carolina, featuring Top 10 songs “Love Your Love the Most” and “Hell on the Heart.” The album celebrating its tenth anniversary will be released on yellow vinyl and is also available for pre-order now in advance of its April 5 release date. For more information on all upcoming releases as well as the Double Down Tour, visit www.ericchurch.com.

About Eric Church
The three-time Country Music Association and six-time Academy of Country Music Award winner released his highly-anticipated album Desperate Man atop the Billboard Country Albums chart on October 5. The album also debuted at No. 5 on the all-genre Billboard 200. Rolling Stone describes the album as “classic Church: expertly crafted and country-radio-friendly, while also pushing boundaries in a way that sounds natural and unforced” and American Songwriter notes that it “sublimates the pain of a tumultuous year into his most adventuresome album yet.” Church has returned to the road for his 2019 Double Down Tour, visiting 19 markets for back-to-back nights of two unique shows sans-opening act to give fans 6+ hours of his iconic music in each city. The tour also includes a massive stop at Nissan Stadium in Nashville where Church will more than double the attendance record set at Bridgestone Arena in 2017. For more information visit www.ericchurch.com, download the new Eric Church app and follow on Facebook and Twitter @ericchurch and on Instagram @ericchurchmusic.