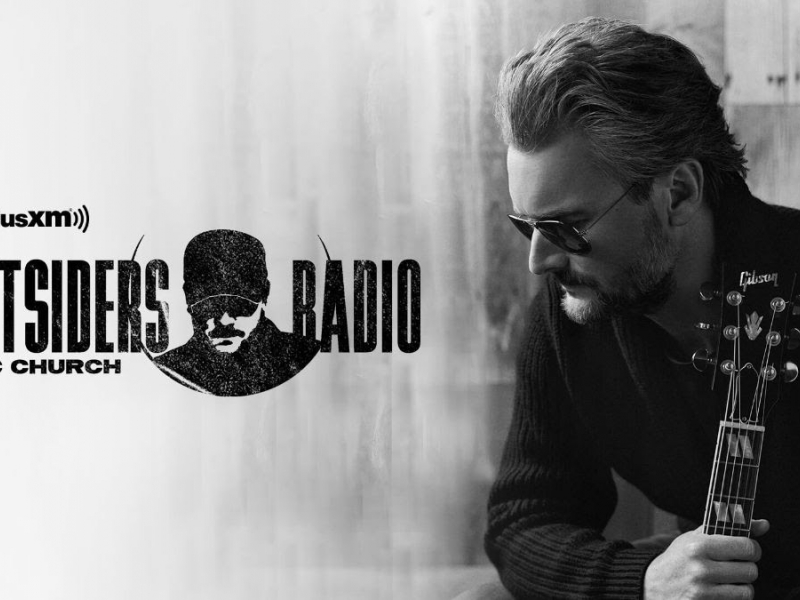 Eric Church Outsiders Radio will showcase music from Church’s career, including his vast catalog of nearly two decades that has earned him seven ACM Awards, four CMA Awards (including 2020 Entertainer of the Year) and 10 GRAMMY nominations. Curated by Church himself, the channel will be a journey through his musical experiences featuring collaborations and recordings with friends along with behind the scenes stories. Listeners will also hear songs that inspire Church as a fan of music, from rock to country and beyond by artists including George Strait, Bob Seger, Ashley McBryde, Ray Wylie Hubbard, Waylon Jennings, Merle Haggard, Aretha Franklin, Kenny Chesney, Bruce Springsteen, Brandi Carlile and more.

“We're trying to be thoughtful about how we play the music and why the music matters,” shares Church on the curation of his new channel for SiriusXM. “This is about something that you actually go, oh, that's cool. That, I haven't heard that. So, chasing that pathway is what gives me excitement about what we're trying to do here with Outsiders Radio.”

Eric Church Outsiders Radio will launch on Friday, Nov. 4 on the SXM App. The SXM App is available to subscribers on mobile devices and a wide variety of connected platforms in the home including smart speakers, smart TVs and streaming media players. Streaming access is included with all of SiriusXM’s audio trials and most popular plans. Additionally, the channel will also be available to subscribers nationwide in the car on SiriusXM channel 61 from Nov, 4 through Nov. 6.

The exclusive channel is the latest in a longstanding relationship between SiriusXM and Church, who originally launched his exclusive monthly show, Outsiders Radio, on SiriusXM’s The Highway in February 2015. Outsiders Radio explored the country music singer/songwriter’s personal music influences with Church playing his current favorites as well as exclusive, never before heard music from his own archives.

About Eric Church
Eric Church’s most recent critically acclaimed and chart-topping project, his three-part Heart & Soul, is available everywhere now. Featuring the results of a marathon session during which he spent nearly a month writing and recording a song per day while sequestered in rural North Carolina, the project features his latest Gold-certified No. 1 “Hell of a View” and recent Top 5 hit “Heart On Fire” as well as current single “Doing Life With Me.”

Just as unique as Church’s approach to recording and releasing music is his tenacity on the road. He recently wrapped his 55-city The Gather Again Tour, visiting full-capacity arenas for an in-the-round show on the Billboard Music Awards Top Country Tour, in addition to a recent headlining spot alongside George Strait and Metallica during the ATLive festival at Mercedes-Benz Stadium and his own one-of-a-kind headlining stadium shows at Milwaukee’s American Family Field and Minneapolis’s U.S. Bank Stadium. Church also took to the field at Tampa Bay’s Raymond James Stadium in 2021 to perform the National Anthem ahead of Super Bowl LV, and during 2019’s Double Down Tour he played back-to-back nights of two unique shows in each market sans opening act, giving every city’s fans six-plus hours of his iconic music. The tour also featured a massive stop at Nissan Stadium in Nashville, where he broke the venue’s concert attendance record with more than 56,000 fans in attendance and became the first artist to sell out the venue with a solo lineup.