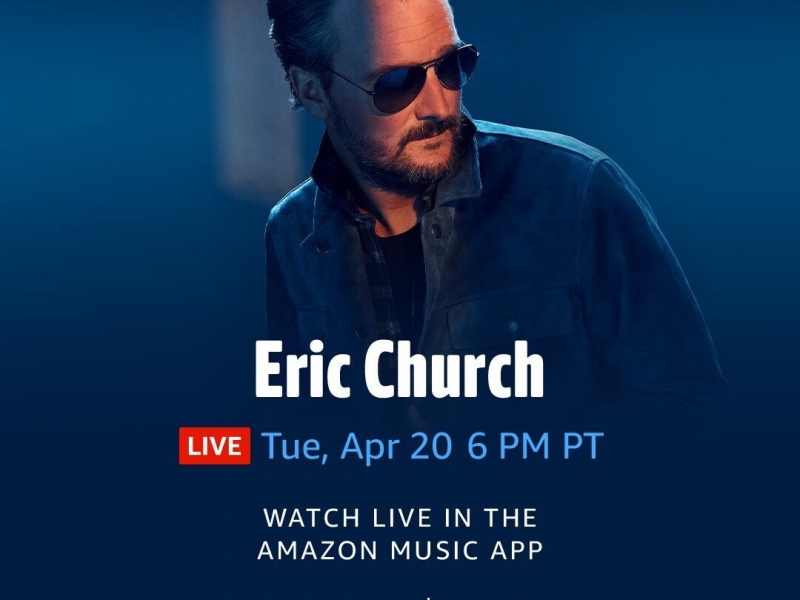 Amazon Music announced today that 10-time GRAMMY nominee Eric Church will share an exclusive performance and live Q&A for fans on April 20. Following the release of Heart this Friday, the first album from his highly anticipated new three-part project, Church will perform new music, including “Rock And Roll Found Me” from Soul for the first time ever ahead of the album’s release next Friday. Starting at 8 p.m. CT on April 20, fans can watch along via the Amazon Music Twitch channel and within the Amazon Music mobile app. The performance will also be available to watch on the Amazon Music Twitch channel for four days afterwards.

Heart & Soul was born from a secluded session in rural North Carolina, where Church and his collaborators wrote and recorded a song from start to finish each day for nearly a month. The three-part, 24-song collection from the man Stereogum praises as “the most consistently interesting star in the Nashville ecosystem” begins with Heart, out this Friday, April 16, and concludes with Soul, out next Friday, April 23. In keeping with his longtime commitment to put fans first, Church created the middle album, &, specifically for the Church Choir and will make it available exclusively to those fans and only as a vinyl record on Tuesday, April 20.

To gear up for the event, fans can now explore Eric Church’s full discography on CD and Vinyl in his Amazon Music Store, featuring 22 Gold, Platinum and multi-Platinum certified singles off Gold-certified Desperate Man (“Some Of It”), Platinum-certified Sinners Like Me (“How ’Bout You,” “Guys Like Me”), Carolina (“Smoke a Little Smoke,” “Love Your Love the Most”) and Mr. Misunderstood (“Record Year,” “Round Here Buzz”), Double-Platinum certified The Outsiders (“Like a Wrecking Ball,” “Talladega”) and 3x Platinum-certified Chief (“Springsteen,” “Drink In My Hand”).

About Eric Church
Reigning CMA Entertainer of the Year and 10-time GRAMMY nominee Eric Church has spent the past year releasing new music at a relentless pace; providing a glimpse into the results of a marathon writing session during which he spent nearly a month writing and recording a song per day – including current Top 15 single “Hell of a View” – while sequestered in a rural North Carolina cabin, and fueling speculation around his highly anticipated new three-part project, Heart & Soul, set for release this month.

Just as unique as Church’s approach to recording and releasing music is the seven-time ACM and four-time CMA winner’s tenacity on the road. During his most recent outing, 2019’s Double Down Tour, Church played back-to-back nights of two unique shows in each market sans opening act, giving every city’s fans six-plus hours of his iconic music. The tour also featured a massive stop at Nissan Stadium in Nashville, where he broke the venue’s concert attendance record with more than 56,000 fans in attendance and became the first artist to sell out the venue with a solo lineup. Church also took to the field at Tampa Bay’s Raymond James Stadium earlier this year to perform the National Anthem with R&B star Jazmine Sullivan ahead of Super Bowl LV and will return to the road with The Gather Again Tour this fall.

About Amazon Music
Amazon Music reimagines music listening by enabling customers to unlock millions of songs and thousands of curated playlists and stations with their voice. Amazon Music provides unlimited access to new releases and classic hits across iOS and Android mobile devices, PC, Mac, Echo, and Alexa-enabled devices including Fire TV and more. With Amazon Music, Prime members have access to ad-free listening of 2 million songs at no additional cost to their membership. Listeners can also enjoy the premium subscription service, Amazon Music Unlimited, which provides access to more than 70 million songs and the latest new releases. And with Amazon Music HD, customers have access to the highest-quality listening experience available, with more than 70 million songs available in High Definition (HD), millions of songs in Ultra HD, and a growing catalog of 3D Audio. Customers also have free access to an ad-supported selection of top playlists and stations on Amazon Music. All Amazon Music tiers now offer a wide selection of podcasts at no additional cost, and live streaming in partnership with Twitch. Engaging with music and culture has never been more natural, simple, and fun. For more information, visit amazonmusic.com or download the Amazon Music app.