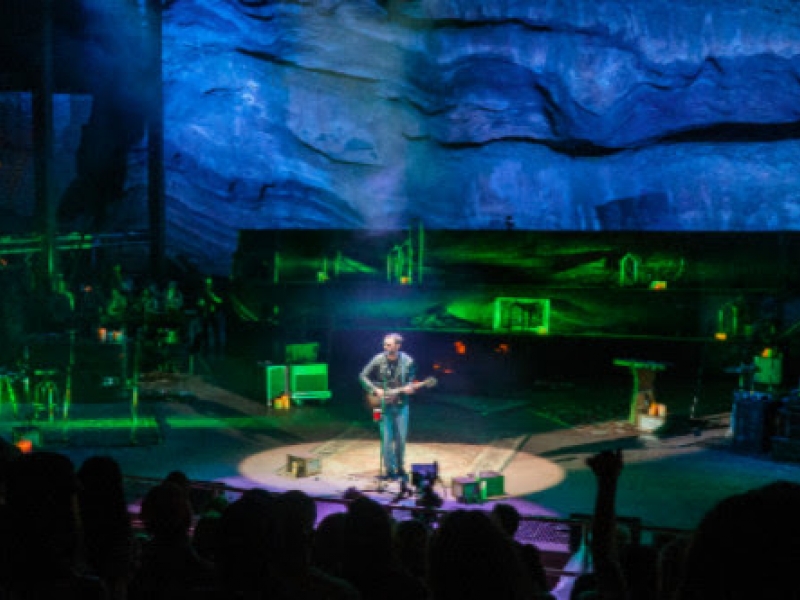 MORRISON, Colo. (Tuesday, August 9, 2016) – With the camera lens so close it was reflected in his signature aviators,Eric Church spoke directly to his fans just minutes before taking the stage for his first of two solo shows at the majestic Red Rocks Amphitheater alerting the thousands watching viaFacebook Live as well as the sold-out crowd of his plans to tour in 2017. He revealed that his North American 60+ city run, the aptly titled Holdin’ My Own Tour, will officially launch on Jan. 13, 2017 at Lincoln, Neb.’s Pinnacle Bank Arena and include stops in Chicago, Ill., Los Angeles, Calif., and will conclude with two nights at Nashville, Tenn.’s Bridgestone Arena in May.  For the first time ever, there will be no support act on this tour. Eric Church and the ECB will play two full sets with an intermission in between. In an effort to ensure his core fans get great tickets at face value, Church is revamping the pre-sale and on-sale process to eliminate scalpers from the equation.

“In this era where growing inequality seems to be the norm, we wanted to do everything within our power to put the advantage back in the hands of true fans rather than those that take advantage of the system, and by extension our people,” said John Peets, Church’s manager. “It was important to us to invest time into evaluating and redesigning the ticket buying process and build the technology to level the playing field.”

Church and his team have developed a new fan club pre-sale system that will allow them to remove scalpers from the pre-sale process before it even happens. Church Choir members will pre-register for the fan club pre-sale prior to it starting. Once verified, fan club members will receive buy links via text message when the pre-sale starts. Scalpers that are found to be gaming the system and posing as real fans won’t receive the buy link at all.

Church has secured a larger allotment of fan club tickets than in the past so Church Choir members will have much better success buying tickets in the pre-sale.  The Church Choir pre-sale will be the ONLY pre-sale. There will be no venue, credit card or radio pre-sales.

As on past tours, Church will continue to cancel any and all orders found to be made by scalpers.  New for the Holdin’ My Own Tour, Church commissioned a proprietary technology that scrubs ticket purchases using up to 10 different data points and automatically flags orders made by scalpers.  Orders may be cancelled at any time and without warning.  Church cautions fans to stay away from the secondary market because it’s likely that tickets found there will be invalid by the time the show happens.

Finally, delivery of all ticket orders will be delayed until the days leading up to each show.  Church hopes that this will make it impossible for scalpers to complete their transactions.

By doing this – investing time and energy to create a more efficient and balanced model – the Church team is not only communicating directly to the fans the best source for face value tickets, but also building a model that protects consumers and can be adopted by the industry as a whole.

“The way this album came together mandated we release it as a surprise, straight to our fans, as it was important for me to deliver the music the same way the creativity hit me—directly and swiftly. What I didn’t anticipate is that it left me scratching my head a little as this year was supposed to be spent writing.”  Church continues, “What this year’s open schedule did afford us was time to think through the way the fans experience our music live, and it was important to us that we find a way to stick to these same principles when it came to approaching our shows, down to the way they go on sale.”

Pre-sale purchase links and unique codes will be sent directly via text message to pre-registered standard and premium fan club members, affording them a three-day window to purchase tickets to the Holdin’ My Own Tour. This fan club pre-sale begins at 11 a.m. CT on Friday, Sept. 9 and ends on Sunday, Sept. 11 at 11:59 p.m. CT.

Church’s announcement comes on the heels of his single, “Record Year,” from his album Mr. Misunderstood, hitting No. 1 Aug. 1 and in the middle of his two-night, sold-out stint at Red Rocks, one of his few 2016 performances.

For further details on the ticketing system plus information on VIP packages, "These Boots by Lucchese" and Church's custom-designed Gibson Hummingbird Dark on tour, stay tuned to www.ericchurch.com.