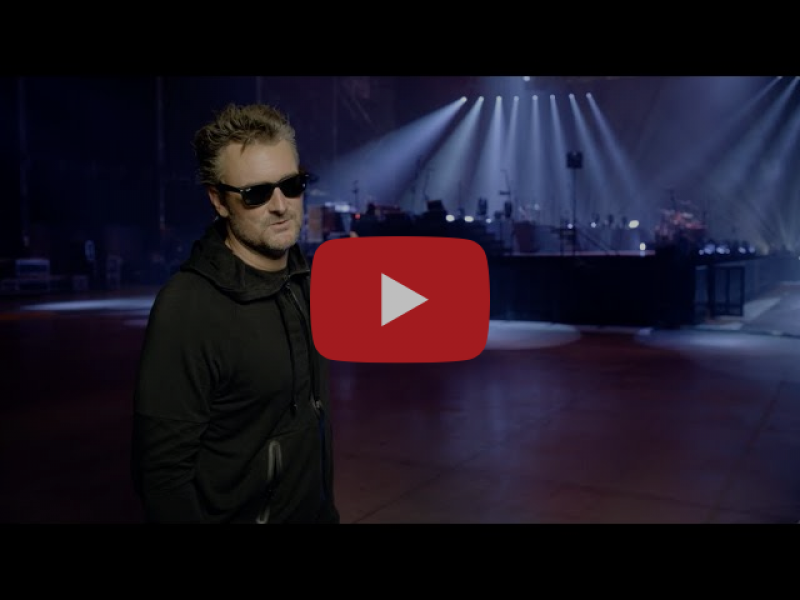 Reigning CMA Entertainer of the Year Earns Repeat Nod in the Top Category, Tied for Most Nominations with Five Total55-City Tour Kicks Off This Friday, September 17 in Lexington, Ky.

NASHVILLE, Tenn. – For reigning CMA Entertainer of the Year Eric Church, each tour is an opportunity to re-imagine the limits of what’s possible; to bring something new to the fans. For his most recent outing, 2019’s Double Down Tour, that meant playing back-to-back nights in each market with completely different set lists and setting a concert attendance record at Nashville’s Nissan Stadium – sans opening act – with 56,521 fans singing at the top of their lungs well past midnight.

Now, just days away from the launch of The Gather Again Tour where he will perform a full tour from an in-the-round stage for the first time ever, Church carries with him five nominations for the upcoming CMA Awards, including an opportunity to retain the top honor of Entertainer of the Year. With four additional nominations, for Male Vocalist of the Year, Album of the Year (Heart), Single of the Year and Song of the Year (both for “Hell Of A View”), Church is tied for the most nods this year and brings his all-time count to 35 total nominations.

For the man Billboard celebrates as “a touring juggernaut” and Pollstar regards as “one of the most successful touring country artists,” this return to the road – especially after nearly 700 days away from full-time touring – means going all in. Just as Church and his band hunkered down in rural North Carolina to create his chart-topping and critically-acclaimed triple album, Heart & Soul, the core group once again tucked away in a musical bootcamp, setting up shop in Lititz, Pennsylvania for two weeks to rehearse for the upcoming tour.

“The hardest thing I’ve done thus far in my career is this setlist,” Church shares of the extensive preparations in a rare behind-the-scenes look at the inner makings of a live show. “It’s not a normal record; it’s three. So, you add 28 songs to what we already had going, which is a pretty stacked and packed setlist, and when you start to try to get rid of stuff and change it every night – which I’m committed to; we’re still going to play the different set, we’re going to give people different experiences – it has been maddening.

“It’s the most musical we’ve ever been,” he continues. “To see the way the new music happens in the show is something that I’m excited just to see and, also, we’re trying to reimagine songs that we’ve played 100 times, playing them different, and that’s just fun. It’s fun for us to do. There’s going to be a lot of songs that fans aren’t gonna recognize at first, that we’re gonna start singing and they’re going to go ‘oh yeah, that’s that song.’ So, I think it’s just fun after this many years to change it up and make it about music; make it musical. I’m just excited to see the reaction.”

After such thorough rehearsals, the 10-time GRAMMY nominee has now made himself at home on the 2,400 square foot multi-level stage – which will be positioned in the center of each arena floor and accompanied by 11 busses, 20 trucks, a 127,000-pound lighting rig and four 836 square foot video walls – and he is primed to deliver a brand-new version of the high-octane live show his Church Choir fans have come to love.

“I’ve never played a stage like this in my career... I’ve never seen anybody play one like this,” notes Church of his first-ever in-the-round setup. “There’s really no front… It’s kind of like a cage match. I mean once we get out there the crowd is everywhere. They’re behind you, they’re on the sides, and I love that…. The reason it’s called The Gather Again Tour is we want people on top of us, and they will be.”

Now, with two weeks of rehearsals and detailed planning under their belt, Church and company get the cage match underway this Friday, September 17, at Lexington, Ky.’s Rupp Arena with 56 dates throughout the U.S. and Canada to follow. Tickets to all dates, including the grand finale at New York City’s iconic Madison Square Garden, are on sale now at EricChurch.com.

All tour dates will enforce local venue and/or city guidelines regarding COVID-19 precautions. Church will be touring with a fully vaccinated band and crew.

For more information, visit www.ericchurch.com and follow on Facebook and Twitter @ericchurch and Instagram @ericchurchmusic. Fans can also download the Eric Church Official App for exclusive offers only available on tour – including seat upgrades, contests and special merchandise – all while connecting with fellow fans from around the world!

About Eric Church
Reigning CMA Entertainer of the Year and 10-time GRAMMY nominee Eric Church has spent the past year releasing new music at a relentless pace; providing a glimpse into the results of a marathon writing session during which he spent nearly a month writing and recording a song per day – including his latest Gold-certified No. 1 single “Hell of a View” and current single “Heart On Fire” – while sequestered in rural North Carolina, and fueling speculation around his critically acclaimed, chart-topping new three-part project, Heart & Soul, available everywhere now.

Just as unique as Church’s approach to recording and releasing music is his tenacity on the road. During his most recent outing, 2019’s Double Down Tour, Church played back-to-back nights of two unique shows in each market sans opening act, giving every city’s fans six-plus hours of his iconic music. The tour also featured a massive stop at Nissan Stadium in Nashville, where he broke the venue’s concert attendance record with more than 56,000 fans in attendance and became the first artist to sell out the venue with a solo lineup. Church also took to the field at Tampa Bay’s Raymond James Stadium in February of this year to perform the National Anthem with R&B star Jazmine Sullivan ahead of Super Bowl LV and will return to the road for his 55-city The Gather Again Tour this month, visiting full-capacity arenas for an in-the-round show in addition to a headlining spot alongside George Strait and Metallica during the ATLive festival at Mercedes-Benz Stadium this November.

A seven-time ACM Award winner, four-time CMA Award winner and 10-time GRAMMY nominee, Church has amassed a passionate fanbase around the globe known as the Church Choir as well as a critically acclaimed catalog of music. His previous album, the Gold-certified Desperate Man, earned a GRAMMY nomination for Best Country Album (his third nod in the category). Previous releases include the Platinum-certified Sinners Like Me (“How ’Bout You,” “Guys Like Me”), Carolina (“Smoke a Little Smoke,” “Love Your Love the Most”) and Mr. Misunderstood (“Record Year,” “Round Here Buzz”), the Double-Platinum certified The Outsiders (“Like a Wrecking Ball,” “Talladega”) and the 3x Platinum-certified Chief (“Springsteen,” “Drink In My Hand”), as well as 29 Gold, Platinum and multi-Platinum certified singles.