ERIC CHURCH IS MOST ADDED WITH NEW SINGLE: “STICK THAT IN YOUR COUNTRY SONG” 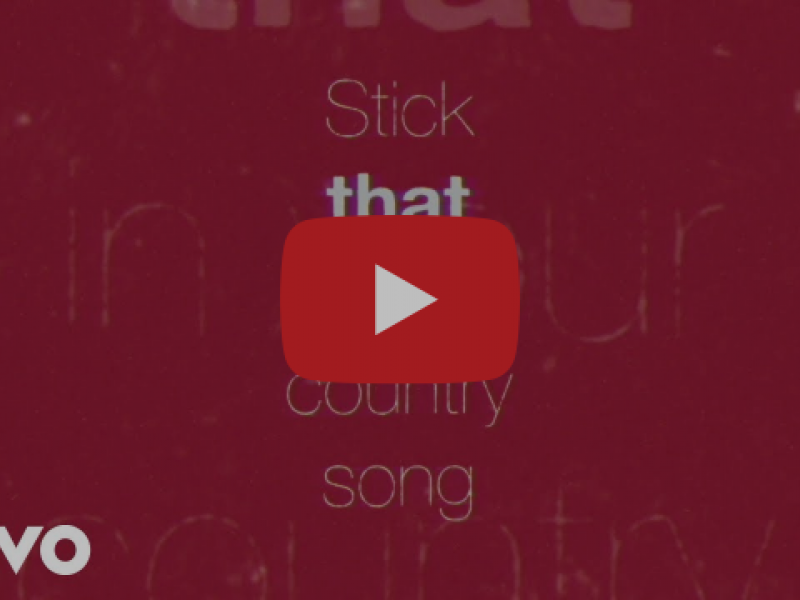 Over six albums and 15+ years in Nashville, Eric Church has never been shy about releasing defiant music that carries an important message. Offering what he describes as “the tip of the spear” for what’s to come, Church once again leads with an emphasis on truth and emotion, as “Stick That In Your Country Song” earns most-added distinction at Country radio.

“Church never plays by the rules or stands on formality, but he takes it to new levels on this defiant track that looks at an America that is broken, despite the everyday heroes doing herculean work… it’s a trenchant social commentary about the mindless tunes that radio sometimes favors over weighty material [and] the song builds over a screaming electric guitar and wailing backing vocals. Will radio be brave enough to play this essential cut?”
– Billboard

“Eric Church is not holding back in the lyrics of his new single ‘Stick That In Your Country Song’... [Church] outlines numerous real-life issues in the song that he says should be addressed more in country music, such as diversity, poverty, violence in cities, and underpaying school teachers.”
– People

“Eric Church demands substance in furious ‘Stick That In Your Country Song’… Church turns in a dynamic vocal performance throughout, ranging from a tense whisper in his early verses to a full-blooded scream in the second verse… offering up a criticism of feel-good material on country radio as his band churns out some pummeling rock & roll.”
– Rolling Stone

“For the past decade-plus, the country superstar Eric Church has carved out a niche for himself as a sort of outsider’s Nashville insider, a rebel who fills arenas while operating within the pop-country system… [With] a seething, explosive rocker… a slow-build stomper with drive and purpose… Church has come out with a new country song that challenges the ways that country songs tend to work.”
– Stereogum

“[Church] addresses a number of social issues in ‘Stick That in Your Country Song,’ a rousing and foot-stomping new tune written by Jeffrey Steele and Davis Nash. If the first single is a preview of what's to come... it sounds like he’s got a lot to get off his chest.”
– USA Today

“What makes ‘Stick That in Your Country Song’ so potent isn’t just the track, which slices and strikes, but the seething indictment of a genre that would rather sidestep inconvenient truths for field parties and sweet honeys… [Church] has thrown down a gauntlet there’s no way to ignore. On this stark, visceral song, the tension burns and holds you in place… Church doesn’t make any judgments—he doesn’t have to. [The song] demonstrates how music can foment the wrongs that go unspoken and reveal the ugly truths that have been willfully overlooked.”
– HITS

“Any time The Chief releases a new single, the rest of the field might as well pack it in… Eric brings country music back to what it does best, describing the reality of its listeners. It’s gritty, snarling and a little uncomfortable. But man, is it ever powerful. The Chief tells it like it is.”
– MusicRow

“Stick That In Your Country Song” is one of many songs Church wrote in a rural North Carolina cabin earlier this year, which he has teased throughout recent performances on ACM Presents: Our Country (“Never Break Heart”), Stagecouch (“Jenny”) and in a defiant spoken-word recording (“Through My Ray Bans”). The new music follows Church’s most recent critically acclaimed project, 2018’s Desperate Man, his sixth studio album which was named one of the year’s best by American Songwriter, Billboard, Entertainment Weekly, Los Angeles Times, NPR, Rolling Stone, Variety and Vulture, among others, also earning a GRAMMY nod for Best Country Album (his third nomination in the category).

Renowned just as much for his high-energy live performances as he is for his unapologetic records, Church will appear on the Country Music Association’s “Best of Fest” television special Monday, July 13, to relive his epic mega-medley performance during CMA Fest 2019, where he performed a 30-minute, solo acoustic set for the Nissan Stadium crowd – just weeks after setting the venue’s concert attendance record with more than 56,000 fans as part of his chart-topping Double Down Tour.

About Eric Church
The three-time Country Music Association and seven-time Academy of Country Music Award winner released his most recent critically acclaimed album, Desperate Man, atop the Billboard Country Albums chart in late 2018. The album, featuring his most recent No. 1 hit “Some Of It,” also debuted at No. 5 on the all-genre Billboard 200. Church returned to the road in 2019 for his chart-topping Double Down Tour, with back-to-back nights of two unique shows sans-opening act giving fans 6+ hours of his iconic music in each city. The tour also featured a massive stop at Nissan Stadium in Nashville, where Church broke the venue’s concert attendance record with 56,521 fans just two weeks before awing the same stadium’s audience with a 30-minute, solo acoustic CMA Fest set featuring a medley of 17 hits. “Stick That In Your Country Song,” released on June 25, is the lead single off a forthcoming project born from a sequestered session in rural North Carolina where he wrote and recorded a song per day for nearly a month.