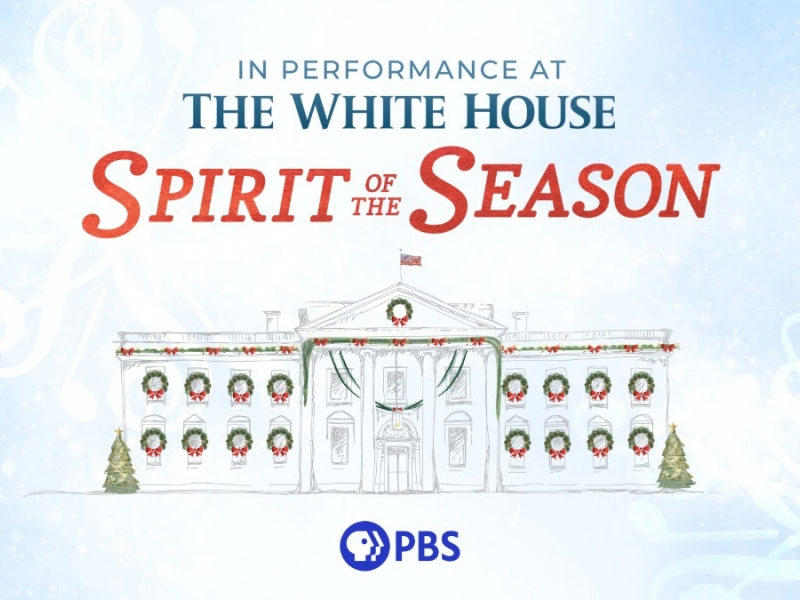 WASHINGTON, D.C. – PBS will mark the holiday season with the premiere of In Performance at the White House: Spirit of the Season. This dazzling music special celebrates the holidays and highlights the seasonal décor at the White House. Hosted by actress Jennifer Garner, the program will include performances by Andrea Bocelli, Matteo Bocelli, Virginia Bocelli, Camila Cabello, Eric Church, Jonas Brothers, Norah Jones,Pentatonix, Billy Porter, Northwell Health Nurse Choir, Voices of Service and the United States Marine Band.

The hour-long television special is produced by WETA Washington, D.C., the flagship public broadcaster in the nation’s capital, in association with Ken Ehrlich Productions, Inc., and will be recorded at the White House December 11-14, 2021. The music special is part of the Emmy Award-nominated PBS In Performance at the White House series and will premiere Tuesday, December 21 at 8 p.m. ET on PBS stations nationwide (check local listings). The program will also be broadcast at a later date via the American Forces Network to American service men and women and civilians at U.S. Department of Defense locations around the world.

“WETA is pleased to partner with the White House to welcome viewers into the nation’s most prominent home to focus on the importance of family, community and America during the holidays,” noted Sharon Percy Rockefeller, president and chief executive officer of WETA.  “We look forward to sharing more special performances recorded at the White House to capture the essence of our nation at its best.”

“We are thrilled to celebrate the holiday season with this special musical performance at the White House,” said Paula A. Kerger, PBS president and CEO. “As an important part of our mission, PBS and our member stations will continue to share the very best of theater, music and dance with audiences across the country.’’

“We are pleased to support In Performance at the White House: Spirit of the Season,” said Pat Harrison, president and CEO of the Corporation for Public Broadcasting. “Although we are still dealing with the pandemic, it is important to take this time to count our blessings through music and song and come together as a nation during this season of celebration and remembrance.”

Two performance acts in particular will celebrate service to the nation. The Northwell Health Nurse Choir is a group of frontline nurses — each from different Northwell hospitals, nursing specialties and areas of New York. They formed in 2020 and represent frontline workers and the nursing profession, with the power of music lifting their spirits and helping them forge a special bond while the COVID-19 pandemic has been especially challenging for their profession. Voices of Service is a singing quartet, part of the nonprofit Center for American Military Music Opportunities (CAMMO), and includes retired Master Sgt. Caleb Green, retired Staff Sgt. Ron Henry, Sgt. Maj. Christal Rheams and Sgt. 1st Class Jason Hanna. Voices of Service use their platform to increase awareness of what music can do for service men and women who are coping with post-traumatic stress and other invisible and visible wounds.

In Performance at the White House: Spirit of the Season is a production of WETA Washington, D.C., in association with Ken Ehrlich Productions, Inc. The executive producers are John F. Wilson for WETA and Ken Ehrlich for Ken Ehrlich Productions, Inc. The producer is Renato Basile. The director is Toré Livia. The project executive is Kate Kelly. The senior producer is Jim Corbley. The executive in charge for PBS is Douglas Chang. The In Performance at the White House series was created by WETA Washington D.C.

This PBS presentation of In Performance at the White House: Spirit of the Season was provided by Otsuka. Major funding is also provided by the Corporation for Public Broadcasting.

Watch the full program online at pbs.org/whitehouse and join the conversation on social via #WhiteHouseConcertPBS.

For images and additional up-to-date information on this and other PBS programs, visit PBS PressRoom at pbs.org/pressroom.

About Eric Church
Eric Church has spent the past year releasing new music at a relentless pace; providing a glimpse into the results of a marathon writing session during which he spent nearly a month writing and recording a song per day – including current single “Hell of a View” – while sequestered in a rural North Carolina cabin, and fueling speculation that his highly anticipated seventh studio album is on the horizon.

Just as unique as Church’s approach to recording and releasing music is his tenacity on the road. During his most recent outing, 2019’s Double Down Tour, Church played back-to-back nights of two unique shows in each market sans opening act, giving every city’s fans six-plus hours of his iconic music. The tour also featured a massive stop at Nissan Stadium in Nashville, where he broke the venue’s concert attendance record with more than 56,000 fans in attendance and became the first artist to sell out the venue with a solo lineup.

A seven-time ACM Award winner, four-time CMA Award winner, including the 2020 award for Entertainer of the Year, and 10-time GRAMMY nominee, Church has amassed a passionate fanbase around the globe known as the Church Choir as well as a critically acclaimed catalog of music. His most recent album, Desperate Man, earned a GRAMMY nomination for Best Country Album (his third nod in the category) and produced his most recent No. 1 hit, “Some Of It.” Previous releases include the Platinum-certified Sinners Like Me (“How ’Bout You,” “Guys Like Me”), Carolina (“Smoke a Little Smoke,” “Love Your Love the Most”) and Mr. Misunderstood (“Record Year,” “Round Here Buzz”), the Double-Platinum certified The Outsiders (“Like a Wrecking Ball,” “Talladega”) and the 3x Platinum-certified Chief (“Springsteen,” “Drink In My Hand”), as well as 22 Gold, Platinum and multi-Platinum certified singles.
About WETA
WETA is the leading public broadcaster in the nation’s capital, serving Virginia, Maryland and the District of Columbia with educational initiatives and with high-quality programming on television, radio and digital. WETA Washington, D.C., is the second-largest producing-station for public television in the United States, with news and public affairs programs including PBS NewsHour and Washington Week; films by Ken Burns such as Muhammad Ali and Hemingway; series and documentaries by Dr. Henry Louis Gates, Jr., including Finding Your Roots with Henry Louis Gates, Jr., and The Black Church: This Is Our Story, This Is Our Song; health content from Well Beings, a multiplatform campaign that includes original broadcast and digital content, engagement campaigns, and impactful local events, featuring the documentary Hiding in Plain Sight: Youth Mental Illness; and performance specials including The Kennedy Center Mark Twain Prize, and The Library Of Congress Gershwin Prize for Popular Song. More information on WETA and its programs and services is available at www.weta.org. Follow @WETAtvfm on Facebook and Twitter.

About PBS PBS, with more than 330 member stations, offers all Americans the opportunity to explore new ideas and new worlds through television and digital content. Each month, PBS reaches over 120 million people through television and 26 million people online, inviting them to experience the worlds of science, history, nature and public affairs; to hear diverse viewpoints; and to take front row seats to world-class drama and performances. PBS’ broad array of programs has been consistently honored by the industry’s most coveted award competitions. Teachers of children from pre-K through 12th grade turn to PBS for digital content and services that help bring classroom lessons to life. Decades of research confirms that PBS’ premier children’s media service, PBS KIDS, helps children build critical literacy, math and social-emotional skills, enabling them to find success in school and life. Delivered through member stations, PBS KIDS offers high-quality educational content on TV – including a 24/7 channel, online at pbskids.org, via an array of mobile apps and in communities across America. More information about PBS is available at www.pbs.org, one of the leading dot-org websites on the internet, or by following PBS on Twitter, Facebook or through our apps for mobile and connected devices. Specific program information and updates for press are available at pbs.org/pressroom or by following PBS Communications on Twitter.

About CPB
The Corporation for Public Broadcasting, a private, nonprofit corporation created by Congress in 1967, is the steward of the federal government’s investment in public broadcasting. It helps support the operations of more than 1,500 locally managed and operated public television and radio stations nationwide. CPB is also the largest single source of funding for research, technology and program development for public radio, television, and related online services. For more information, visit cpb.org, follow us on Twitter @CPBmedia, Facebook and LinkedIn and subscribe for email updates.

Media Contacts for In Performance at the White House: Spirit of the Season
Lameka Lucas
WETA
(703) 998-4775
llucas@weta.org