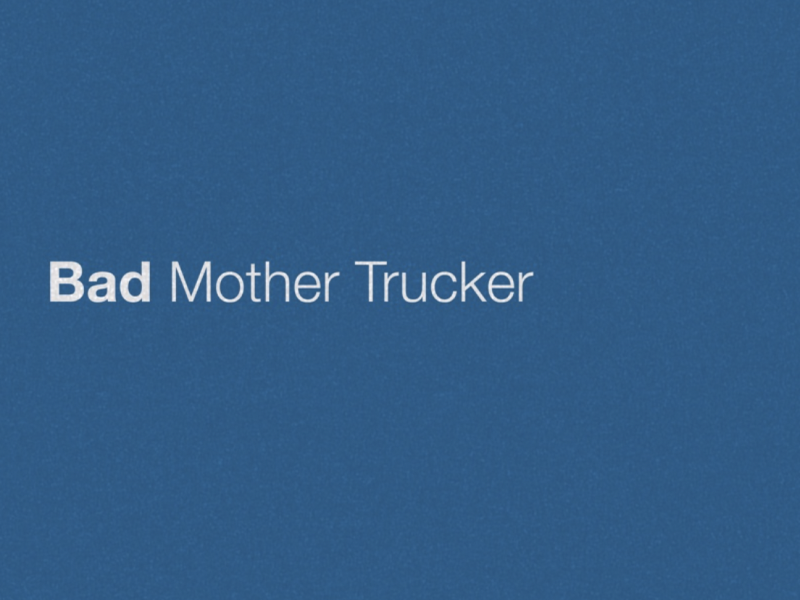 On the heels of his defiant new single “Stick That In Your Country Song,” actively climbing the charts at Country radio, current ACM Entertainer of the Year nominee Eric Church again offers a glimpse at his forthcoming project with today’s release of “Bad Mother Trucker.”

Chronicling the rebellious swagger of a female truck driver earning respect on the road, the song written by Church together with Casey Beathard, Luke Dick and Jeremy Spillman combines a contagious groove and a guitar solo begging for the day the Church Choir can once again gather at a live show with the Chief’s signature snarl and the powerhouse backing vocals of Joanna Cotten.

“She drove an ’81 Peterbilt 18-wheeler, jet black with pink mud flaps / It was a mean piece of metal with lightning in the pedal, thunder coming out the back / And them boys would chuckle when they saw her buckle herself in the captain’s seat / But nobody was laughing when she’d go to passing, smiling at them real sweet,” Church sings as the song opens and listeners meet the heroine. “She was hell on wheels where the road meets the rubber / A real gear jammer, a white line wonder / Yeah you only get one and I wouldn’t want another / ’Cause Mama was a bad mother trucker.”

The two new tracks follow heavy speculation surrounding Church’s forthcoming project, after he discussed writing and recording a song per day in a rural North Carolina cabin during his CRS “Chasing Creativity” keynote appearance earlier this year. Devoted to putting fans first, the man NPR calls “the gold standard for mainstream country” has offered them glimpses at the new songs throughout recent performances on ACM Presents: Our Country (“Never Break Heart”), Stagecouch (“Jenny”) and in a defiant spoken-word recording, “Through My Ray Bans.”

About Eric Church
The three-time Country Music Association and seven-time Academy of Country Music Award winner released his most recent critically acclaimed and Grammy nominated album, Desperate Man, atop the Billboard Country Albums chart in late 2018. The album, featuring his most recent No. 1 hit “Some Of It,” also debuted at No. 5 on the all-genre Billboard 200. Church returned to the road in 2019 for his chart-topping Double Down Tour, with back-to-back nights of two unique shows sans-opening act giving fans 6+ hours of his iconic music in each city. The tour also featured a massive stop at Nissan Stadium in Nashville, where Church broke the venue’s concert attendance record with 56,521 fans just two weeks before awing the same stadium’s audience with a 30-minute, solo acoustic CMA Fest set featuring a medley of 17 hits. “Stick That In Your Country Song,” released on June 25, is the lead single off a forthcoming project born from a sequestered session in rural North Carolina where he wrote and recorded a song per day for nearly a month.