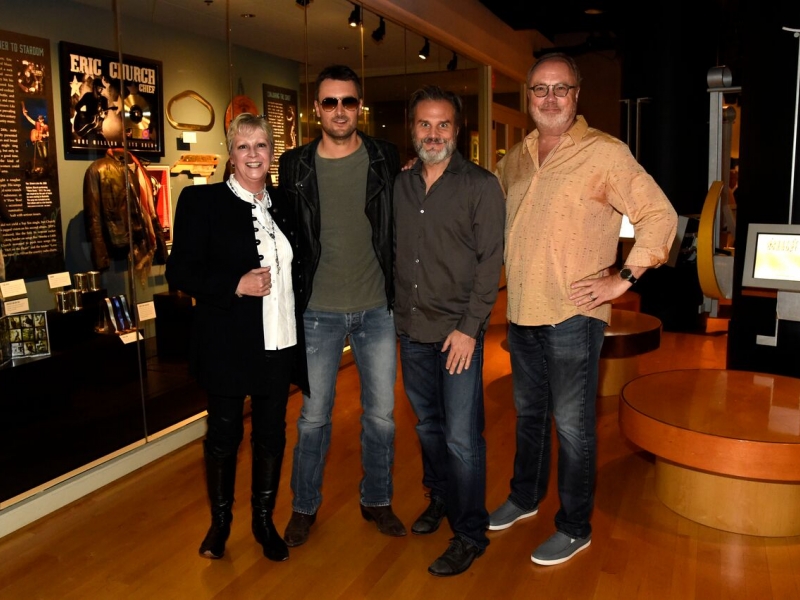 During the reception, Church said, “I revere country music. I grew up a fan in North Carolina. I remember a distinct memory when I was 23, walking by the Country Music Hall of Fame just having a moment you know, as a songwriter that had been told ‘no’ a bunch. If I had the chance, had a time machine to go back and tell that guy what would happen over the next 10-15 years (laughs)...neither one of us would believe it.  I just walked through an exhibit that had my name all over it, and here’s what I learned. It doesn’t matter how great your songs are, how great a singer and player you are...I know this now, that it’s about the people that are in this room. It’s about everybody from songwriters, it’s about management, it’s about the band and crew that give it to ‘em every night. It’s about my family, it’s about the people at our house. It’s not about me, because it’s not possible for one person to make that happen.”

The Country Music Association and four-time Academy of Country Music Award winner finished 2014 as country music’s top-selling artist, with the year’s highest debut and sales of any release in the format as the critical and commercial success The Outsiders reached Platinum status, marking more than one million albums sold. Debuting at No. 1 on both the Billboard Top 200 Albums Chart and Top Country Albums chart, “The Outsiders” garnered GRAMMY, CMA and ACM Album of the Year nominations and features his No.1 hits “Give Me Back My Hometown” and “Talladega” as well as Top 10 “Like A Wrecking Ball.” The Outsiders is the follow-up to Church’s Platinum-certified CHIEF, named the 2012 Album of the Year by both CMA and ACM, and GRAMMY-nominated for Best Country Album. The LP featured five Top 20 singles: “Homeboy” (certified Platinum for sales in excess of 1 million); the Top 10 “Like Jesus Does” and the Top 5 “Creepin’” (both certified Gold for sales in excess of 500,000); and two No. 1 hits “Drink in My Hand” (certified Platinum) and “Springsteen” (certified Double Platinum for sales in excess of 2 million singles). Church’s 2006 debut album, Sinners Like Me (2006) and his sophomore album Carolina (2009) are both RIAA Gold-certified. For more information or tickets, visitwww.EricChurch.com.

About the Country Music Hall of Fame and Museum

Accredited by the American Alliance of Museums, the Country Music Hall of Fame® and Museum is operated by the Country Music Foundation, a not-for-profit 501(c)(3) educational organization  chartered by the state of Tennessee in 1964. The museum's mission is the preservation of the history of country and related vernacular music rooted in southern culture. With the same educational mission, the foundation also operates Historic RCA Studio B, Hatch Show PrintTM CMF Records, the museum's Frist Library and Archive and CMF Press. Museum programs are made possible, in part, by the Metropolitan Nashville Arts Commission, the Tennessee Arts Commission, and under agreements with the National Endowment for the Arts.

More information about the Country Music Hall of Fame® and Museum is available at www.countrymusichalloffame.org or by calling (615) 416-2001.

# # #
Additional images from the exhibit are available upon request toebie@ebmediapr.com.