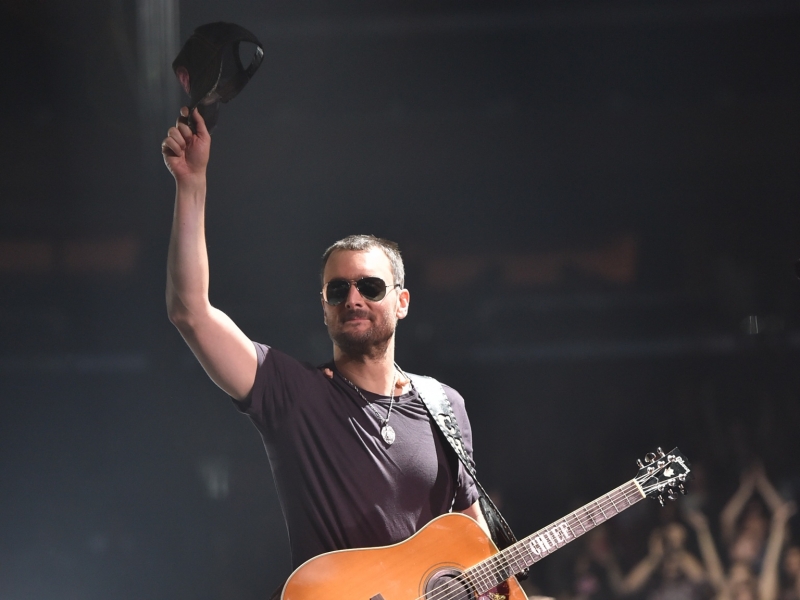 The acclaimed country rocker known for his blue-collar attitude put in extra work last week with some of his most memorable performances, partied with Church Choir members at a secret party and raised more than $20,000 for his Chief Cares charity fund.

Church capped a week of heartfelt and personal performances on Sunday night at the CMA Music Festival at LP Field where he started his set with Little Feat’s “Sailin’ Shoes” and finished the night with a surprise  performance during Keith Urban's set of their shared #1, "Raise 'Em Up." The Little Feat cover was part tribute to his favorite band and part history lesson for fans who may not know of that seminal rock ‘n’ roll group’s impact on modern country music and Church’s own sound.

“I’m a huge Lowell George fan,” Church said of Little Feat’s late guitarist. “There are two huge influences on my life, The Band and Levon Helm, and Lowell George is my favorite guitar player ever. He’s just my guy. I grew up on those records. To me, musically that’s the DNA of who I am and that’s the DNA currently of what country music should be.”

The week of memorable performances started Wednesday night when the North Carolina native performed his latest single “Like a Wrecking Ball” – a performance that will be immortalized as the music video, premiering on CMT this Wednesday – from 2014’s smash success The Outsiders at the CMT Music Awards before walking across Lower Broadway to Ryman Auditorium for Marty Stuart’s Late Night Jam.

There he played The Band’s “The Weight” for fans and caught everyone by surprise by offering an off-the-cuff cover of Little Big Town’s “Girl Crush” with that quartet’s Karen Fairchild and Phillip Sweet along with special guests Chris and Morgane Stapleton.

“It was when (Stuart) welcomed Eric Church onstage a little after 1:00 a.m. that the evening truly heated up, reenergizing a crowd that had taken their seats hours earlier,” Rolling Stone wrote of the night, noting of “Girl Crush”: “Here was country's preeminent alpha male singing the year's most sultry torch song - and the fans hearty enough to still be awake ate it up. Fairchild stepped in to finish the song, balancing Church's growl with her own purr.”

Then on Friday night, Church pulled another surprise out of his ball cap, opening his own The Outsiders World Tour stop for a record crowd at The Amphitheater at The Wharf in Orange Beach, Alabama. He played an acoustic set for 45 minutes, then brought out his band for his regular show. He then joined Kenny Chesney’s The Big Revival Tour at the Georgia Dome on Saturday night in Atlanta before returning to Nashville with the Atlanta Journal Constitution raving, “Between his clenched fists and grimaces, it was obvious that Church feels every note he sings and plays,” before acknowledging, “Church offers a refreshing blast of originality in a country music market that can get mired in sterility.”

Church also raised money for his own charity, opening “The Outsider’s Joint” pop-up store in East Nashville during the festival. Shoppers had a chance to buy rare and unique items, helping Church raise more than $20,000 for the Chief Cares 501c3 non-profit charity run by Church and wife Katherine. The charity serves more than 2.5 million people around the globe with charitable giving. For more information on Chief Cares Fund, visit http://www.ericchurch.com/chiefcares.

Church will resume The Outsiders World Tour, which has already set five venue attendance records, on June 20 at the Black Diamond Harley-Davidson in Marion, Illinois. For a full list of tour dates, visit www.EricChurch.com.