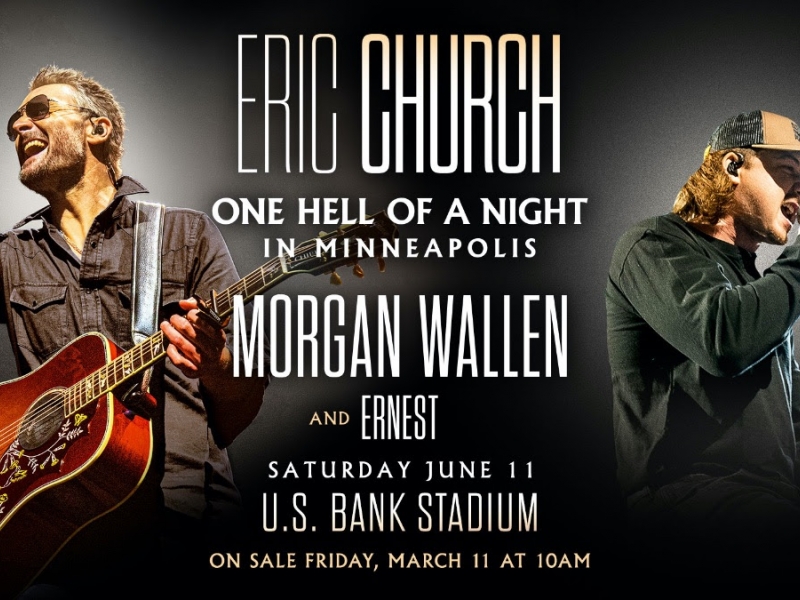 MINNEAPOLIS, Minn. – After first breaking the news to his Church Choir faithful last night, CMA Entertainer of the Year/superstar Eric Church now officially announces his second headlining stadium show this summer, with “One Hell of a Night in Minneapolis” set for Saturday, June 11 at U.S. Bank Stadium. The supersized show will see the 10-time GRAMMY nominee joined by fellow songwriting craftsmen Morgan Wallen and ERNEST.

Today’s announcement adds to an already remarkable year for the man celebrated by Stereogum as “one of the biggest touring musicians on earth,” as rock-infused anthem “Heart On Fire” climbs the Top 10 at country radio and The Gather Again Tour holds the top spot on Pollstar’s Live75 chart for back-to-back weeks, with Variety proclaiming: “For a guy whose concerts time out at three hours a night, the pandemic’s break was but a way to rest up and blast off, ferociously.”

The update follows Church’s recent news that he will also headline a Milwaukee stadium show over Memorial Day weekend, with Brothers Osborne and Parker McCollum joining him at American Family Field on Saturday, May 28.

“Church is never predictable — aside from the fact that he consistently stages one of the most explosive (and longest) sets in country music,” the Milwaukee Journal-Sentinel remarked upon that show’s announcement. “For the second stadium-headlining show of his life, expect Church to give his fans his all.”

Tickets to the U.S. Bank Stadium show go on sale to the general public Friday, March 11 at 10 a.m. CT via EricChurch.com. Members of the Church Choir will have early access to tickets beginning Friday, March 4. Tickets to the American Family Field show and remaining dates of The Gather Again Tour are on sale now.

Church Choir members will also have the exclusive opportunity to gather together for a pre-show tailgate at U.S. Bank Stadium by adding the “Church Choir Pre-Show Tailgate” during the Church Choir pre-sale to access to the pre-show tailgate with food trucks, two drink tickets, a special gift, tailgate games, giveaways and more. Also at the stadium and open to the general public will be a pop-up store with These Boots by Lucchese (Church’s exclusive signature boot line).

For more information, visit www.ericchurch.com and follow on Facebook and Twitter @ericchurch and Instagram @ericchurchmusic. Fans can also download the Eric Church Official App for exclusive offers only available on tour – including seat upgrades, contests and special merchandise – all while connecting with fellow fans from around the world.

About Eric Church
Eric Church spent the past year releasing new music at a relentless pace; sharing the results of a marathon session during which he spent nearly a month writing and recording a song per day while sequestered in rural North Carolina – including his latest Gold-certified No. 1 “Hell of a View” and current Top 10-and-climbing single “Heart On Fire.” The resulting critically acclaimed and chart-topping three-part project, Heart & Soul, is available everywhere now.

Just as unique as Church’s approach to recording and releasing music is his tenacity on the road. During 2019’s Double Down Tour, Church played back-to-back nights of two unique shows in each market sans opening act, giving every city’s fans six-plus hours of his iconic music. The tour also featured a massive stop at Nissan Stadium in Nashville, where he broke the venue’s concert attendance record with more than 56,000 fans in attendance and became the first artist to sell out the venue with a solo lineup. Church also took to the field at Tampa Bay’s Raymond James Stadium in 2021 to perform the National Anthem with R&B star Jazmine Sullivan ahead of Super Bowl LV and has now returned to the road for his 55-city The Gather Again Tour, visiting full-capacity arenas for an in-the-round show in addition to a recent headlining spot alongside George Strait and Metallica during the ATLive festival at Mercedes-Benz Stadium. He will also headline a one-of-a-kind stadium show at Milwaukee’s American Family Field in May.

About Morgan Wallen
The New Yorker dubbed Morgan Wallen “the most wanted man in country” in part due to the CMA Award Winner’s 8 billion on-demand streams, multi-Platinum certifications and four consecutive chart-toppers, and in part due to his flyover appeal: “Bruce Springsteen meets Larry the Cable Guy.” The critically-acclaimed follow-up to his Double Platinum breakout If I Know Me, Dangerous: The Double Album (Big Loud/Republic Records), topped 2021’s all-genre Billboard 200 year-end albums chart with 3.2 million units sold and sparked an in-demand 54-date The Dangerous Tour underway now, with the “Up Down” (2017), “Whiskey Glasses” (2018), “Chasin’ You” (2019), “More Than My Hometown” (2020), “7 Summers” (2020, named one of Time Magazine’s Best Songs of the Year) and “Sand In My Boots” (recently No. 1 at Country radio) singer playing two nights at Madison Square Garden and three nights at Bridgestone Arena. Working outside the traditional Nashville mainframe with producer Joey Moi, Hits Magazine notes, “Wallen continually colors outside the lines,” adding, in turn “he’s connected to his fans in ways unprecedented for a country star.” With over 705,000 tickets sold ahead of the tour’s launch, $3 from every ticket sold benefits the songwriter from East Tennessee’s More Than My Hometown Foundation. For more information, visit MorganWallen.com.


About ERNEST
Nashville’s most unpredictable hit maker ERNEST is “The Charmer” (MusicRow), a triple threat talent and one of Music City’s on the rise artist/writers that’s changing the status quo. As a chart-topping songwriter, he fuses influences ranging from Eminem to George Jones, creating a twist-heavy verse style that’s become his signature, proving its mettle and earning him five No. 1 hits to date. The eccentric free spirit launched his debut single to country radio “Flower Shops” feat. Morgan Wallen in January to 88 first week stations, the No. 1 most added single of the week, and is Top 30 after just five weeks. His debut full-length album of the same name - FLOWER SHOPS (THE ALBUM) – will release on March 11, showing off the more classically country side of his craft. ERNEST appeared alongside ’90s country legend David Lee Murphy and labelmate Ben Burgess on HIXTAPE: Vol. 2 track “Red Dirt Clouds” last fall, and his podcast Just Being ERNEST is in its third season, hosting guests like Keith Urban, Diplo, Jason Aldean, Bobby Bones and Craig Wiseman, with many more to come.