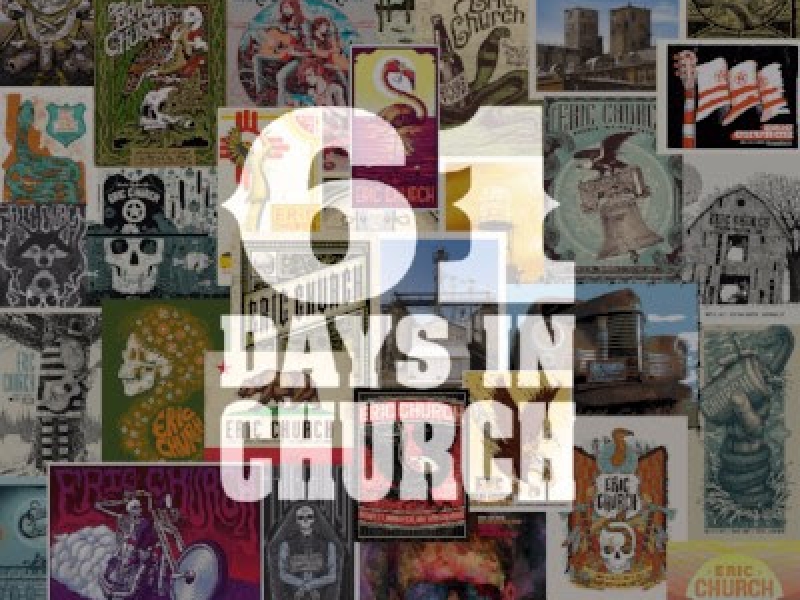 From the tour that brought fans more than 200 hours of music across 61 dates in the form of double-set, 3+ hour shows sans-opener, Eric Church releases the next 30 live recordings of his 61 Days in Church. Having delivered the first 30 Holdin’ My Own Tour live recordings on September 1, Church plans to continue subsequent releases throughout the year in chronological order of the tour to complete a total of more than 100 tracks.

The man Rolling Stone Magazine deems “the most consistently engaging live arena act in country music," Church's 61 Days in Church includes a variety of catalogue cuts and singles as well as cover songs inspired by each tour stop. The wide assortment of tracks in the collection are a reflection of Church’s version of, as he told Billboard, “calling an audible,” and making a decision on fresh songs for each stop upon arrival.

The 61 Days in Church recordings will initially be released only on the Apple Music platform for a two-week period before being made available on all streaming services.

Unique, individual tour posters from each tour stop serve as the artwork for each of the songs’ releases. Physical release of the music will be released soon to meet fans’ demand for the full collection.

The 30 songs released today include the following tracks performed at different cities:

Over When It's Over (featuring Joanna Cotten)

Ain't Killed Me Yet

The Ballad of Curtis Loew

Where She Told Me To Go

Faster Than My Angels Can Fly

The World Needs A Drink

Memphis Medley (How I Got To Memphis/Walking in Memphis)

Pledge Allegiance to the Hag

Up on Cripple Creek

The Night They Drove Old Dixie Down

Hell on the Heart

The Shape I'm In

Drink In My Hand

It Makes No Difference

Can't Take It With You

Church’s Holdin’ My Own Tour sold 930,000 tickets at the end of its run notching his as the top music tour in the first quarter of 2017 (Pollstar), but as Dave Brooks (Billboard Magazine) noted, “Fans will remember that tour by another metric: the marathon three-and- a-half hours Church played nightly as he crisscrossed the United States and Canada.”

Information on 61 Days in Church can be found here: ericchurch.com/sixtyonedaysinchurch

Fans can catch a different show from Church as he continues touring throughout 2017. Find tour dates here: https://www.ericchurch.com/events