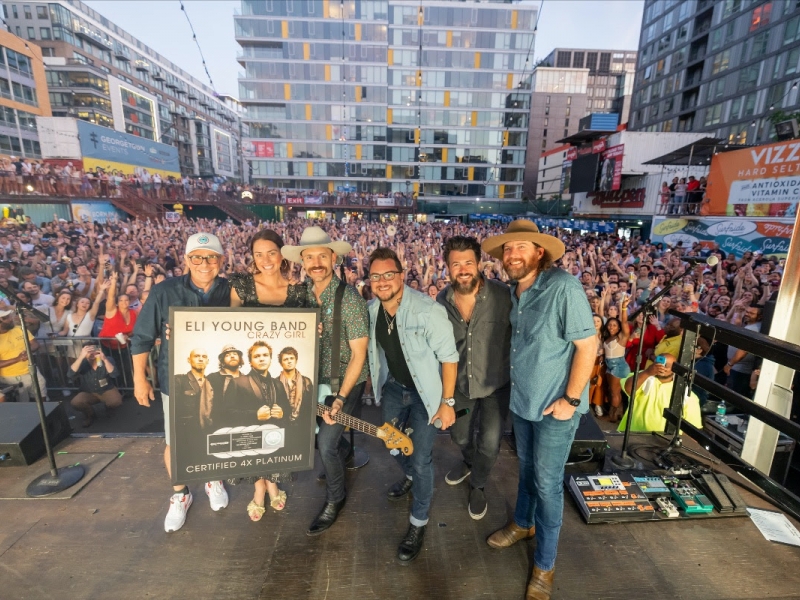 Washington, D.C. – Eli Young Band celebrated their Love Talking album release with a sold-out weekend on their Love Talking Tour, wrapping with another milestone for one of their biggest hits. RIAA’s Liz Kennedy and Big Machine Label Group’s Jimmy Harnen, who led “Crazy Girl” to the No. 1 spot at Country radio in 2011, surprised EYB with 4x Platinum certification during their show in Washington, D.C. on Friday night (June 3). As their highest award yet, “Crazy Girl” has surpassed more than four million sales and streaming units in the U.S. and was previously named Billboard's No. 1 Country Song of the Year and won the ACM Award for Song of the Year. Watch the surprise moment HERE.

“‘Crazy Girl’ has been a defining song for us, and it’s really special to see how much fans love it too,” says Mike Eli. “We’re grateful for those singing along from the crowd and those who play our music on repeat because you make moments like these possible! And thanks to the RIAA for celebrating this certification with us.”

With a dynamic career spanning two decades, fans have been treated to the hits, old favorites and new songs from EYB’s sixth studio album throughout the tour thus far. Love Talking is available everywhere now via The Valory Music Co. Listen HERE. Praise has already begun:

“Mike Eli has one of country music’s most distinct voices and after 20 years of playing with the same guys, the band knows how to own any story country music has to tell and stamp it with their signature harmonious country, rock, Texas blend.” – CMT

“the fruits of the band’s recent creative explosion” – American Songwriter

“the echo gives the sound some extra juice, and the band is as proficient as ever” – MusicRow

“the same band that has long given us songs like 'Drunk Last Night,' 'Crazy Girl' and 'Even If It Breaks Your Heart' brings the feel-good again... and as a band, they have never felt better.” – Taste of Country

The trailblazing group has come a long way since their formation in 2000 at the University of North Texas, with the multi-Platinum hitmakers’ career thus far also producing chart-topping singles; 2x Platinum “Even If It Breaks Your Heart” plus Platinum “Love Ain’t” and “Drunk Last Night.” Additionally, EYB has earned multiple award nominations, including GRAMMY, CMA, CMT, ACA and Teen Choice Awards nods.