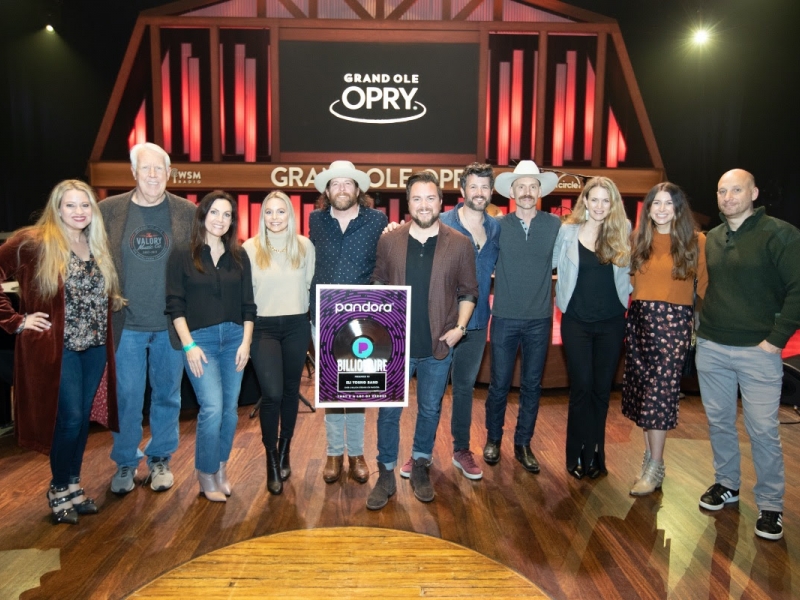 NASHVILLE, Tenn. – Multi-Platinum hitmakers Eli Young Band were surprised with a Pandora Billionaire Plaque following their Grand Ole Opry performance last night, Feb. 22. The moment commemorates over 2 billion streams on the platform, and the band has been added to Pandora’s Country Billionaires Radio in celebration of the honor.

“Sometimes these moments sneak up on you and refill the gas tank,” reflected lead singer Mike Eli in response to the surprise presentation. “We love to play music and when something like this comes along and reminds you that people are listening, it just feels so good. The first and last time someone will call us billionaires!”

Last week, the musical band of brothers delivered new single “Love Talking” to Country radio, earning early praise from American Songwriter for its “silky smooth” delivery showcasing “the fruits of the band’s recent creative explosion.” All Access concurred, “In this two minute and 50 second smash, lead singer Mike Eli’s voice embraces listeners like a warm hug,” with MusicRow remarking that “the echo gives the sound some extra juice, and the band is as proficient as ever.” Billboard also named the song among the best of the week upon its release, noting that “this ultra-romantic new release from the group swirls with an irresistible melody and propulsive rhythm.”

“Love Talking” is the lead single off the band’s forthcoming sixth studio album, planned for release later this year via The Valory Music Co.

Fans will have a chance to see the new single performed live, along with the band’s multi-decade catalog of chart-topping hits, as EYB returns to the road for their 51-city Love Talking Tour. Tickets are available at EliYoungBand.com.

For more information and to see all upcoming tour dates, visit www.eliyoungband.com and follow on social media @EliYoungBand.

About Eli Young Band
The musical band of brothers – Mike Eli, James Young, Jon Jones and Chris Thompson – play their own instruments, write their own songs and cling fast to their Texas roots. The trailblazing group has come a long way since their formation in 2000 at the University of North Texas, with the multi-Platinum hitmakers’ dynamic career thus far producing four chart-topping singles; 3x Platinum “Crazy Girl,” 2x Platinum “Even If It Breaks Your Heart” and Platinum “Love Ain’t” and “Drunk Last Night.” “Crazy Girl” also landed as Billboard's No. 1 Country Song of the Year and won the ACM Award for Song of the Year, with EYB also earning multiple GRAMMY, CMA, CMT, ACA and Teen Choice Award nominations. They have performed on national television shows such as TODAY, Conan, Late Show with David Letterman, The Tonight Show with Jay Leno, Late Night with Jimmy Fallon, Jimmy Kimmel Live! and FOX & Friends. While selling out venues from coast-to-coast as strong headliners, EYB has also shared the stage with Kenny Chesney, Rascal Flatts, Tim McGraw, Jason Aldean, Toby Keith, Chris Young, Darius Rucker and Dave Matthews Band. EYB offers the first glimpse at a forthcoming project later this year via The Valory Music Co. with lead single “Love Talking” and a headline tour of the same name. For more information and to see all upcoming tour dates, visit eliyoungband.comand follow on social media @EliYoungBand.

About Pandora
Pandora, a subsidiary of SiriusXM, is the largest ad-supported audio entertainment streaming service in the U.S. Pandora provides consumers a uniquely-personalized music and podcast listening experience with its proprietary Music Genome Project® and Podcast Genome Project® technology. Pandora is also the leading digital audio advertising platform in the U.S. Through its own Pandora service, its AdsWizz platform and third party services, such as SoundCloud, the Company connects brands to the largest ad-supported streaming audio marketplace in the country. Pandora is available through its mobile app, the web and integrations with more than 2,000 connected products.