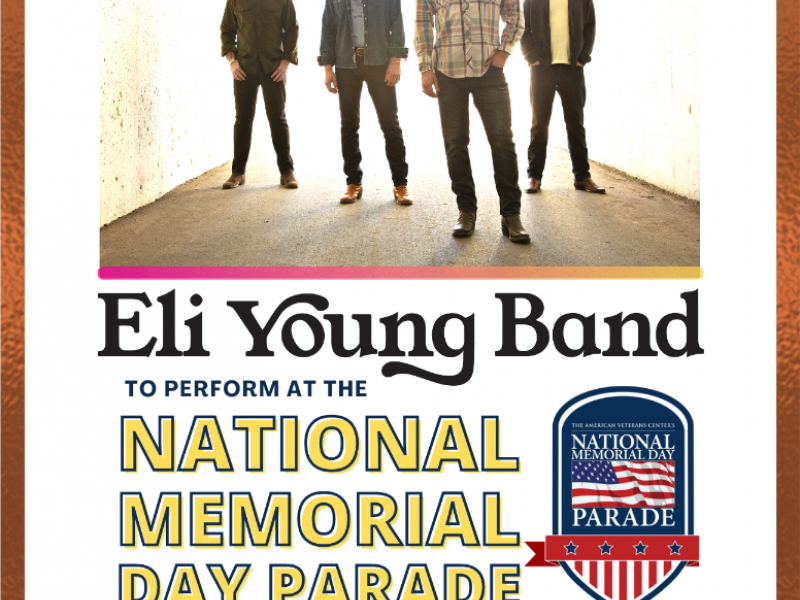 WASHINGTON, D.C. — Multi-Platinum hitmakers Eli Young Band will join the 2022 National Memorial Day Parade as an American tradition returns to Washington, D.C. for the first time since prior to the pandemic. Musical band of brothers Mike Eli, James Young, Jon Jones and Chris Thompson will perform “Love Ain’t” on the broadcast and those watching at 7th and Constitution Ave. will also be treated to their latest single “Love Talking” at 1 p.m. ET. Watch the live stream via YouTube HERE.
The American Veterans Center (AVC) re-introduced the tradition of a Memorial Day parade along Constitution Avenue in 2005, decades after it had faded away during the Second World War. It has since grown into the largest Memorial Day commemoration in the country, sharing the sacrifices of generations past and present, in front of hundreds of thousands of spectators along the National Mall.

The National Memorial Day Parade will be nationally syndicated to over 100 million households on ABC, CBS, NBC, FOX and CW stations, airing throughout the month of June. In addition, it will be broadcast to U.S. troops serving around the world and on Navy ships at sea on American Forces Network. For more information, visit NationalMemorialDayParade.com.

EYB will release their full-length album Love Talking (The Valory Music Co.) later in the week and continue a tour of the same name that brings them back to D.C. for a release day concert on Friday, June 3. The trailblazing group has come a long way since their formation in 2000 at the University of North Texas, with a dynamic career thus far producing four chart-topping singles; 3x Platinum “Crazy Girl” and 2x Platinum “Even If It Breaks Your Heart” plus Platinum “Love Ain’t” and “Drunk Last Night.”

For more information and tickets to all upcoming tour dates, visit www.eliyoungband.com and follow on social media @EliYoungBand.