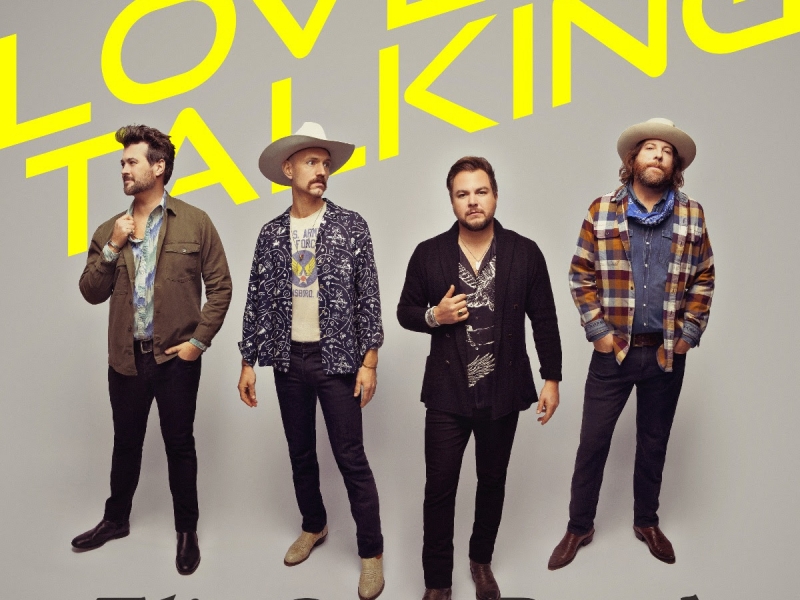 Title Track Continues to Impress at Country Radio, Across Streaming Platforms Ahead of Sold-Out Weekend of Shows on the Love Talking Tour

As CMT declares, “Mike Eli has one of country music’s most distinct voices and after 20 years of playing with the same guys, the band knows how to own any story country music has to tell and stamp it with their signature harmonious country, rock, Texas blend.” That signature stamp is on full display throughout the album, with Eli serving as a cowriter on seven of the nine songs.

“I found such a creative haven in songwriting over the past couple years of uncertainty, so we had more songs to pick from for this album than ever before,” reflects Eli. “When it came time for us to really listen through and narrow it down, we all collectively realized that the songs raising their hands the most were the positive, optimistic ones. That big, uplifting energy is what we needed as a band in that moment – and we understood that our fans were probably needing it, too, so that’s the vibe we hope this album portrays to the world.”

“Love Talking” (Mike Eli, Eric Arjes, Jeffrey East), the title track album opener, is praised by Billboard as an “ultra-romantic” song that “swirls with an irresistible melody and propulsive rhythm.” People also notes that the current radio single follows “the recipe that has thus far resulted in widespread success for the band of brothers” yet still “keep[s] the band fresh.”

The album continues with two songs that gave fans a sneak peek at the new music in recent months. “Lucky For Me” (Mike Eli, Jimmy Robbins, Laura Veltz) showcases EYB’s sound Rolling Stone praises as “backed by force-of-nature passion” over a driving pulse of rapid-fire adoration for an incomparable woman while “Break Up In A Bar” (Ashley Gorley, Ben Johnson, Hunter Phelps) offers a three-and-a-half-minute positive twist on ending a relationship via one of the album’s only outside cuts.

Platinum-certified No. 1 single “Love Ain’t” (Ross Copperman, Ashley Gorley, Shane McAnally) serves as the other outside cut. The sixth most-played song of 2020 on the Mediabase chart was also recently performed by the band during the National Memorial Day Parade in Washington, D.C., airing nationally to over 100 million households on ABC, CBS, NBC, FOX and CW stations throughout the month of June and broadcasting to U.S. troops on the American Forces Network.

The latter half of the album brings what the band cites as a sonic departure on “Chances Are” (Mike Eli, Eric Arjes, Jordan Minton) as “Live With It” (Mike Eli, Josh Osborne, Daniel Ross) offers a fresh way to describe a universal moment in new relationships. Eli calls “Tell Me It Is” (Mike Eli, Jon Nite, Jimmy Robbins” his most personal on the record, written during the height of the pandemic as he found himself turning to his wife for assurance that all would be okay. Meanwhile, “A Good Thing” (Mike Eli, Eric Arjes, Jeffrey East), meanwhile, has a positive energy reflecting its status as one of the last songs he wrote before things truly shut down in early 2020.

Rounding out the project is an acoustic version of the current single, “Love Talking,” offering a stripped-back take on the song celebrated by American Songwriter as “silky-smooth” to bring the project full circle.

As their Love Talking Tour rolls through the weekend with sold-out shows last night in Dewey Beach, Del. and tonight in Washington, D.C., EYB fans clearly have a lot to celebrate.

About Eli Young Band
The musical band of brothers – Mike Eli, James Young, Jon Jones and Chris Thompson – play their own instruments, write their own songs and cling fast to their Texas roots. The trailblazing group has come a long way since their formation in 2000 at the University of North Texas, with the multi-Platinum hitmakers’ dynamic career thus far producing four chart-topping singles; 3x Platinum “Crazy Girl,” 2x Platinum “Even If It Breaks Your Heart” and Platinum “Love Ain’t” and “Drunk Last Night.” “Crazy Girl” also landed as Billboard's No. 1 Country Song of the Year and won the ACM Award for Song of the Year, with EYB also earning multiple award nominations, including from the GRAMMY, CMA, CMT, ACA and Teen Choice Awards. They have performed on national television shows such as “TODAY,” “Conan,” “Late Show with David Letterman,” “The Tonight Show with Jay Leno,” “Late Night with Jimmy Fallon,” “Jimmy Kimmel Live!” and “FOX & Friends.” While selling out venues from coast-to-coast as strong headliners, EYB has also shared the stage with Kenny Chesney, Rascal Flatts, Tim McGraw, Jason Aldean, Toby Keith, Chris Young, Darius Rucker and Dave Matthews Band.