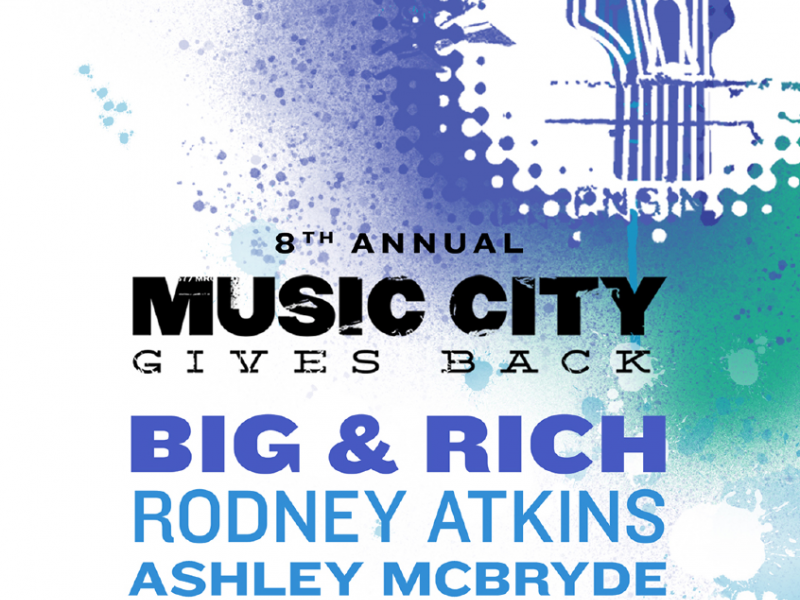 Joining previously announced headliners Big & Rich at the eighth annual “Music City Gives Back” concert hosted by Rodney Atkins are celebrated newcomers Drew Baldridge, Travis Denning and Ashley McBryde. The star-studded event will be held at Ascend Park on Monday, June 4 as an unofficial kickoff to the week of country music taking over Nashville during CMA Fest 2018.

“I’ve been watching all three of these artists really take off,” said Atkins, “so I couldn’t be more excited about having them help us put on a great show to give back to the community.”

The free and open to the public concert is presented by Ally Bank, Carl Black Chevrolet and Wrangler® and will feature autograph signings by select artists in the sponsor activation area from 12:00 p.m. to 4:00 p.m with performances beginning at 5:00 p.m.

The entire show will be streamed on WranglerNetwork.com, with radio coverage on TuneIn’s "Country Roads" station.

About Rodney Atkins
Rodney Atkins is an award-winning country music singer/songwriter whose six chart-topping hits include “Take A Back Road,” “It’s America,” “Cleaning This Gun (Come On In Boy),” “These Are My People,” “Watching You” and “If You’re Going Through Hell (Before the Devil Even Knows).” Having recently surpassed 13 million units sold during his notable career, Atkins also landed six songs on Country Aircheck’s “Top 100 Songs of Our Decade,” including the No. 1 most-played song with his Platinum-certified hit, “Watching You.” He recently released “Caught Up In The Country” to country radio, with a forthcoming studio album expected this fall. For more information and the latest updates, visit www.RodneyAtkins.com or follow online @RodneyAtkins.

About Big & Rich
They are America's Technicolor cowboys, brothers-in-arms in service to the creed that great music has no boundaries. Individually, John and Big Kenny are first-rate musicians, songwriters, producers, entertainers—and now the creative force behind their own label imprint, Big & Rich Records. Together, they are one of the most truly original musical forces ever unleashed on a welcoming world. Big & Rich have made a career of being relatable and musically relevant since exploding into the public consciousness in 2003 as the rarest of breeds—true country music game changers. With 2004’s triple-platinum Horse of a Different Color, they were able to tap into the best strands of a wide spectrum of popular music, filter them through their pens and voices and produce a sound that is instantly recognizable, if not classifiable.

About Drew Baldridge
Ever since Drew Baldridge heard his first Alabama track at age five back in Patoka, Illinois, this rangy young man’s roots have drawn from the sound and feeling of authentic, old-school country. So has his life, from working on his family farm to bonfire parties with friends on Saturday night and savoring family dinners after church every Sunday. All of those organic influences fed into his musical sound. In 2016, the Cold River Records recording artist successfully launched his debut album, Dirt On Us, landing at No. 11 on the Billboard Country album chart. Two singles hit radio from his debut, with his hit single, “Rebound,” garnering over 20 million Spotify streams; creating a solid fanbase to support his 200 plus performances across the country and landing him a spot on the inaugural “Highway Finds” tour presented by SiriusXM and Live Nation. A lifelong dream was also fulfilled in 2016, as he made his debut at the hallowed Grand Ole Opry stage and in 2017 he performed internationally at the 10th Annual CMC Rocks Festival in Queensland, Australia. The rising country star is now working on his sophomore album due out later in 2018. This album promises more of his authentic country lyrics with a deeper attention to the rhythm and flow of instrumentation. For more information visitwww.DrewBaldridgemusic.com.

About Travis Denning
A native of Warner Robins, Georgia, Mercury Nashville’s Travis Denning vividly remembers the moment he realized he wanted to pursue music for a living. He was seven years old sitting in his Dad’s truck and heard AC/DC for the first time. From then on, he was hooked and devoured all types of music from country, pop, rock and heavy metal. Travis started playing local bars at the age of 16 and built a solid following from his distinctive songs and raucous guitar licks. He moved to Nashville in 2014 and within a year signed a publishing deal with Jeremy Stover’s RED Creative Group. After securing outside cuts by Jason Aldean, Justin Moore, Michael Ray and Chase Rice he caught the attention of Universal Music Group where he eventually signed a record deal in 2017. Travis just released his debut single “David Ashley Parker From Powder Springs,” an upbeat coming-of-age song that paints a picture of a young man reminiscing on his carefree college memories. The singer/songwriter recently opened shows for Lanco, Chase Rice, Justin Moore and Alan Jackson. When Travis is not touring, he is in the studio working on his debut album.

About Ashley McBryde
Lauded by The New York Times as “an alluringly flexible singer, fluent in classic country, blues and Southern rock, with a voice that moves easily from tender to tough,” Ashley McBryde caught the attention of some of Nashville’s most raucous entertainers, landing her dates opening for Eric Church, Chris Stapleton, and, most recently, Miranda Lambert and Luke Combs. The Washington Post raves, "McBryde's blue-collar storytelling and straightforward singing set her apart," including a set during her debut on the Grand Ole Opry stage, notably sharing "Girl Goin' Nowhere," the seminal title track from her March 30, 2018 Jay Joyce-produced LP for Atlantic Records/Warner Nashville. Girl Going Nowherewas the biggest debut by a solo country artist this year and earned the Arkansas native critical acclaim from The New York Times, The Washington Post, Rolling Stone, Varietyand more. McBryde’s current single, “A Little Dive Bar in Dahlonega,” is in the Top 30 at Country radio and has already notched the No. 1 slot on SiriusXM's The Highway Top 30. Learn more about McBryde at AshleyMcBryde.com or follow her on Facebook at facebook.com/AshleyMcBryde, Instagram @ashleymcbryde and Twitter at @AshleyMcBryde.

About Wrangler
Wrangler has been an icon in authentic American style around the world for more than 70 years. With a rich legacy rooted in the American west, Wrangler commits to offering unmatched quality and timeless design. Its collections for men, women and children look and feel great, inspiring those who wear them to be strong and ready for life, every day. Wrangler is available in retail stores worldwide, including brand flagship stores in Denver and Dallas, department stores, mass-market retailers, specialty shops, western outfitters and online. A VF Corporation (NYSE: VFC) brand, Wrangler is backed by one of the world's largest apparel, footwear and accessories companies with socially and environmentally responsible operations spanning numerous geographies. For more information, visit Wrangler.com.