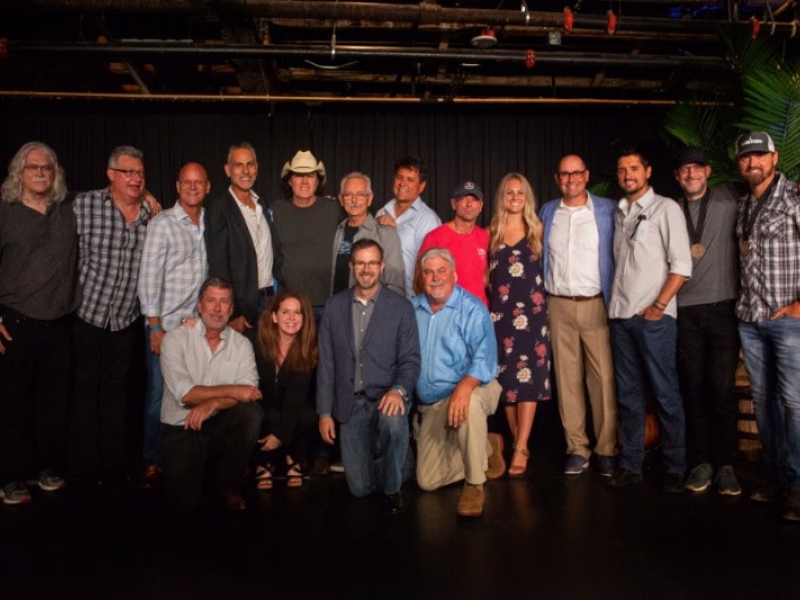 “First, I wanna thank Chris and Jimmy. We knew the day we wrote it, this was a hit even if nobody played it,” said Murphy, the man known for “Party Crowd” and “Dust on the Bottle,” to several hundred in attendance. He continued, singling out Reviver Records’ tenacity. “They were tough as can be, and we had a long haul. They’ve worked really hard on this record. We knew it was going to be a fight, but every regional got in there and gave it their all. We said you can run, but you can’t outrun us.”

Later Chesney beamed as he took the mic. “This all started three, four years ago, because David Lee would send me all these songs--demos that sounded like records--and he was singing so great. I remember thinking, ‘I’d love to hear that on the radio.’ It seemed to me that there were a lotta people who aren’t being sung to, and David Lee could be one of those people who could do that.”

Indeed, he could. “Everything’s Gonna Be Alright” has been a summer staple, as well as a fixture on Chesney’s 19 Trip Around the Sun Tour stadium shows. The impact wasn’t lost on the 8-time Entertainer of the Year, who said, “To stand up there in front of 50,000 people every Saturday night, and see a song truly move people, to really feel it is something. This song made me believe in that all over again, because to experience that is really, really beautiful.”

Whether it was BMI’s Leslie Roberts telling the assembled crowd how the lyric and the melody “and the sound of David Lee and Kenny singing, they take you back to high school, listening to two of your best friends sing and you don’t have a care in the world,” to Sony/ATV’s Troy Tomlinson confessing he asked Kenny what he was thinking when he called to say he was considering making what became No Zip Codes, and being told, “because it’s the right f’ing thing to do,” the mood was joyous and light.

With backdrop-sized pictures of Chesney and Murphy throughout ACME, the vibe was long on friendship and the connection that tethers songwriters and artists to songs. Blue Chair Bay Rum even created a cocktail just for the event – an Everything’s Gonna Be Alright Mojito—containing high proof white rum, mint, lime and a bit of sugar.

As co-writer Yeary said, “I love being a songwriter. I love to feel, so you can feel it…. If you feel, we connect. If we connect, we form a bond. If we form a bond, you’ll listen to me. And that gives us the opportunity to say things like ‘everything’s gonna be alright.’”

For an indie label, a GRAMMY-nominated songwriter who’s written seminal hits for Jason Aldean, Blake Shelton, Thompson Square, Jake Owen and Chesney, “Everything’s Gonna Be Alright” is just the beginning. They’ve got No Zip Code, a brand-new single in “I Won’t Be Sorry” and a whole lot more great music to go.