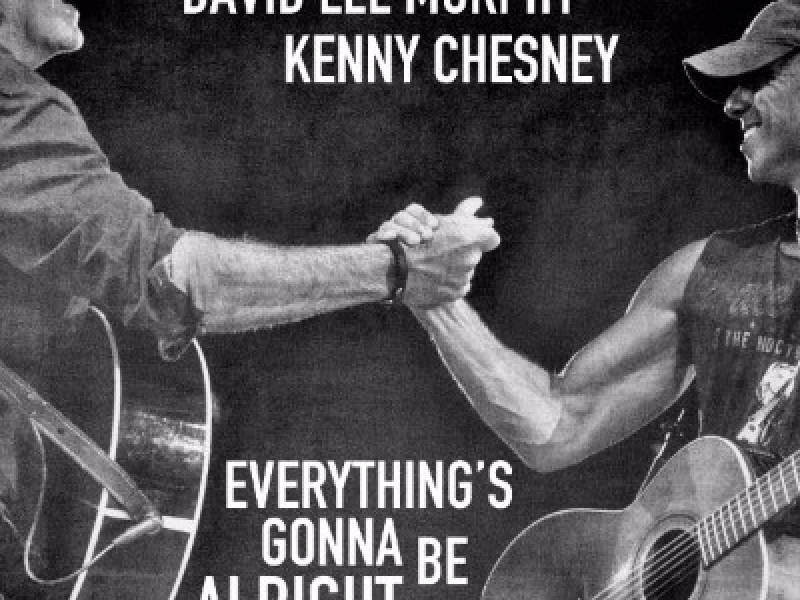 When times are tough, a good ole boy'll figure out how to stay sane – and then write a song about it. But for David Lee Murphy, he took things a step further when he wrote “Everything’s Gonna To Be Alright.” Rather than just write it and pitch it, Murphy went into the studio and recorded it with his good friend Kenny Chesney.

The finding grace in a tough place, the mid-tempo song, with its drop-down shuffle that flows into a reggae undertow on the chorus, cracked the Country Top 40 just two weeks after add-date. Moving from 44 to 37 with a bullet on the Billboard chart, “Alright” leaps from 52 to 39 with a bullet on Mediabase.

“I knew when I heard it, it was a big ole hit,” says duet partner and co-producer Chesney. “And as much as I would’ve loved to have had it for one of my records, I was happy when David Lee said he wanted to cut it. He deserves to have a song as good as this… and I was, as I know I’ve said, really happy that he asked me to sing on it with him, because some songs just feel good going down.”

The guy Chesney calls “the original hillbilly rock star” is no stranger to great songs. Over the last dozen years or so, he’s penned No. 1s for Jason Aldean (“Big Green Tractor,” “The Only Way I Know”), Thompson Square (the Grammy-nominated “Are You Gonna Kiss Me Or Not”), Jake Owen (“Anywhere With You”) and Chesney (“Living In Fast Forward,” “Live a Little,” “Til It’s Gone”).

With the No. 1 “Dust on the Bottle” and 1995’s Most Played Song “Party Crowd,” the songwriter from Southern Illinois established a way of writing that gave regular lives desirability. That accessibility has long been an earmark of Murphy’s writing, and it certainly defines “Everything’s Gonna Be Alright.”

Murphy says of the song’s origins, “You watch the news, it’s rough. You can get caught up in that, or step back and trust life. Sometimes, a deep breath changes everything.”

Mostly, the percolating duet feels good. “Alright” suggests the solace of seeking balance to get through what life hands you may not be the worst idea in a world of urgent news cycles, the ever-quickening tech universe and often increasing workloads.

The lead track from Murphy’s upcoming No Zip Code, co-produced by Chesney, Buddy Cannon (Willie Nelson, Alison Krauss, Merle Haggard) and Murphy, has arrived just in the nick of time. For those who like their country chill, with a dash of reggae, “Alright” is a sweet spot in a crazy space.

After two weeks, landing in the Top 40 is a good start as the holidays arrive. Whether it’s your in-laws, your outlaws, work, traffic, or worse, when you start to flinch, just turn up the radio and exhale.