DARIUS RUCKER & THE TROUBLEMAKERS ARE GOING “STRAIGHT TO HELL” 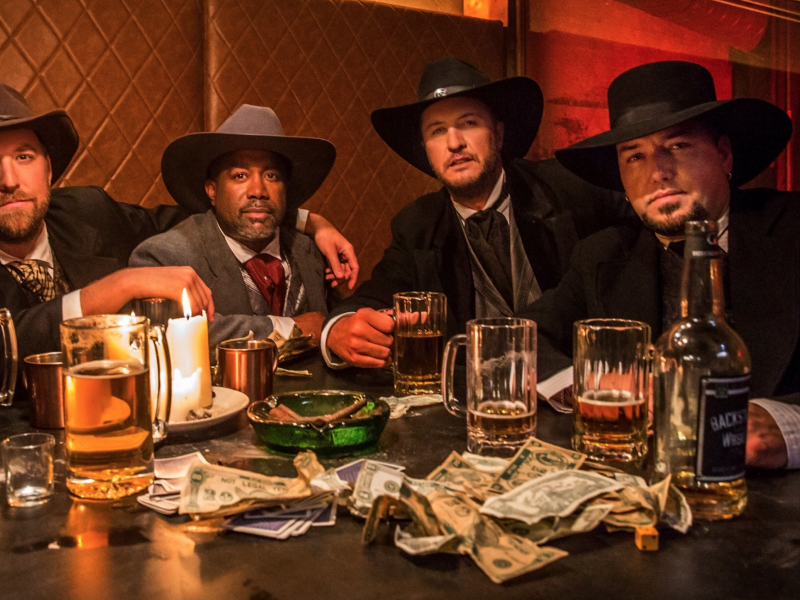 Darius Rucker brings his best friends along for a night of fun with a prohibition-era backdrop in the new music video for “Straight To Hell,” his fresh take on the Drivin' N Cryin’ classic.

“Any time you put the four of us together it’s going to be a good time,” said Rucker. “I’ve been wanting to cut this song for a while, so to be able to not only record it but to also get some of my best friends to join me was so much fun. The only thing I've ever asked the label to do for me is whether this is a single or not, we had to make a music video for this song.”

Rucker joined Hoda Kotb on NBC’s “TODAY” Wednesday, June 6 to share a teaser of the video before reuniting with Aldean, Bryan and Kelley that night to close out the CMT Awards with a rousing performance of the song.

The sold-out crowd at Nissan Stadium was treated to an in-stadium premiere of the video the following evening, prior to Rucker and Aldean's live CMA Fest performances. Watch the full video now.

Rucker recently achieved his ninth career No. 1 on the country charts with “For The First Time” and will unite with Charles Kelley once again to co-headline the Summer Plays On Tour with Lady Antebellum this summer.

About Darius Rucker
Rucker first attained multi-Platinum status in the music industry as the lead singer and rhythm guitarist of GRAMMY award-winning Hootie & the Blowfish. Since releasing his first country album in 2008, he has celebrated four summits to the top of the Billboard Country albums chart and earned a whole new legion of fans. In 2014, Rucker won his third career GRAMMY award for Best Solo Country Performance for his 4x Platinum selling cover of Old Crow Medicine Show’s “Wagon Wheel,” off his album, True Believers. Rucker’s first two country albums, Learn To Live and Charleston, SC 1966 produced five No. 1 singles including “Come Back Song,” “This,” “Alright,” “It Won’t Be Like This For Long,” and “Don’t Think I Don’t Think About It.” Southern Style, his fourth studio country album, featured his seventh No. 1 single “Homegrown Honey,” co-written by Rucker, label mate Charles Kelley of Lady Antebellum, and Nathan Chapman. Rucker’s latest album on Capitol Records Nashville, When Was The Last Time, features “If I Told You” and “For The First Time," his eighth and ninth No. 1s on country radio.

About Jason Aldean
"Aldean has opted to not back down and continue working in the well-worn groove" (UPROXX) that has helped define the genre’s 21st century with his sure-footedness, which plays into more than 15 million total album sales, dozens of sold-out stadium shows and countless recognition from the GRAMMYs, ACMs, CMAs, BBMAs, People’s Choice Awards and more. Continuing that momentum, Aldean is only the second Country act in history to score four consecutive chart-toppers on the all-genre Billboard 200 albums chart with REARVIEW TOWN, with six of his previous LPs have achieved PLATINUM certification or better. Aldean's wide-open approach has made him a perennial live-show favorite for the format as he has headlined the biggest stadiums in the United States. He continues to do so on his HIGH NOON NEON TOUR and "doesn't waste any time ripping through 23 songs during his 95-minute set” (Des Moines Register). For more information and for a full list of upcoming tour dates, www.jasonaldean.com.

About Luke Bryan
Country music superstar Luke Bryan is a two-time Academy of Country Music and Country Music Association Entertainer of the Year and a five-time host of the ACM Awards. Luke has more certified digital singles than any other country artist with 40 million tracks and 12 million albums with three billion music streams and he was the most-streamed country artist from 2012 to 2016. Luke has placed 20 singles at #1, 11 of which he co-wrote, and has headlined arena tours and sold-out stadiums across the U.S. and performed for 1.5 Million fans in 2017. His “What Makes You Country Tour” resumed May 31 at Rogers Centre in Toronto, his first of 13 stadiums concerts planned during the tour this year.

About Charles Kelley
Charles Kelley of Lady Antebellum and the multi-Platinum trio have launched their climbing single which serves as the title-track to their No. 1 sixth studio album, “Heart Break.” The current release follows more than 18 million units, nine No. 1 hits, ACM and CMA “Vocal Group of the Year” trophies three years in a row and other honors including seven GRAMMYs, Billboard Music Awards, People’s Choice Awards and Teen Choice Awards.  Along with his success as part of Lady Antebellum, Kelley also earned a GRAMMY nomination for “Best Country Duo/Group Performance” for the title track of his solo record “The Driver,” and has penned No. 1 hits recorded by artists including Luke Bryan and Darius Rucker. The trio will team with Darius Rucker this summer for their co-headlining Summer Plays On Tour, which kicks off July 19. For more information visit www.ladyantebellum.com.