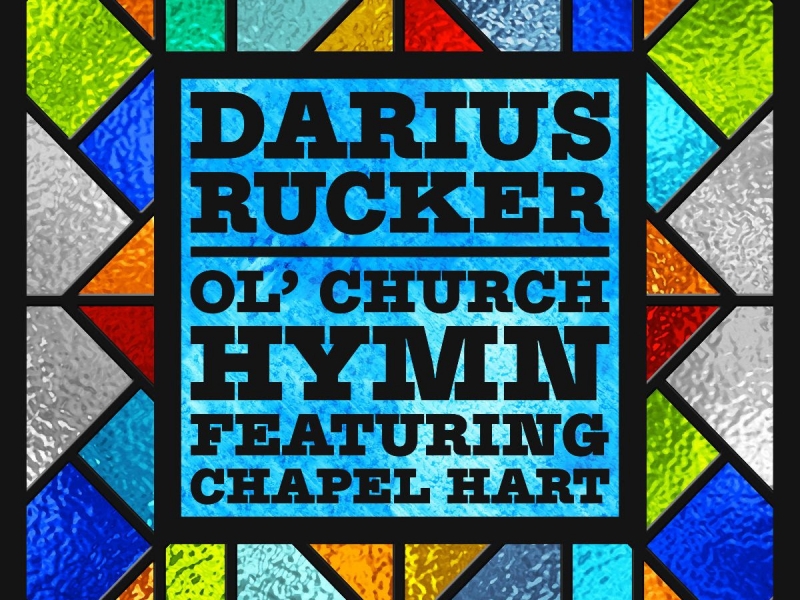 NASHVILLE, Tenn. – Multi-Platinum star Darius Rucker continues to unveil new music as he puts the finishing touches on a forthcoming album, with “Ol’ Church Hymn” featuring rising trio Chapel Hart set for release Friday, Sept. 30. The song comes on the heels of another collaboration from Rucker and the trio, who joined forces for a performance of Bonnie Raitt’s “Something to Talk About” during last week’s “America’s Got Talent” season finale on NBC. Watch the electrifying performance HERE and pre-order / pre-save “Ol’ Church Hymn” HERE.

Written by Rucker together with Ben Hayslip, Josh Miller and Greylan James, the gospel-inspired love song features Rucker’s rich baritone vocals, praised by Billboard as “one of the most distinctive voices of country’s modern era,” joined by the three-part harmony of Chapel Hart to profess a born-again love in the joyful chorus:

“Like so many people, I was blown away when I saw Chapel Hart’s original response to ‘Jolene,’” notes Rucker. “I was recording ‘Ol’ Church Hymn’ at the time and instantly had this vision of it becoming a duet once I heard their voices. I’m so thankful they said yes to singing on it with me, and I can’t wait to see the huge career they’re going to have.”

“He really took a chance on us… He saw some of our stuff online and he was like ‘I love what you ladies are doing. I have an idea and I want to hear you guys on this song,’” Chapel Hart’s Devynn Hart shared recently.

The new duet will be featured on Rucker’s forthcoming album – his first solo project since 2017’s critically acclaimed When Was the Last Time. Fans can also see Rucker perform live as he brings the inaugural Riverfront Revival festival to his hometown of Charleston, S.C. on October 8 and 9, with Brothers Osborne, SUSTO, Jimmie Allen, Charley Crockett and more joining him on the lineup. Limited tickets remain available for purchase at RiverfrontRevival.com.

About Darius Rucker
Rucker first achieved multi-Platinum status in the music industry as lead singer and rhythm guitarist of the GRAMMY Award-winning band Hootie & the Blowfish, who have sold more than 25 million albums worldwide including their Diamond-certified debut Cracked Rear View, which remains among the Top 10 best-selling studio albums of all time. Since releasing his first Country album in 2008, Rucker has earned a whole new legion of fans with four No. 1 albums on the Billboard Country chart, including RIAA Platinum-certified Learn to Live and True Believers, plus 10 No. 1 singles at Country radio and 11 Gold, Platinum or multi-Platinum certified hits. Rucker was inducted as a Grand Ole Opry member in 2012 and in 2014 he won his third career GRAMMY Award for Best Solo Country Performance with his 9x Platinum version of Old Crow Medicine Show’s “Wagon Wheel,” one of the Top 5 best-selling Country songs of all time. He co-hosted the 54th annual CMA Awards in 2020 and topped the charts at Country radio once again with “Beers And Sunshine” in 2021. New songs “My Masterpiece” and “Same Beer Different Problem” are available everywhere now as Rucker puts the finishing touches on a forthcoming album, with “Ol’ Church Hymn” featuring Chapel Hart set for release September 30.

As a lifelong philanthropist, Rucker co-chaired the capital campaign that generated $150 million to help build the new MUSC Shawn Jenkins Children's Hospital in his hometown of Charleston, S.C. and has raised over $3 million for St. Jude Children's Research Hospital through his annual Darius & Friends benefit concert and golf tournament. In addition, Rucker has advocated for over 200 charitable causes supporting public education and junior golf programs in South Carolina through the Hootie & the Blowfish Foundation and serves as a National Chair for the National Museum of African American Music in Nashville, Tenn. Rucker is also an avid sports fan, with his NFL x Darius Rucker Collection by Fanatics apparel line available at NFLshop.com, and he is part of the Music City Baseball investment group working to bring an MLB team to Tennessee in addition to serving as a partner at the MGC Sports & Entertainment agency.

About Chapel Hart
Lights, cameras, microphones, a prayer & HERE THEY GO! Danica and Devynn Hart, along with their cousin Trea Swindle, make up Chapel Hart and have proven they are truly a force to be reckoned with. These ladies have found a way to gift wrap their Mississippi roots & Louisiana spunk and share it with listeners around the world.

In 2021 Chapel Hart was inducted into CMT’s Next Women of Country, the institution that has been known to help up and coming female country artists such as Kelsea Ballerini, Ashley McBride, & Gabby Barrett... to name a few. This Mississippi trio’s music has reached fans around the globe earning them the title of “International Group of the Year” as well as “International Song of the Year” for the single “You Can Have Him Jolene” in Scotland. They were also nominated in multiple categories by the British CMAs including “Group of the Year” and “Album of the Year” for their sophomore release “The Girls Are Back In Town.”