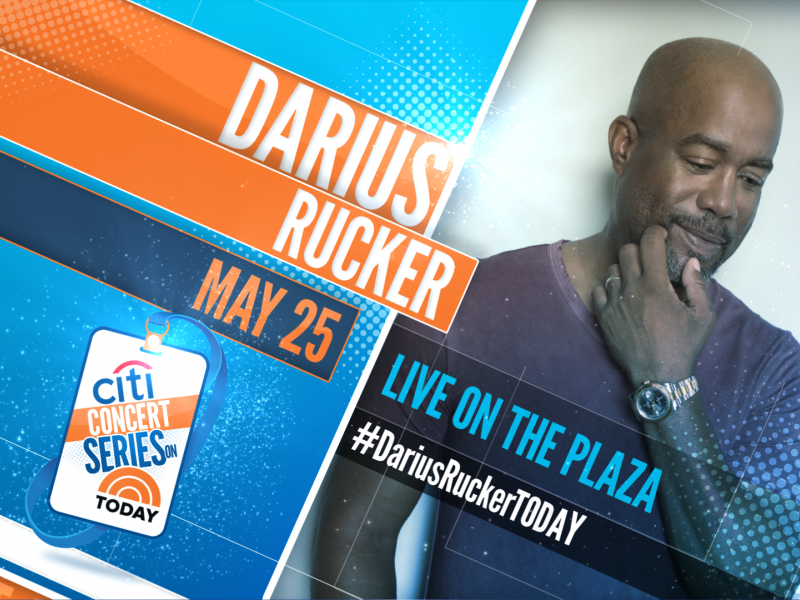 Multi-Platinum superstar Darius Rucker will grace the TODAY plaza stage on Friday, May 25 as part of NBC’s Citi Concert Series on TODAY. The three-time GRAMMY winner released When Was The Last Time, his latest album on Capitol Records Nashville, in October 2017 and the album's second single, "For The First Time," is currently Top 5-and-climbing.

"I always love playing for our incredible fans in New York City" says Rucker, "and I can't think of a better place to get summer started than out on the TODAY plaza."

The Citi Concert Series on TODAY performance kicks off a year full of live music for Rucker, who will co-headline the Summer Plays On Tour with Lady Antebellum before traveling to play a run of shows in the U.K. this fall. Rucker will also reunite with his Hootie and the Blowfish bandmates for a special one-night-only event alongside Jason Aldean at Sun Trust Park in Atlanta on July 21.

The May 25 appearance marks Rucker's first return to the New York City area since performing at the iconic Apollo Theater last fall, where The New Yorker called his vocal performance "extraordinary: rich, round, and full of nuance." His Summer Plays On Tour will bring him back to the region with an August 3 performance at the P.N.C. Bank Arts Center in Holmdel, N.J. and an August 4 show at the Northwell Health at Jones Beach Theater in Wantagh, N.Y.

About Darius Rucker
Rucker first attained multi-Platinum status in the music industry as the lead singer and rhythm guitarist of GRAMMY award-winning Hootie & the Blowfish. Since releasing his first country album in 2008, he has celebrated four summits to the top of the Billboard Country albums chart and earned a whole new legion of fans. In 2014, Rucker won his third career GRAMMY award for Best Solo Country Performance for his 4x Platinum selling cover of Old Crow Medicine Show’s “Wagon Wheel,” off his album, True Believers. Rucker’s first two country albums, Learn To Live and Charleston, SC 1966 produced five No. 1 singles including “Come Back Song,” “This,” “Alright,” “It Won’t Be Like This For Long,” and “Don’t Think I Don’t Think About It.” Southern Style, his fourth studio country album, features his seventh No. 1 single “Homegrown Honey,” co-written by Rucker, label mate Charles Kelley of Lady Antebellum, and Nathan Chapman. Rucker’s latest album on Capitol Records Nashville, When Was The Last Time, featured the lead single “If I Told You,” is his eighth No. 1 on country radio. The album's second single, "For The First Time," is currently Top 5-and-climbing.