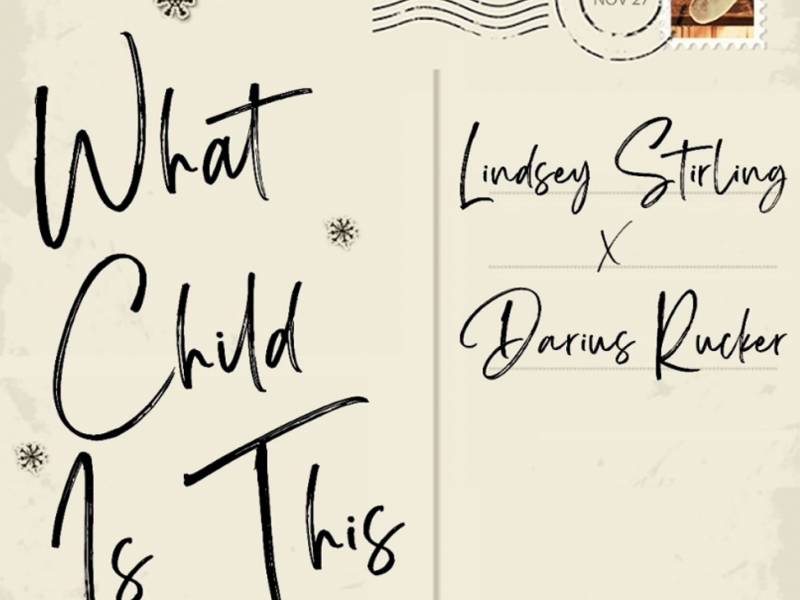 NASHVILLE, Tenn. – Three-time GRAMMY winner and recent CMA Awards host Darius Rucker has teamed up with Platinum-selling electronic artist and violinist Lindsey Stirling for a special performance of the classic Christmas carol “What Child Is This” for this year’s “CMA Country Christmas” television special, airing Monday, November 30 at 9/8c on ABC. The two superstars have also released the duet today as a digital-only single; listen HERE.
“I was so honored when the CMA asked me to perform ‘What Child Is This’ and to be getting to do it with an amazing musician like Lindsey is just awesome,” notes Rucker, who also recently co-hosted the 54th annual CMA Awards and performed alongside Katy Perry on this past weekend’s American Music Awards.

“I was so excited to be a part of ‘CMA Country Christmas’ again this year,” adds Stirling. “Every year, they give me an amazing chance to sparkle in their spectacular show. This year was extra special since I got to collaborate with the amazing Darius Rucker. Hope everyone loves it as much as we do!”

Rucker also recently released an original holiday song with his Hootie & the Blowfish bandmates and talented young songstress Abigail Hodges, with heartfelt track “Won’t Be Home For Christmas” honoring the sacrifice of military members and their families, and his 2014 album Home For The Holidays remains in heavy rotation by fans and radio alike every holiday season. Meanwhile, his current feel-good single “Beers And Sunshine” is Top 15 and climbing at Country radio.

Stirling previously released a solo, instrumental version of “What Child Is This” on her 2017 chart-topping holiday album Warmer In The Winter, the No. 1 new Christmas album of that year. Her live-streaming special “Lindsey Stirling: Home for the Holidays” airs on Saturday, December 12th, featuring a brand-new dazzling Christmas show created exclusively for an at-home viewing experience. Tickets are on sale now.

About Darius Rucker
Rucker first achieved multi-Platinum status in the music industry as lead singer and rhythm guitarist of the GRAMMY Award-winning band Hootie & the Blowfish, who have sold more than 25M albums worldwide including their Diamond-certified debut Cracked Rear View, which remains among the Top 10 best-selling albums of all time. Since releasing his first Country album in 2008, Rucker has earned a whole new legion of fans with four No. 1 albums on the Billboard Country chart, including RIAA Platinum-certified Learn to Live and True Believers, plus nine No. 1 singles at Country radio. In 2014, Rucker won his third career GRAMMY Award for Best Solo Country Performance with his 8x Platinum version of Old Crow Medicine Show’s “Wagon Wheel.” He recently co-hosted the 54th annual CMA Awards and his current single, "Beers And Sunshine," is Top 15 and climbing at Country radio.

As a lifelong philanthropist, Rucker supports the MUSC Children's Hospital in his hometown of Charleston, South Carolina and has also raised millions of dollars for St. Jude Children's Research Hospital through his annual Darius & Friends benefit concert and golf tournament. Rucker has also advocated for over 200 charitable causes supporting public education and junior golf programs in South Carolina through the Hootie & the Blowfish Foundation.

About Lindsey Stirling
Lindsey Stirling is known all over the world for her unique, futuristic violin-driven electronic music. Since the release of her 2012 self-titled debut, the Arizona-raised, Los Angeles-based artist has racked up tens of millions of followers worldwide and more than 3 billion total views on YouTube. Stirling’s sophomore album Shatter Me was certified Gold by the RIAA, after debuting at No. 2 on the Billboard Top 200 and No. 1 on the Dance/Electronic Albums Chart and holding the No. 1 spot on the Classical Albums Chart for 21 consecutive weeks. Her third studio album Brave Enough, featuring guest appearances from Dan + Shay, Christina Perri, Rivers Cuomo, Andrew McMahon and others, earned Stirling her second Billboard Music Award for “Top Dance/Electronic Album.” Stirling’s latest release, her fifth album Artemis (released September 2019 via BMG), debuted at No. 1 on Billboard’s Dance/Electronic Albums Chart and remained on the chart for 15 combined weeks. Artemis has also been turned into a successful comic book series. Additionally, Stirling co-wrote The New York Times best-selling book The Only Pirate at the Party with her sister Brook S. Passey, was the runner-up on Season 25 of “Dancing With the Stars” and has appeared on “America’s Got Talent.” The multi-hyphenate star, who launched a virtual series and podcast “String Sessions” earlier this year, is also currently helping families in need through her nonprofit charity outreach program The Upside Fund. For more information, visit www.lindseystirling.com and follow on Facebook @lindseystirlingmusic and Instagram and Twitter @lindseystirling.