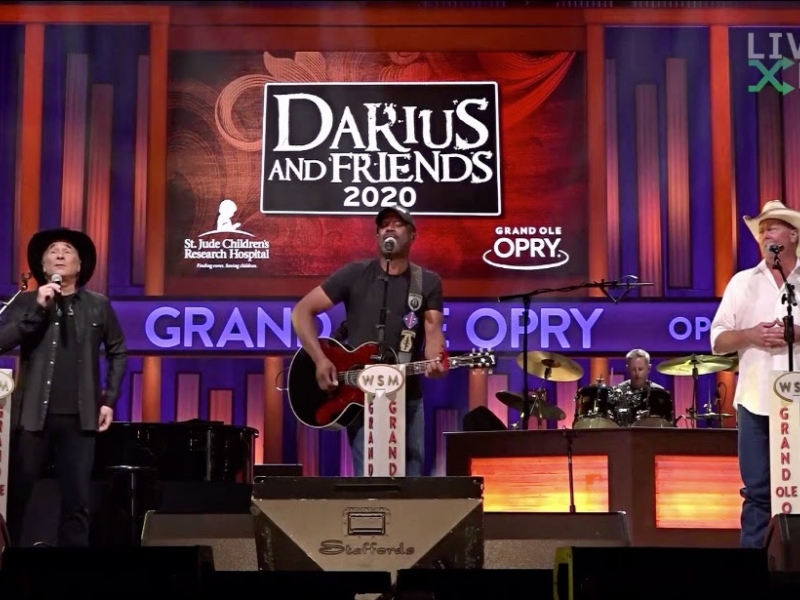 Three-time Grammy Award winner Darius Rucker continues to give back to St. Jude Children’s Research Hospital, with the Thursday, July 30 live-streamed edition of his annual “Darius & Friends” benefit concert raising over $255,000 and adding to the event’s overall total of more than $2 million.

“When we first started talking about this year’s concert, which usually takes place during the week of CMA Fest, I had the idea to make it a really fun night of ’90s Country,” shares Rucker. “Even though gathering in person for our normal show wasn’t possible this year, we still wanted to do as much as we could to support the great work happening at St. Jude. I’m so thankful to my friends Clint Black and Tracy Lawrence for helping that ’90s Country vision still come to life, and to the folks at LiveXLive for bringing this concert to everyone’s screens at home.”

Broadcasting from the iconic Grand Ole Opry stage and hosted by WSM’s own Bill Cody, the event began with a moving video package from the hospital known around the globe for treating childhood cancer and other life-threatening diseases before Rucker kicked off the evening’s festivities with his chart-topper “Alright” and his most recent No. 1 hit “For The First Time.”

Pausing to reflect on the impact of how St. Jude cares for families who face the heartbreaking reality of having a child diagnosed with cancer, Rucker then introduced his first guest of the evening, noting “it’s always special when you meet your heroes and they’re everything you imagined they’d be.”

Strolling on stage to a smattering of applause from Rucker’s band, The Carolina Grey Boys, Black shared his trademark sense of humor as he remarked on the missing Opry House audience before treating fans watching at home to his new single “America (Still In Love With You)” and his chart-topping hit “A Good Run of Bad Luck.”

Rucker then returned to the microphone to share the story of earning his first No. 1 at Country radio with “Don’t Think I Don’t Think About It” and followed that with yet another chart-topper in “If I Told You.” He then entertained fans with the debut performance of his forthcoming single, “Beers And Sunshine,” and “a pretty good song to be playing with everything going on right now,” his Hootie & the Blowfish smash hit “Hold My Hand.”

Next on stage was multi-Platinum artist Lawrence, who performed his No. 1 hit “Find Out Who Your Friends Are” before inviting Rucker back to center stage. “I’ve played this song in my set for probably 14 years, so this is really special,” noted Rucker as the two joined forces on three-week No. 1 “Time Marches On.”

Rucker then treated fans to a final solo performance with “Come Back Song” before the evening ended according to tradition, as the three artists came together for a high-energy “Wagon Wheel” singalong to close out the show.

The annual fundraising event, made possible with support from generous sponsors CDW, Intel, PNC Bank, Cigna, Hendrix Enterprises and Delta Dental of Tennessee, helps ensure families never receive a bill from St. Jude for treatment, travel, housing or food – because all a family should worry about is helping their child live.

Rucker, who will again perform live from the Grand Ole Opry on Saturday, August 15 for the 4,937th consecutive Saturday night broadcast of the show, is also set to release new music with feel-good summer single “Beers And Sunshine” making a world premiere at Country radio this Thursday, August 6 and available everywhere on Friday, August 7.

For more information, visit www.DariusRucker.com and follow on social media @DariusRucker. Fans can also continue to donate to St. Jude in honor of “Darius & Friends” HERE and photos from the live stream powered by LiveXLive are available HERE.

About Darius Rucker
Rucker first achieved multi-Platinum status in the record industry as lead singer and rhythm guitarist of the Grammy Award-winning band Hootie & the Blowfish. Since releasing his first Country album in 2008, he’s enjoyed four No. 1 albums on the Billboard Country chart and nine No. 1 singles at Country radio, earning a whole new legion of fans. In 2014, Rucker won his third career Grammy Award for Best Solo Country Performance with his 8x Platinum version of Old Crow Medicine Show’s “Wagon Wheel.” As a lifelong philanthropist, Rucker is a constant supporter of the MUSC Children’s Hospital in his hometown of Charleston, South Carolina. He has also raised millions of dollars for St. Jude Children's Research Hospital through his annual Darius & Friends benefit concert and golf tournament, as well as for more than 200 charitable causes supporting public education and junior golf programs in South Carolina through the Hootie & the Blowfish Foundation. In 2019, Rucker embarked on the sold-out Group Therapy Tour with his Hootie & the Blowfish bandmates as they celebrated the 25th anniversary of generation-defining smash Cracked Rear View in addition to the November 1, 2019 release of Imperfect Circle, their first album in nearly 15 years.

About Clint Black
Clint is celebrating the release of his 12th studio album, Out of Sane, marking his first studio project release in five years and it has been met with excitement from his fans. The lead single, “America (Still In Love With You),” is Clint’s love letter to our great nation. Clint has one of the most storied careers in modern music. He surged to superstardom as part of the fabled Class of ’89, reaching No. 1 with five consecutive singles from his triple-Platinum debut, Killin’ Time. He followed that with the triple-Platinum Put Yourself in My Shoes, and then a string of Platinum and Gold albums throughout the ’90s. Black’s catalog produced 22 No. 1 singles, 31 top ten singles, and made him one of the most successful singer/songwriters of the modern era. Clint has sold over 20 million records, earned more than a dozen Gold and Multi-Platinum awards in the U.S. and Canada, landed nearly two dozen major awards and nominations including a Grammy, and earned a star on the Hollywood Walk Of Fame.

About the Grand Ole Opry
To plan an Opry visit, call (800) SEE-OPRY or visit opry.com. The Opry presents the best in country music live every week from Nashville, Tenn.  The Opry can be heard at opry.com and wsmonline.com, Opry and WSM mobile apps, SiriusXM, and its flagship home, 650 AM-WSM. The Grand Ole Opry is owned by Ryman Hospitality Properties (NYSE: RHP). For more information, visit opry.com.

About LiveXLive Media, Inc.
Headquartered in Los Angeles, California, LiveXLive Media, Inc. (NASDAQ: LIVX) (pronounced Live “by” Live) is a global platform for live stream and on-demand audio, video and podcast content in music, comedy, and pop culture. LiveXLive, which has streamed over 1,100 artists in 2020, has become a go-to partner for the world’s top artists and celebrity voices as well as music festivals concerts, including Rock in Rio, EDC Las Vegas, and many others. In April 2020, LiveXLive produced its first 48-hour music festival called “Music Lives” with tremendous success as it earned over 50 million views and over 5 billion views for #musiclives on TikTok on 100+ performances. LiveXLive's library of global events, video-audio podcasts and original shows are also available on Amazon, Apple TV, Roku and Samsung TVs in addition to its own app, destination site and social channels. For more information, visit www.livexlive.com and follow @LiveXLive on Facebook, Instagram, TikTok, Twitter and YouTube.