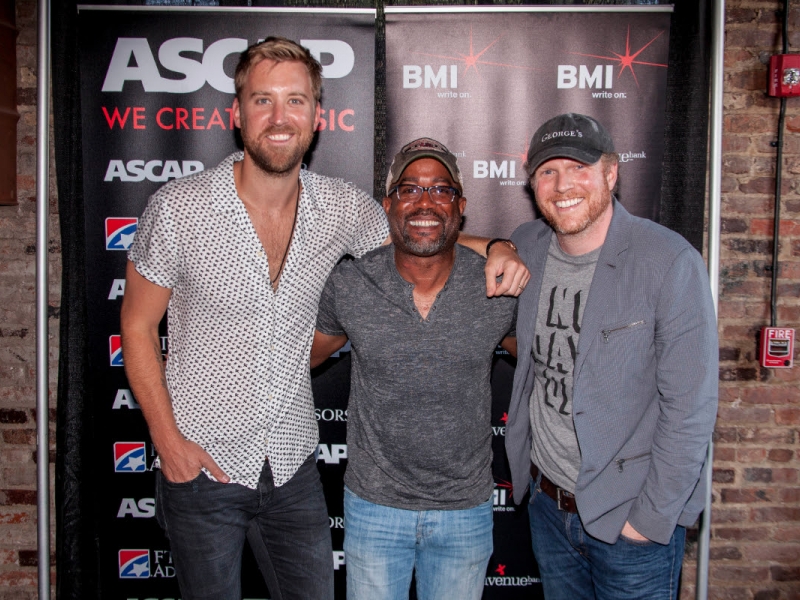 NASHVILLE, Tenn. – (Aug. 25, 2015) – As Darius Rucker, Charles Kelley of Lady Antebellum and Nathan Chapman have learned, sometimes you walk out of the writing room with more than just a hit song. Friends before they teamed up, the three songwriters of Rucker’s No. 1 country hit, “Homegrown Honey,” now have a bond few others get to experience.

“Every song I’ve ever written that I love immensely or became a big hit, there’s a bond there,” Rucker told reporters. “You remember sitting in that room, and we all do it all the time. We all sit in a room and we write thousands of songs a year and we punch them in. There’s all these songs in Nashville and you were in a room with two other guys, and here it is the most-played song in our business. That creates a bond that’s lasting, that’s unbelievable. When you see each other, you shake hands and giggle.”

Both Rucker and Kelley told the crowd how excited they were to celebrate Chapman’s first No. 1 hit as a songwriter (he has earned several as a producer, most notably for Taylor Swift). The song was produced by Frank Rogers and is Rucker’s seventh No. 1.

The song, illustrated by a video shot in Rucker’s native Charleston, S.C. and around the world, is about a young woman who leaves her hometown on a quest of discovery. Rucker has been on his own travels recently, journeying to Nashville to tape a Country Music Association edition of PBS’ Front & Center. Later this week, he’ll wrap the first leg of hisSouthern Style Tour, which has drawn more than 700,000 fans to date, after an appearance Friday morning on TODAY's Toyota Concert Series at Rockefeller Center in New York.

After that, he’ll be appearing Sept. 9 on ABC’s Jimmy Kimmel Live, then kicks off the fall leg of the Southern Style Tour on Oct. 8 in Chicago with David Nail and A Thousand Horses as support. Rucker’s latest single, the title cut from his latest Capitol Records Nashville release, is currently climbing the charts at country radio.

About Darius Rucker
Capitol Records Nashville recording artist Darius Rucker released his fourth No. 1 country album Southern Style on March 31, 2015, the same week lead single “Homegrown Honey” became his seventh No. 1 hit. Rucker’s first three albums - Learn To Live, Charleston, SC 1966 andTrue Believers - produced six No. 1 singles, including “Come Back Song,” “This,” “Alright,” “It Won’t Be Like This For Long” and “Don’t Think I Don’t Think About It.” His 2013 No. 1 “Wagon Wheel” won a GRAMMY Award, stayed atop the charts for two weeks and was nominated for Song of the Year at the Country Music Association and Academy of Country Music awards. In 2009, Rucker was named New Artist of the Year at the CMA Awards. He achieved a personal goal and childhood dream when he was inducted into the Grand Ole Opry on Oct. 16, 2012.
# # #
Media Contacts:
Essential Broadcast Media, LLC
Ebie McFarland / Darlene Hassett
(615) 327-3259
ebie@ebmediapr.com / darlene@ebmediapr.com
Press materials available at www.ebmediapr.com