DARIUS RUCKER CELEBRATES EIGHTH NO. 1 “IF I TOLD YOU” + PREVIEWS NEW MUSIC FROM FORTHCOMING ALBUM 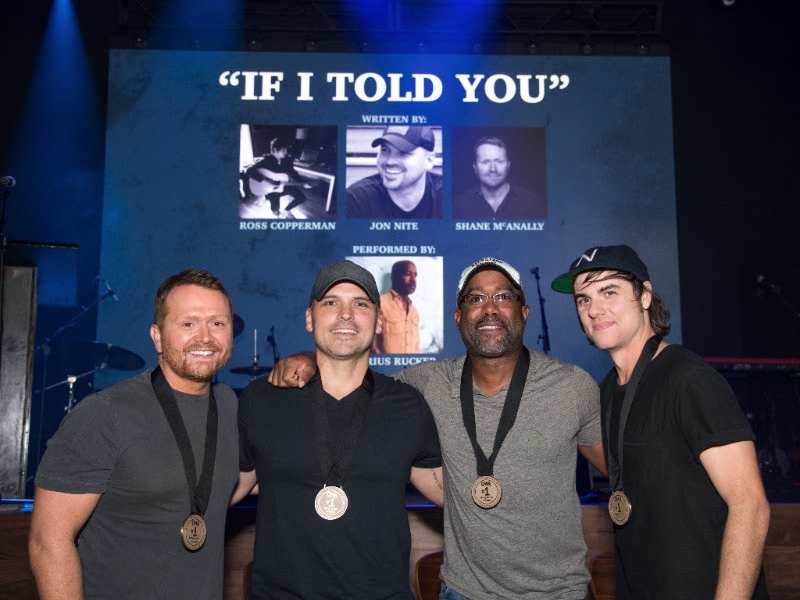 Darius Rucker toasted to songwriters Ross Copperman (BMI), Shane McAnally (GMR) and Jon Nite (ASCAP) at the No. 1 party celebrating “If I Told You” last night at the newly unveiled Topgolf complex in Nashville, Tenn. “If I Told You” is Rucker’s eighth No. 1 single since his debut in country music in 2008 and the first single from his upcoming fifth studio album on Capitol Records Nashville, WHEN WAS THE LAST TIME. As Rucker announced on theTODAY show earlier this summer, WHEN WAS THE LAST TIME will be released nationwide Friday, October 20.

Rucker expressed his gratitude to songwriters Copperman, Nite and McAnally, and described hearing himself on the track for the first time, "I came into the studio, and when we played it back I instantly thought this is exactly what I want to sound like. I was immediately so happy we chose this song."

The three-time GRAMMY Award winner later inaugurated Topgolf’s brand new Nashville stage with his band, The Carolina Grey Boys, to share an exclusive live preview of his new music with the partygoers. Rucker performed five new tracks from WHEN WAS THE LAST TIME, including crowd-favorite “Don’t,” which he also revealed will be offered as an instant grat download to exclusively to fans who preorder the new album.

As Rucker is known to be an avid golf enthusiast with his own monthly show, On Par with Darius, on SiriusXM PGA TOUR Radio, Topgolf’s Nashville opening was a fitting time and place for the festivities, co-hosted by ASCAP, BMI and GMR. After closing the performance with his 3x platinum-selling single “Wagon Wheel” Rucker and his guests kept the party going by hitting the links.

As Rucker previously revealed to Billboard, he has tapped “If I Told You” co-writer Ross Copperman (Dierks Bentley, Brett Eldredge, Keith Urban) as producer on WHEN WAS THE LAST TIME. The album’s second single, a song Rucker wrote with Derek George and Travis Hill called “For The First Time,” is available digitally now and currently climbing the country charts.

About Darius Rucker
Rucker first attained multi-Platinum status in the music industry as the lead singer and rhythm guitarist of GRAMMY award-winning Hootie & the Blowfish. Since re-introducing himself to the world as a country artist, he has released four consecutive albums to top the Billboard Country albums chart and earned a whole new legion of fans. In 2014, Rucker won his third career GRAMMY award for Best Solo Country Performance for his 4x Platinum selling cover of Old Crow Medicine Show’s “Wagon Wheel,” off his album, True Believers. Rucker’s first two country albums, Learn To Live and Charleston, SC 1966 produced five No. 1 singles including “Come Back Song,” “This,” “Alright,” “It Won’t Be Like This For Long” and “Don’t Think I Don’t Think About It.” Southern Style, his fourth studio country album, features his seventh No. 1 single “Homegrown Honey,” co-written by Rucker, label mate Charles Kelley of Lady Antebellum and Nathan Chapman. Rucker’s last single, “If I Told You,” is his eighth No. 1 on country radio and the first cut from When Was The Last Time, his forthcoming fifth album for Capitol Nashville, due out October 20.