DANIELLE BRADBERY IS PRAISE-WORTHY IN NEW VIDEO FOR "WORTH IT" 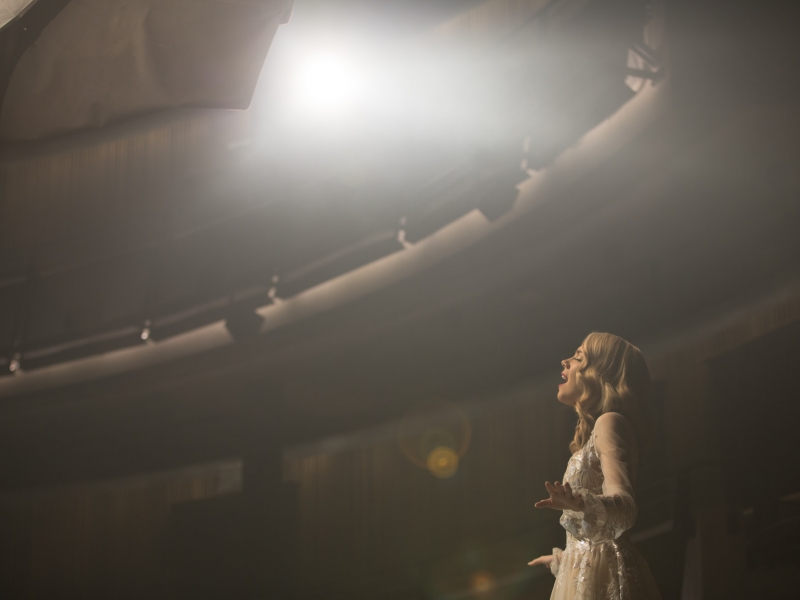 Danielle Bradbery builds upon the emotional story of her current single, “Worth It,” with an artful music video which premiered on People.com. The video for the empowering anthem is also now available onVevo and syndicators, as well as Spotify's "Wild Country" playlist.

The compelling video directed by Shaun Silva, and filmed at the Country Music Hall of Fame in Nashville, opens with Bradbery navigating an empty theater, speaking to the journey of the song and the impact of its powerful lyrics, "'Cause I'm worth it / You're crazy, baby, if you think that I don't know it / I ain't afraid to walk away / If you can't see it, believe it / And give me the love I'm deserving / 'Cause I know I'm worth it." It culminates as she envisions herself performing on the empty stage in a moment inspired by a similarly iconic scene in the popular film The Greatest Showman.

“This song was one of my favorite tracks on the album from the start, but it’s really taken on a life of its own since we released it,” said Bradbery. “It’s been so great to hear my fans’ stories about how they identify with the message and I’m so proud of this visual element we created to continue telling the story.”

“Worth It,” written by Bradbery together with Jeff Pardo and Molly Reed, carries the emotion and confidence to be vulnerable that Bradbery was able to capture with her first foray into songwriting for her sophomore album, I Don’t Believe We’ve Met.

She also recently announced a partnership with Nashville-based lifestyle brand ABLE. Bradbery designed a collection of accessories embellished with the phrase “Worth It,” with proceeds continuing to support ABLE’s focus on ending generational poverty by creating jobs for women who have often overcome extraordinary circumstances.

Currently nominated for two CMT Music Awards for Breakthrough Video of the Year ("Sway") and CMT Performance of the Year ("Stand Up for Something" at the 2017 CMT Artists of the Year), Bradbery is playing festivals and dates throughout the summer before heading across the pond to the U.K. this fall.

About Danielle Bradbery
Twenty one-year-old, multi-faceted artist Danielle Bradbery is stepping into her own lane with her sophomore album I DON’T BELIEVE WE’VE MET, out now on BMLG Records. As the title suggests, Bradbery re-introduced herself after taking time since her debut LP to focus on the writing process and for the first time, infusing her own story into her songs – penning seven of the album’s 10 tracks. Lead single “Sway,” written alongside Johan Fransson and GRAMMY®-winning songwriter Emily Weisband, perfectly infuses her Pop, R&B, soul and Country influences. The video for the single hit the No. 1 spot on iTunes upon release. Her new single, “Worth It” is currently being introduced to Country radio and follows national TV performances of the emotional tune on TODAY Show and The Voice. Bradbery is currently nominated for two CMT Music Awards for Breakthrough Video of the Year (“Sway”) and Performance of the Year (“Stand Up for Something” at the 2017 CMT Artist of the Year). Most recently nominated for ACM Awards New Female Vocalist of the Year, the Texas native has worked on fine-tuning her unique sound since getting her start winning Season 4 of NBC’s The Voice, where she soon found success with singles including the GOLD-certified “The Heart of Dixie” and “Young in America” off her self-titled debut album. Since then, Bradbery has joined the bill with notable acts like Blake Shelton, Brad Paisley, Miranda Lambert, Brett Eldredge, Hunter Hayes and Scotty McCreery. In addition to playing festivals throughout the summer, she has frequently surprised crowds on Thomas Rhett’s current HOME TEAM TOUR to perform their intoxicating duet “Playing With Fire” from the deluxe version of his sophomore album. For the latest updated and more, visit DanielleBradbery.com.