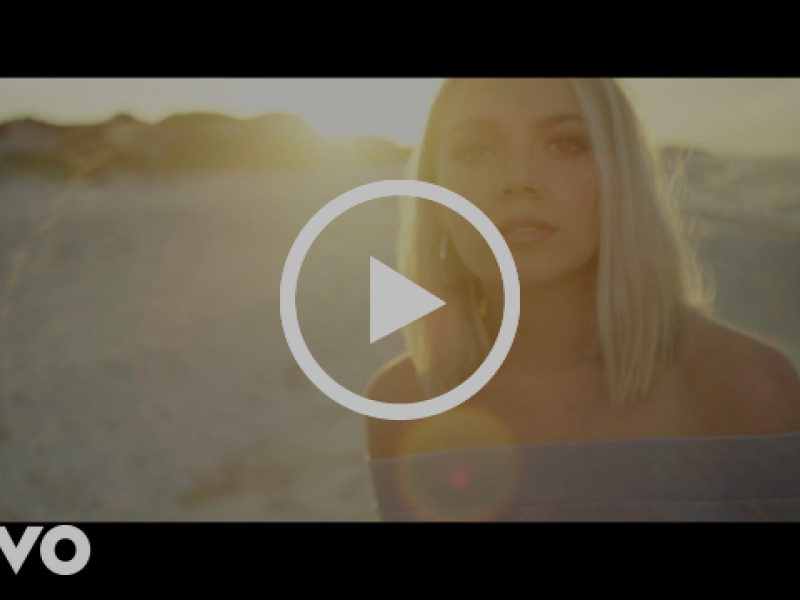 Vocal powerhouse Danielle Bradbery is joined by Thomas Rhett on the shores of Rosemary Beach, Fla. in the official music video for their “Goodbye Summer” collaboration, bringing to life the song’s bittersweet story of short-lived romance with a seaside video directed by Shaun Silva.

“It has been amazing to see the storyline of 'Goodbye Summer' played out,” reflects Bradbery. “The video shares the emotions that come with a summer love. Shaun Silva had such a beautiful vision for this video and really brought it to life. It was a lot of fun to have Thomas Rhett join me for the shoot in one of my favorite places, 30A.”

The official music video premiered exclusively with Refinery29 yesterday, Nov. 19, with the outlet praising Bradbery's “remarkably steady hand. Her voice slices through arrangements like a knife through a ripe avocado, and she is perfectly, enviably composed. She's releasing some of that composure [with 'Goodbye Summer'] though,” resulting in a “doleful duet” that is “a bit more plaintive.”People then gave fans a special behind-the-scenes look at the making of the video earlier today, Nov. 20, remarking that the 30A region of Florida so beloved to both Bradbery and Thomas Rhett “shines vividly in its natural splendor.”

Described by Taste of Country as a “pop-infused song tinged with heartbreak [which] paints a romantic picture of the ups and downs of love that comes with an expiration date” and by Rolling Stone as a “wistful” story of “an intense, fleeting relationship that evaporates like a mirage when the season is over,” “Goodbye Summer” is a reimagining of “Hello Summer” off Bradbery’s sophomore album I Don’t Believe We’ve Met.

“Watching this song grow since I first recorded the demo has been really fun,” says Thomas Rhett, who wrote the original rendition alongside Rhett Akins and The Cadillac Three's Jaren Johnston.  “30A was the perfect place to bring the video to life...we had a blast shooting it.”

Silva agrees, noting that “few things brand our hearts and minds the way a summer romance does. This song and this video tell that classic love story, where the sand of a coastal beach community is the same as the sand that falls freely from an hourglass. Our time may be limited, but the way we live in that moment is reckless and beautiful. It’s one of the few things we go into knowing what the end result must be, but for some reason we let go, give in, love… and in the end, we hurt but we don’t regret.”

Shortly after this story of beachfront romance was captured in beautiful Rosemary Beach, the area was struck by Category 4 Hurricane Michael, the strongest storm on record to hit the Florida Panhandle. As someone who saw her own mother’s home in Houston damaged by Hurricane Harvey last year, Bradbery felt compelled to help.

“Rosemary Beach has always been a special place to me, especially now that we captured its beauty in this video,” shares Bradbery. “I knew I wanted to help out the local community after Hurricane Michael hit, and the Rosemary Beach Foundation is the perfect organization to partner with. They were immediately providing meals and supplies to the people who lost everything, and now they’re distributing funds to local organizations involved in relief efforts – supporting everything from the rebuilding of homes to purchasing supplies for local schools.”

About Danielle Bradbery
Twenty-two-year-old, multi-faceted artist Danielle Bradbery has stepped into her own lane with sophomore album I Don’t Believe We’ve Met, out now on BMLG Records. As the title suggests, Bradbery re-introduced herself after taking time since her debut LP to focus on the writing process and, for the first time, infusing her own story into her songs – penning seven of the album’s 10 tracks. Lead single “Sway” perfectly infused her R&B, soul and country influences, while empowering follow-up anthem “Worth It” led to national TV performances of the emotional tune on NBC’s “TODAY” and “The Voice.” Now, Bradbery returns to radio airwaves with “Goodbye Summer,” a fresh take on album cut “Hello Summer” with Thomas Rhett adding a male perspective to the seasonal story of love and heartbreak. The Texas native has worked on fine-tuning her unique sound since getting her start winning Season 4 of NBC’s “The Voice” and was nominated this year for ACM New Female Vocalist of the Year as well as CMT Breakthrough Video of the Year and CMT Performance of the Year. She is currently touring fairs and festivals across the country before joining Kane Brown's Live Forever Tour as direct support for select dates in 2019.

About Thomas Rhett
Thomas Rhett’s Platinum-certified third album Life Changes (The Valory Music Co.) is the biggest, boldest-sounding record of his career, filled with a diverse batch of songs as he stretches his sound to new limits. Emphasizing his “detailed style of songwriting” (Rolling Stone), Life Changes was an instant hit upon its release, debuting at No. 1 on the all-genre Billboard 200 chart, marking the first Country release to take the top spot last year. It also drew a 2018 GRAMMY nomination for Best Country Album and has been streamed more than 944 million times, delivering a slew of RIAA-certified Platinum and Gold chart-toppers, bringing Thomas Rhett’s No. 1 tally to 11. His current single “Sixteen” is top 15 and rising at Country radio. Thomas Rhett was named iHeartRadio’s Country Artist of the Year for the second year in a row, following a CMA Triple Play award for penning three No. 1 songs within a 12-month period (“Die A Happy Man,” “Star of the Show” and Michael Ray’s “Think A Little Less”), adding to his collection of trophies from the Country Music Association, Academy of Country Music, Billboard Music Awards, CMT Music Awards and more. Thomas Rhett is set to bring his critically-acclaimed Life Changes Tour to Canada in April, and just announced his Very Hot Summer Tour running May through October 2019. For more information and for a full list of upcoming tour dates, visit www.ThomasRhett.com.