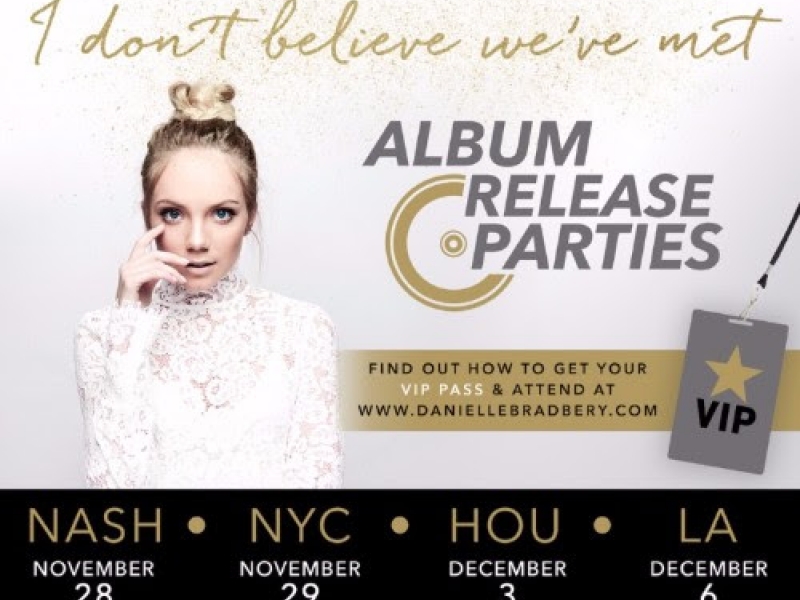 Wednesday, November 15, 2017 - 12:30pm
Danielle Bradbery knew she could only spend her next album’s release one way: celebrating with her fans who have supported her over the last four years as she found hersound and what she wanted to say writing the songs for her next project. The singer that Rolling Stone Country says has “returned with a fresh new sound" will commemorate the sophomore BMLG Records album I Don’t Believe We’ve Met, due December 1, with a four-show run in Nashville, New York City, Houston and Los Angeles. Fans will only be able to attend the release parties by ordering city-specific pre-order bundles HERE or by listening to one of the partnering radio stations to win.

I Don’t Believe We’ve Met release show dates and locations are below.

After releasing her lead single “Sway” to airwaves in August, Bradbery has since released tracks “Human Diary,” “Hello Summer,” “Potential,” and “Worth It” from what Billboard calls “an album that documents her transformation from a timid 16-year-old to a multi-faced artist while also giving fans a deeper look into who she is.”

Bradbery helped pen seven out of 10 songs on I Don’t Believe We’ve Met, a pivotal moment for her as she had never written songs before working on the project.

Fans will receive “Worth It” along with lead single “Sway,” “Human Diary,” “Hello Summer” and “Potential” instantly when they pre-order I Don’t Believe We’ve Met due December 1 HERE.

Bradbery was recently chosen to perform at CMT’s Next Women of Country and CMT’s Artists of the Year 2017 awards. Learn more about Danielle at DanielleBradbery.com or follow her on Facebook and Instagram @daniellebradbery and Twitter at @DBradbery.