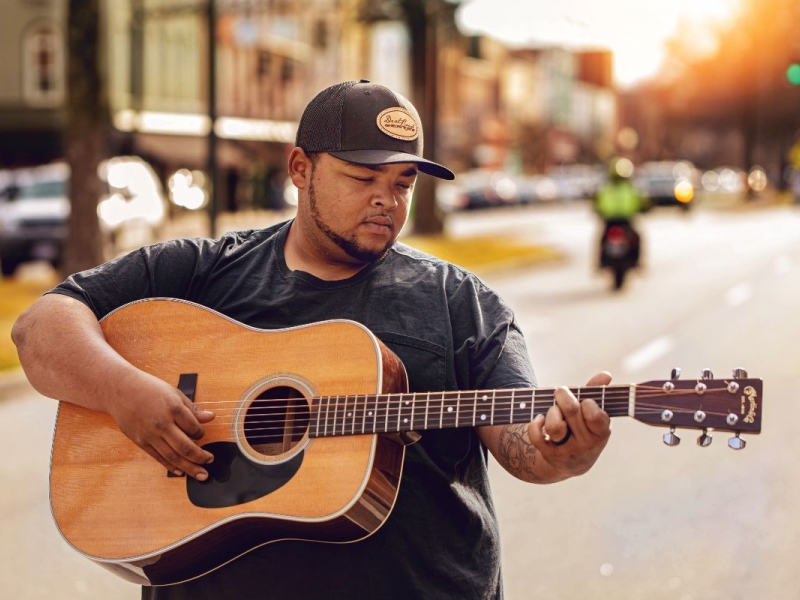 OLK COUNTY, Ga. – Nearly five years ago, clad in what he then considered his best performance attire – a black leather jacket, jeans, t-shirt and baseball cap – at just 19-years-old, small town Georgia native Dalton Doverauditioned for “The Voice” covering “Don’t Close Your Eyes.” Admittedly not knowing how else to pursue a career in music, Dover thanked celebrity judge Blake Shelton for turning his chair around, noting the Keith Whitley cover was the first he’d learned on guitar. He didn’t advance much further on the show, yet it solidified his pursuit of a career in music.

Fast-forward four years, an online exchange with producer Matt McVaney (McV) after the young producer discovered Dover’s Kidd G cover of “Dirt Road” on TikTok, and the Polk County, Georgia native – a county just northwest of Atlanta that is also home to Sam Hunt and Nick Chubb – is releasing “You Got A Small Town” on industry vet Jim Catino’s new Droptine Recordings this Friday, October 1, with Billboard sharing Dover “infuses his brand of country with a bluesy intensity,” and “the song's tale is lifted by blazing guitar lines and Dover's soaring vocals, transforming the track into a smoky love letter to small towns.”
“Growing up in a musical family, we’d sing for hours in church and then go home, sit on the front porch and keep singing,” Dover shares. “My grandpa would put on his favorite records and I’d listen to the stories. Seeing my own life in those lyrics is what made me fall in love with Country. I can’t believe I still get to play these songs on my front porch and yet all these people are now discovering them and telling me what my music means to them. It’s beyond what I ever dreamt it would feel like to have music be that connection for us all.”

“Dalton’s is one of the smoothest voices I’ve ever heard,” adds McV of the now 23-year-old singer/songwriter. “I’ve always wanted to find an artist that can walk into a room with just a guitar and just blow them away. Dalton has that it-factor along with an incredible personality and real love of Country music. He’s the real deal.”

Growing up in a town of just 1,200 people, the lyrics especially ring true for Dover:

“You Got A Small Town” Lyrics:
Take a back 40 story in the corner of a map dot
Two pump Texaco, pot hole black top
Tractors in pastures, going corn row slow
Add it all up and you know

‘Cus every stop sign’s marked with a shotgun
We pray for rain man when we ain’t got none
Got train trestle’s name over a two-lane main
Population sign don’t ever change
Every Friday night light fight song home team proud
Swear you’ll get out, but it’s where they’ll lay you down
Wrap it up in a county line that goes all the way around
You got a small town

See you at the DQ in the back parking lot
Paper bag on a cold can so you don’t get caught
Where you find the girl, change the world,
Never let her go
If that ain’t heaven, then it’s pretty damn close

‘Cus every stop sign’s marked with a shotgun
We pray for rain man when we ain’t got none
Got train trestle’s name over a two-lane main
Population sign don’t ever change
Every Friday night light fight song home team proud
Swear you’ll get out, but it’s where they’ll lay you down
Wrap it up in a county line that goes all the way around
You got a small town

More trucks than cars, one church two bars
Ain’t no doubt where you are