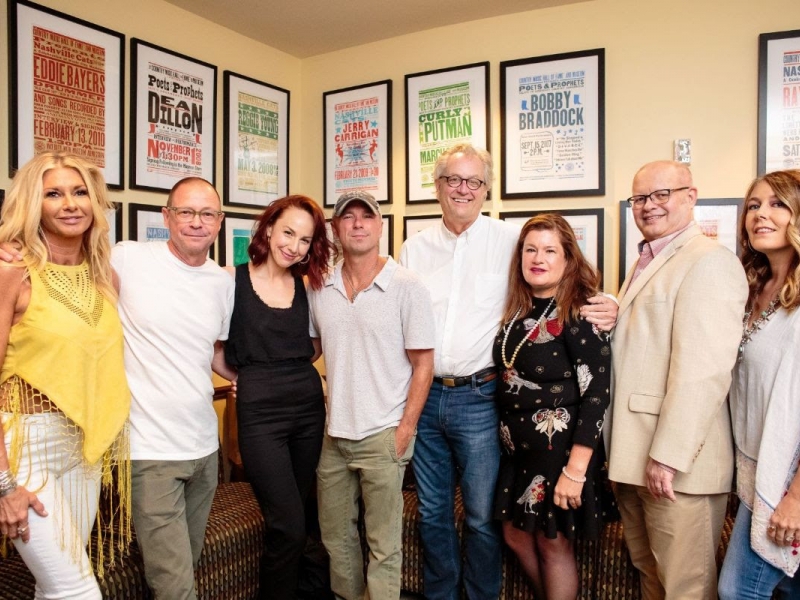 The program will be made available on the museum’s YouTube channel this fall.

For this discussion, Chesney was joined by photographers Ann, Rose and Trunnell, art director Lose and book editor Gleason, all of whom contributed to Kenny Chesney: Living in Fast Forward. The discussion traced the evolution of Chesney’s live shows, road family and No Shoes Nation, as well as the process of creating a photography book capable of conveying the emotional connection between performer and fans.

“I wanted to have a conversation to celebrate the work of these amazing photographers, whose eye has shown people what this looks like,” says Chesney, an eight-time Entertainer of the Year award winner. “To be able to catch the moment when dreams start to happen, and then you keep dreaming – that’s magic. A whole lot of people dreamed this along with us along the way, so this conversation was basically about the book, which is ultimately a love letter to the fans.”

Kenny Chesney: Living in Fast Forward recounts the growth of Chesney’s legendary shows, his substantial fan base, known as No Shoes Nation, and offers a sense of what it feels like to be on the road, on the stage, and, most of all, in the crowd on any of Chesney’s sold-out stadium tours.

Chesney, who is the only country artist in Billboard’s Top 10 Touring Acts of the Last 25 Years, had the top-grossing country tour of 2018 according to Pollstar, and is included in the museum’s exhibition American Currents: The Music of 2018. The singer-songwriter surpassed the million-tickets-sold mark at 1.3 million tickets sold, placing him fourth behind Taylor Swift, Jay Z and Beyonce’s co-headlining tour and the Eagles; last year saw Chensey pass the million-ticket mark at Boston’s Gillette Stadium alone.

American Currents: The Music of 2018, which highlights the top stories and trends from the past year in country music, runs through Feb. 2020.

Photos from the program taping can be found here (Credit: Erin Allender for the Country Music Hall of Fame and Museum):http://cmfftp.countrymusichalloffame.orgUsername: comguest
Password: 4Mediaonly

About the Country Music Hall of Fame and Museum
The Country Music Hall of Fame® and Museum collects, preserves, and interprets country music and its history for the education and entertainment of diverse audiences. In exhibits, publications, and educational programs, the museum explores the cultural importance and enduring beauty of the art form. The museum is operated by the Country Music Foundation, a not-for-profit 501 (c)(3) educational organization chartered by the state of Tennessee in 1964. The museum is accredited by the American Alliance of Museums, and welcomes over one million patrons each year, placing it among the most visited museums in the U.S. The Country Music Foundation operates Historic RCA Studio B®, Hatch Show Print® poster shop, CMF Records, the Frist Library and Archive, and CMF Press. Museum programs are supported in part by the Metropolitan Nashville Arts Commission and Tennessee Arts Commission.

More information about the Country Music Hall of Fame® and Museum is available at www.countrymusichalloffame.org or by calling (615) 416-2001.

About Kenny Chesney
An American musical force, Kenny Chesney has been heralded as “Country music’s only true long term stadium act” by Variety, “The King of the Road” by The Wall Street Journal and “The People’s Superstar” by The Los Angeles Times. With 40 No. 1 hits including “Get Along,” “American Kids,” “When The Sun Goes Down,” “I Go Back,” “Noise,” “Pirate Flag,” “Boys of Fall” and over 32 million albums sold, he has become the soundtrack for coming of age in the heartland this century. His commitment to his fans – known as No Shoes Nation – has seen Chesney be the only country artist on Billboard’s Top 10 Touring Acts of the past 25 Years, while consistently playing NFL stadiums across the US over the last dozen years. That commitment to giving his fans songs that hold their lives on the radio and at the eight-time Entertainer of the Year’s record-shattering shows reflects the passion that fuels the songwriter/superstar.