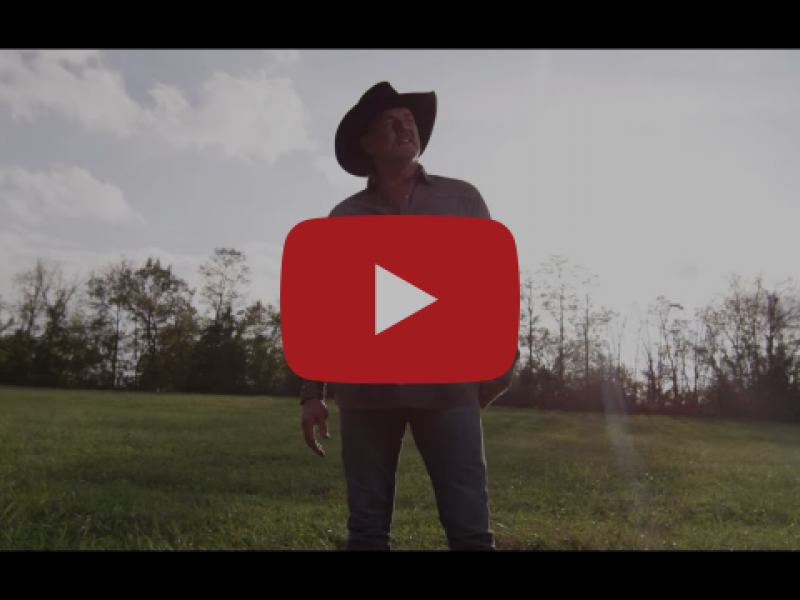 With over 11 million albums sold and over 20 charted singles in 25 years, country icon Trace Adkins debuts his new music video for the title track from his Verge Records EP “Ain’t That Kind of Cowboy” in Times Square with Viacom/CBS billboards, CMT and CMT.com.

“I love old westerns, and this song has western imagery throughout,” Adkins shared with CMT. “The directors had the idea of using the Dailey family to pay homage to the ‘modern-day’ cowboys. I loved how this video was shot from a technical standpoint, but the Dailey family is what brings life to the video. A real family, facing real-life issues, overcoming each challenge with grit, determination and a whole lot of love.”

Directed by Andrew and Brenna Rozario, the video for “Ain’t That Kind of Cowboy,” written by Justin Lantz and Stephen Wilson, follows the day in the life of the Dailey family, featuring a hardworking father as the modern-day cowboy at his small business Dailey Tree Care, based in Murfreesboro, Tenn., and the love he shares with his wife and four kids as Adkins portrays the cowboys of the old west in black and white while singing:

Ain't riding off into the sunset, leaving what I love behind
Only silhouette smoke from a cigarette up against the western sky
In the bottom of the bottle, high in the saddle
Thinking I'm better off on my own
I've done enough cowboying to know
I ain't that kind of cowboy

The contemporary cowboy may wear different boots, but they still uphold the cowboy code, such as always telling the truth, always helping those in distress and being a hard worker – as Adkins’ shared with CMT, “Not all cowboys ride horses, but all cowboys have heart.”

Adkins celebrated the release of his EP Ain’t That Kind of Cowboy in October with a special performance of lead single “Better Off” from the Grand Ole Opry on NBC’s “TODAY with Hoda & Jenna.” “Better Off” was released in March of this year, garnering over 8 million streams. Watch his “TODAY” performance HERE.

About Trace Adkins
Towering baritone Trace Adkins has sold more than 11 million albums and charted more than 20 singles in his 25 years in Nashville, a remarkable run for one of country music’s most easily identifiable stars. With over one billion spins on Pandora (10 million per month), one million followers on Spotify and nearly 200 million plays on YouTube, the Louisiana native has released his latest EP Ain’t That Kind of Cowboy via Verge Records, following his 12th studio album Something’s Going On in 2017. A three-time GRAMMY Award nominee, Adkins has won three Academy of Country Music Awards, including the 2009 Single of the Year Award for “You’re Gonna Miss This” and Vocal Event of the Year with Blake Shelton for “Hillbilly Bone” in 2010. The Grand Ole Opry member is also an author and spokesman for the Wounded Warrior Project and The American Red Cross, for whom he raised more than $1.5 million dollars as the winner of NBC’s All-Star Celebrity Apprentice. In recent years, Adkins has performed for U.S. service members across 12 USO Tours. In his 2007 autobiography, A Personal Stand: Observations and Opinions from a Freethinking Roughneck, Adkins recounts his rise to fame, brushes with death and battles with personal demons. Adkins has also acted in multiple films and television shows, playing a tough-as-nails biker in “The Lincoln Lawyer” (starring Matthew McConaughey), a desperate father in “Deepwater Horizon” (starring Mark Wahlberg), a wise oracle and tattoo artist in the family friendly film “Moms’ Night Out” (starring Patricia Heaton, Sean Astin, Sarah Drew) and as MercyMe’s real-life manager, Brickell, in the box office smash “I Can Only Imagine.” The film was the third biggest selling movie on its opening weekend in America. His latest role was as a grandiloquent former general in the film “Badland,” which was released in select theaters and on Amazon Prime Video and Apple TV in November 2019. For more information and announcements, visit http://www.traceadkins.com/ or on Twitter, Facebook and Instagram @TraceAdkins.