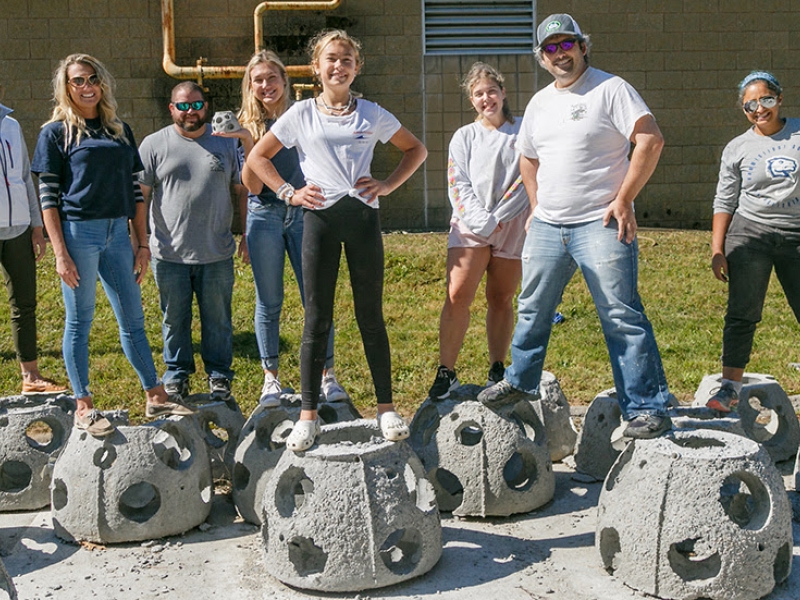 Dr. Maria Rosa, the George & Carol Milne Assistant Professor of Biology at Connecticut College, and her team of students spearheaded the project. Rosa secured a $10,000 grant from Country Music Icon Kenny Chesney’s No Shoes Reefs to partner with The Reef Ball Foundation, which has placed over 700,000 reef balls in more than 70 countries since its founding in 1997.

“When this opportunity to work with Connecticut College on a shoreline restoration pilot project came to us from our partners The Reef Ball Foundation, it was simple, Yes! No Shoes Reefs is here to raise Awareness and Support and this project allows us to do both, says Brett Palmer, Co Founder of No Shoes Reefs.

“Any chance that we can support the next generations of people in helping save the aquatic ecosystems – whether the oceans, rivers or lakes – it’s an incredible opportunity,” says Chesney of the project. “There is no simple, one switch fix here. Working on a local level with people who know their environment and its specific needs is one more step towards turning around – in this case – the erosion threatening the Thames Riverfront.”

Conn’s 30 hemispherical concrete artificial reefs will serve as a habitat for local marine life and help rebuild the shoreline by minimizing erosion and promoting the growth of native marsh grasses which stabilize the soil.

“In the two years I’ve been monitoring the waterfront, we’ve lost about a half foot of beach at high tide,” said Rosa. “It doesn’t sound like much, but it means that the water line is hitting the retaining wall, and in the next couple of years it is likely to fail.

“Like living reefs, Reef Balls create a buffer to wave activity, including boat wake action, which can cause millions of dollars in damage to docks and boats in the water,” Rosa further explained.

Rosa worked with Dr. Jason Krumholz, scientific coordinator for The Reef Ball Foundation, and her team of students to construct the Reef Balls using a process pioneered by the founder of the foundation, Todd Barber. A marine-friendly pH-balanced microsilica concrete is poured into a fiberglass mold outfitted with inflatable buoys and tetherballs to create a hollowed center for water and marine life to pass through. Sand is used to create a natural floor, and sugar water is sprayed on the mold, buoys and balls to give the concrete an ideal texture for the settlement of marine life.

Once placed in the water, the reef balls mimic natural reefs in nearly every way. “Living shorelines like this project are great for helping mother nature press the ‘reset’ button and kick start the natural processes which help protect shorelines from erosion. I’m very excited about this project because it will serve as a highly visible ‘living laboratory’ to study how the site evolves, and what fish, birds, and invertebrates are using these Reef Balls as habitat” said Dr. Krumholz.

Rosa will be joined by Connecticut College’s men’s and women’s hockey teams and representatives of No Shoes Reefs, The Reef Ball Foundation, and MarineMax of Westbrook for Saturday’s special launch event. MarineMax helped raise awareness of the project through their grand opening event at their Westbrook store back on April 24, 2021.

Members of the press are invited to attend between 10:30 a.m. and noon, with brief comments to be given at 11 a.m. Please note that all visitors must adhere to the College’s visitor guidance.

About Connecticut CollegeFounded in 1911, Connecticut College is a highly selective private liberal arts college of 1,800 students located on a 750-acre arboretum campus in New London, overlooking Long Island Sound and the Thames River. The College’s mission is to educate students to put the liberal arts into action as citizens of a global society. Through an innovative four-year program, Connections, students integrate every aspect of their experience—from classes to majors to internships to activities to jobs on campus and abroad—into a meaningful pathway that allows them to synthesize different perspectives, solve complex problems, and contribute to the public good. For more information, see www.conncoll.edu or find us  on Facebook, Twitter, Instagram and LinkedIn.About No Shoes ReefsNo Shoes Reefs, is a grassroots initiative started by Kenny Chesney for his love of the ocean that brings an evolving group of Brands, Ocean Conservationists, Habitat Organizations and people working together to help make a difference for our lakes, rivers, and oceans. With the overarching ethos To Raise Awareness and Support, One Reef At A Time, the loose-knit web of contributors are aligned to not just protect, but create new living reefs to provide environments for all forms of aquatic life. www.noshoesreefs.orgAbout The Reef Ball FoundationThe Reef Ball Foundation is an international environmental foundation whose mission is to help restore our world's ocean reef ecosystems and help protect our natural reef systems using Reef Ball technology. A Reef Ball is a designed artificial reef module which mimics the structure and function of a natural reef and is the most used reef technology in the world. Our projects include designed artificial reefs, diving and fishing reefs, specific habitat restoration such as lobsters and sea turtles, ground-breaking coral propagation and planting systems, estuary restoration, red mangrove plantings, oyster reef restoration, erosion control, living shorelines, living seawalls, expert collaboration on a variety of oceanic issues and even projects for birds. Since our beginning in 1997, we have completed 6,000 projects that have deployed 700,000 reef balls in 70 countries.
###