CHASE RICE TAKES A STAND WITH FANS DURING WEEKEND FESTIVAL 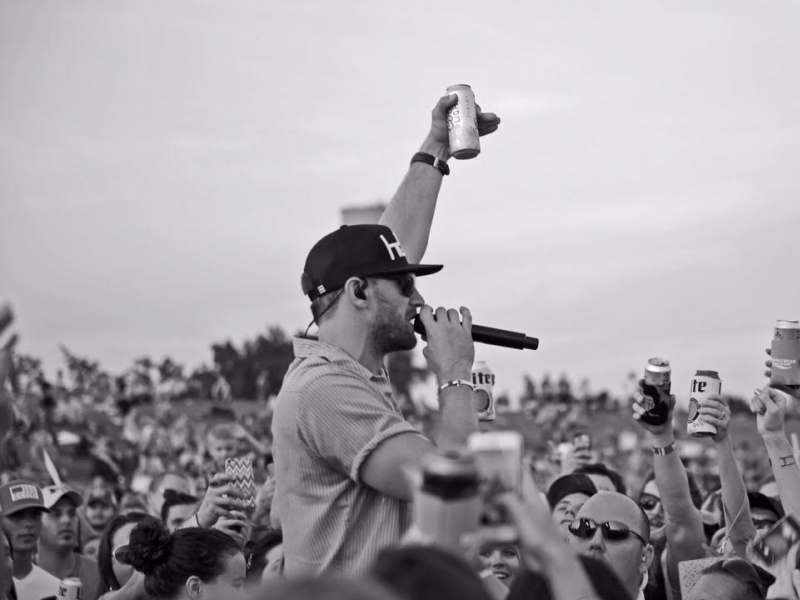 NASHVILLE, Tenn. - (Sept. 10, 2015) – Chase Rice wants his fans to feel like they’re at a party when they come to his shows. When theColumbia Nashville star found himself separated from the good times by a bunch of VIPs seated in the pit last Saturday at the Downstream Country Music Festival in Quapaw, Okla., he decided to take the show out to the fans in the back and give them the experience they came for.

Midway through his set, Rice grabbed the mic, sprinted through the middle of the VIP section and joined a sea of general admission revelers. He delivered the final six songs of his set standing on a folding chair with fans swirling around, recording the scene on their phones.

"Every show we play, no matter if it's a festival or a club or a big stadium, we give it everything we've got. When you come to one of our shows, I'm going to get in your face and I expect you to get in mine," said Rice. "We feed off of each other; that's what makes it fun. Oklahoma came ready to party that night, so we wanted to get out there and make sure they had the best time we could give them."

The scene in Oklahoma is indicative of the showmanship Rice is becoming known for as one of country music’s hottest rising stars. Years on the road gave him the opportunity to spend the summer with Kenny Chesney’s The Big Revival Tour, and more than a million fans were introduced to his high-energy, good-vibes live show.

Rice broke into the business as a songwriter, helping pen hits like Florida Georgia Line’s record-breaking “Cruise.” But as those lucky Oklahomans now know, he is also developing into something special as a live performer and entertainer. Fans can see it for themselves when he launches his third headlining tour, the JD and Jesus Tour, next month.

Rice is taking along The Cadillac Three on select dates and has invited Kelsea Ballerini to open his Atlanta show on Nov. 12. He will hit major cities like Chicago, New York, Philadelphia and Pittsburgh, where the tour kicks off Oct. 2 at Stage AE. Upcoming dates for the JD and Jesus Tourare as follows, with more to be announced in the coming weeks:

About Chase Rice
Within a few short years of moving to Nashville, country music maverick Chase Rice has already built a loyal fan base across the country through his energetic live shows and gained the attention of industry professionals with his edgy, eclectic sound. Rice’s new album, Ignite the Night, was released on Columbia Nashville/Dack Janiels Records and debuted at No. 1 on Billboard’s Top Country Albums and No. 3 on the all-genre chart. With a Platinum-certified Top 5 hit already under his belt with lead single "Ready Set Roll" and new single “Gonna WannaTonight” in the Top 10 and climbing at country radio, Rice will launch theJD and Jesus Tour this October. For more information or tickets, visit www.chaserice.com or follow on Twitter @ChaseRiceMusicand www.Facebook.com/ChaseRiceMusic.