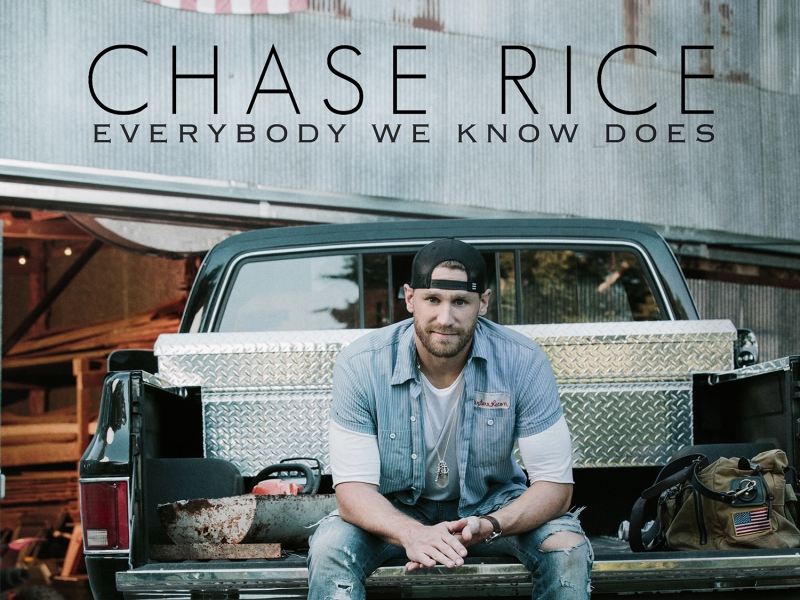 NASHVILLE, Tenn. (Monday, July 11, 2016) – An artist who not only “knows his audience” (USA Today) but also lives, breathes and works right alongside them, Chase Rice is taking the rallying message of his new single “Everybody We Know Does” to heart and hitting the road this fall to play new music for fans right in their home towns. Rice, who has headlined four tours and opened for country superstars Kenny Chesney and Dierks Bentley, decided to route his upcoming Everybody We Know Does Tour directly to those who have grown with him and supported him since he was playing dive bars and fields, selecting a number of unconventional tour markets that are home to some of his most rabid fans so he can bring the music to them. The Everybody We Know Does Tour will launch in September, with the first round of dates announced today and more to follow in the coming weeks.

Written by Jeremy Bussey and Travis Denning and set to impact country radio on Monday, July 18, Rice’s new single has already piqued the ears of fans and critics alike, with Taste of Country calling it “a country-rock anthem that grabs you with guitars and keeps you with a unifying message” that has “the potential to be a career song for Chase Rice.”

Fans rallied around “Everybody We Know Does” en force on social media after the song’s June 24 release, with @dabest_11 sharing, “@ChaseRiceMusic This is the most excited I’ve been in a while for a single & forth coming [sic] album. Sounds like the original Chase Rice. #EWKD” and @jennyyernstt declaring, “#EverybodyWeKnowDoes is the new small town country anthem @ChaseRiceMusic #ewkd #onrepeat.”

“When I first heard ‘Everybody We Know Does,’ I was immediately reminded of all the songs I listened to growing up, the songs my dad and I would listen to out on our farm and it just put me right back at home in those moments,” said Rice. “It’s a message that I needed to hear, and from the feedback we’ve been getting already, I think fans feel the same way. So that’s what this tour is about – finding those fans, whether they’ve been with me for a while or might be seeing my show for the first time, and experiencing music together in some of those places that mean the most to us.”

Rice will launch the Everybody We Know Does Tour in New Haven, Connecticut on September 8, with the first round of dates to be announced as follows:

For more information or to purchase tickets for the Everybody We Know Does Tour, visit www.chaserice.com or follow on Twitter@ChaseRiceMusic and www.Facebook.com/chasericemusic.

About Chase Rice
Within a few short years of moving to Nashville, country music maverick Chase Rice has already built a loyal fan base across the country through his energetic live shows and gained the attention of industry professionals with his edgy, eclectic sound. Rice’s Ignite the Night was released on Columbia Nashville/Dack Janiels Records and debuted at No. 1 on Billboard’s Top Country Albums and No. 3 on the all-genre chart. That album produced a pair of Top 5 hits, the Platinum-certified "Ready Set Roll" and “Gonna Wanna Tonight.” After supporting Kenny Chesney’s The Big Revival Tour 2015, Rice consistently sold out 2,500-3,000 seat venues on his JD and Jesus Tour and recently wrapped Campus Events Network Presents College Days, Country Nights: The Chase Rice Back to College Tour. His new single, “Everybody We Know Does,” is available at digital retailers now with an impact date at country radio set for July 18, 2016 and a new album forthcoming. Rice will launch his fifth headlining tour, the Everybody We Know Does Tour, this fall.