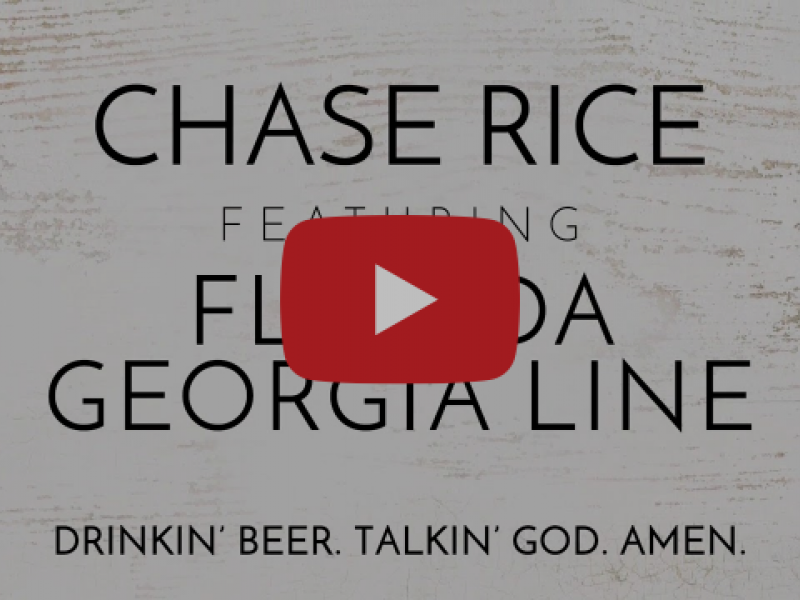 Written by Rice together with Hunter Phelps, Cale Dodds and Corey Crowder, the song’s catchy lyrics celebrate the power of slowing down to enjoy quality time and conversation with friends, which has become more relevant this year than ever before:

“We actually wrote this song before the pandemic, which is crazy because it’s almost like God was intervening in the song just to say, ‘Hey y’all, get ready. You’re gonna have a lot of time to sit around a fire, drink some beer and hang out with me,’” notes Rice. “It’s a special song in that way because it really is a celebration of what 2020 became for us and a lot of other people -- slowing down to enjoy these moments with our loved ones and having deeper, more meaningful conversations with each other.”

The collaboration serves as another example of Rice’s desire to share new music with fans more frequently than traditional album cycles allow, as it follows four-song surprise project The Album Part I (featuring Top 10 hit “Lonely If You Are”) and seven-song follow up The Album Part II, both released earlier this year.

Produced by Florida Georgia Line, Crowder & Rice, the collaboration was a long time coming for Rice and FGL’s Brian Kelley and Tyler Hubbard, who first worked together more than 10 years ago as eager songwriters new to Music City.

“Brian actually helped me finish the first song I ever wrote, which was about my dad when he passed away, and I knew right then that I loved making music,” shares Rice, who first befriended Kelley when the two were toddlers in Daytona Beach, Florida. “When I moved to Nashville, we lived in a house together with Tyler where we all worked on songs constantly. These lyrics are literally what we did; sitting around fire pits talking about music, talking about life – and now we’re talking about it a decade later in a song that a lot of people are going to hear, which is pretty special.”

FGL’s Hubbard and Kelley shared, “We are so excited to be on this jam with our boy Chase. We’ve dreamed of being on the radio together ever since we were roommates 10 years ago. This song is the perfect one for us, as we often find ourselves drinking beer and talking God when we get together. We hope this brings lots of good times and great conversations. Cheers to making music with friends!”

Rice, who also achieved chart-topping success for back-to-back weeks in 2019 with Double-Platinum certified hit “Eyes On You,” performed the first in a trio of live stream concerts last night, beginning with a solo acoustic performance which will continue with a full band acoustic show this Sunday, Dec. 6 and culminate with a full production performance including the chance to hear “Drinkin’ Beer. Talkin’ God. Amen.” live on Sunday, Dec. 13. For more information and to purchase tickets starting at $10 per show, visit www.chaserice.com.

About Chase Rice
With nearly 2 million albums sold and more than 1.6 billion total streams, plus a legion of passionate fans at his high-energy concerts across the globe, Chase Rice has established himself as a powerful force in Nashville and beyond – yet he genuinely sees new releases “Drinkin’ Beer. Talkin’ God. Amen.” plus The Album Part I and The Album Part II as the launching pad for music that says what he wants to say, how he wants to say it. With songs such as Top 10 lead single “Lonely If You Are” featuring sleek rhymes over heartland six strings mixed with EDM-laced drama, this is the same gravely-voiced Chase Rice fans first fell in love with years ago – but better. Freer. Unbeholden and uninhibited, somehow capable of evoking Chris LeDoux and The Chronic, campfire singalongs and stadium anthems, all at once. The series of new releases follows his sophomore album, Lambs & Lions, released with Broken Bow Records in 2017 and featuring the Double-Platinum, two-week chart topper “Eyes On You” – Rice’s first No. 1 as an artist and the most-streamed song of his career. Lambs & Lions followed Ignite the Night, which debuted at No. 1 on Billboard’s Top Country Albums and No. 3 on the all-genre chart, producing a pair of Top 5 hits; “Ready Set Roll” and “Gonna Wanna Tonight.” After supporting Kenny Chesney’s The Big Revival stadium tour, Rice has consistently sold out 2,500-3,000 seat venues on his own headlining tours. Follow Rice on Twitter and Facebook @ChaseRiceMusic and on Instagram @ChaseRice.
About Florida Georgia Line
Amassing the best-selling digital Country single of all time (SoundScan) with 11x Platinum breakout “Cruise” – the first Country act to achieve RIAA’s Diamond certification, GRAMMY-nominated duo Florida Georgia Line have been making history since 2012. As “one of the format’s premier musical shapeshifters” (Esquire), “Long Live” and seasonal “Lit This Year” are their current releases, in addition to FGL’s “Lil Bit” collaboration with Nelly. The global superstars hold the longest reign on the Billboard Hot Country Songs chart (50 straight weeks) with Diamond (10x Platinum), No. 1 “Meant to Be” with Bebe Rexha. They’ve tallied 17 career No. 1 singles, 13.1+ billion streams, sold more than 33.9 million tracks and 4.7 million albums worldwide, logged 1.5 billion video views and played to over 4 million fans spanning massive arena and stadium headline tours. Honored by ACM, AMA, Billboard, CMA and CMT Music Awards, FGL’s creative empire also includes “FGL House Party Radio” with Florida Georgia Line on Apple Music Country, plus thriving business initiatives: FGL HOUSE, meet + greet, Round Here Records, Tree Vibez Music, Tribe Kelley, Old Camp Whiskey and Wolf Moon Bourbon (with Jason Aldean).