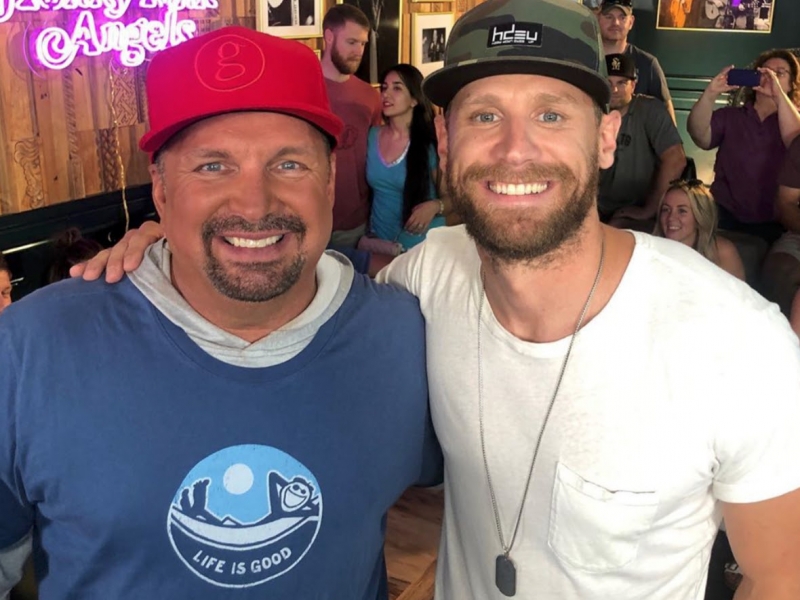 NASHVILLE, Tenn. – Chase Rice dropped by “Inside Studio G” today, February 17, to announce that he will be the special guest joining Garth Brooks this Saturday, February 22, at the Detroit Lions’ Ford Field. The announcement brings full circle a story that began last summer.

When Rice stopped by the “Entertainment Tonight” broadcast from Downtown Nashville during CMA Fest, he was surprised with a special co-host – his lifelong idol, Garth Brooks.

While chatting about Rice’s goal of someday playing the stadium across the river, Brooks made quite the proposal: “Let’s do a deal, okay? Let’s say if we ever did play Nissan Stadium, you want to open that show?” Watch the special moment HERE.

Turns out, Brooks was eager to make that deal a reality sooner than later and instead invited Rice to open his stadium show this weekend in Detroit, Michigan.

“Growing up, Garth was it for me,” explains Rice. “He was the first concert I ever saw as a kid growing up in North Carolina, and like I told him when he surprised me on set – he’s the reason I play country music today. To open a show for him, let alone in a massive stadium like Ford Field, is an absolute dream come true.”

The concert announcement continues an exciting start to 2020 for Rice, who surprise-released The Album Part I on January 24. The No. 1 project features current Top 30 single “Lonely If You Are,” with an adorable new music video HERE.

Rice recently wrapped his headlining The Pint of Anything Tour throughout Europe and will soon join Brantley Gilbert’s Fire’t Up Tour for select dates starting April 16 in Greenville, S.C. as well as select dates on Rascal Flatts’ Life Is A Highway Farewell Tour later this year.

About Chase Rice
With over 1.6 million albums sold and more than 1.1 billion total streams, plus a legion of passionate fans at his high-energy concerts across the globe, Rice has already established himself as a powerful force in Nashville and beyond – but he genuinely sees new release The Album Part I as the launching pad for music that says what he wants to say, how he wants to say it. With songs such as lead single “Lonely If You Are,” The Album Part I features the same gravely-voiced Rice fans first fell in love with years ago – but better. Freer. Unbeholden and uninhibited, somehow capable of evoking Chris LeDoux and The Chronic, campfire singalongs and stadium anthems, all at once. The project follows his 2017 sophomore album, Lambs & Lions, featuring two-week chart-topper “Eyes On You” – Rice’s first No. 1 as an artist and the most-streamed song of his career with nearly 300 million streams and counting. Lambs & Lions followed breakout album Ignite the Night, which debuted at No. 1 on Billboard’s Top Country Albums and No. 3 on the all-genre chart, producing a pair of Top 5 hits; “Ready Set Roll” and “Gonna Wanna Tonight.” Since supporting Kenny Chesney’s The Big Revival stadium tour, Rice has consistently sold out 2,500-3,000 seat venues with his own headlining shows. He will join Brantley Gilbert’s Fire’t Up Tour this summer.