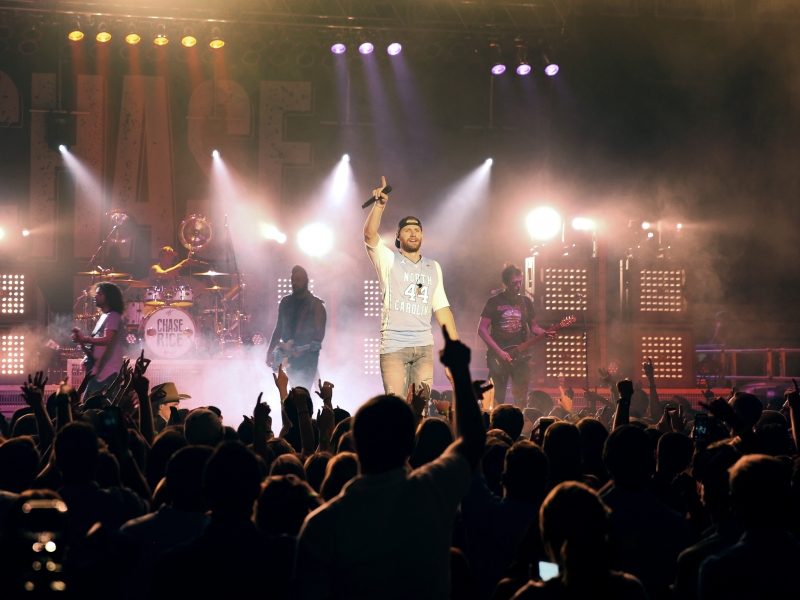 NASHVILLE, Tenn. (April 22, 2016) – Chase Rice’s allegiance to his alma mater, the University of North Carolina at Chapel Hill, and its Tar Heels is well documented, but viewers will have the chance to see Rice return to his roots for the first time as a headlining artist in a new episode of CMT Hot 20 Countdown premiering tomorrow, April 23 at 9 a.m. ET/PT Rice filmed the episode during a recent tour stop at the university on Campus Events Network Presents College Days, Country Nights: The Chase Rice Back to College Tour, which is his fourth headlining run after opening for Kenny Chesney on The Big Revival Tour 2015 and consistently selling out 2,000 – 3,000 seat capacity venues on his JD and Jesus Tour last fall.

Currently at work on his next Columbia Nashville / Dack Janiels Records album expected in late 2016, Rice seized the opportunity to hit the road this spring and perform his new music for what Pollstar notes is “the most discerning crowd there is: college kids.”

“Music has taken me all over the country, all over the world these last couple of years, and it’s given me a life I only could’ve dreamed about when I was in college,” Rice said upon returning to his former stomping grounds at UNC and even touring the campus football facilities where he used to train as a linebacker for the team. “But Carolina will always have my heart. I will always be a Tar Heel, and that makes this particular show really special to me. I learned a lot about life while I was here, not just as a student or a football player but getting injured and losing my dad when I was a senior in school – those experiences changed my life forever. Ultimately, they brought me to music and so it’s really cool to bring it all back to where it started.”

The Chase Rice Back to College Tour continues tomorrow at Southern Illinois University and concludes at the University of New Hampshire onMay 7, after which Rice will continue to perform select headlining shows and festivals throughout the summer. Upcoming dates are as follows:

About Chase Rice
Within a few short years of moving to Nashville, country music maverick Chase Rice has already built a loyal fan base across the country through his energetic live shows and gained the attention of industry professionals with his edgy, eclectic sound. Rice’s Ignite the Night was released on Columbia Nashville/Dack Janiels Records and debuted at No. 1 onBillboard’s Top Country Albums and No. 3 on the all-genre chart. That album produced a pair of Top 5 hits, the Platinum-certified "Ready Set Roll" and “Gonna Wanna Tonight.” After supporting Kenny Chesney’sThe Big Revival Tour 2015, Rice consistently sold out 2,500-3,000 seat venues on his JD and Jesus Tour and is currently on his fourth headlining tour, Campus Events Network Presents College Days, Country Nights:The Chase Rice Back to College Tour. He is working on new music for a forthcoming album expected in late 2016.