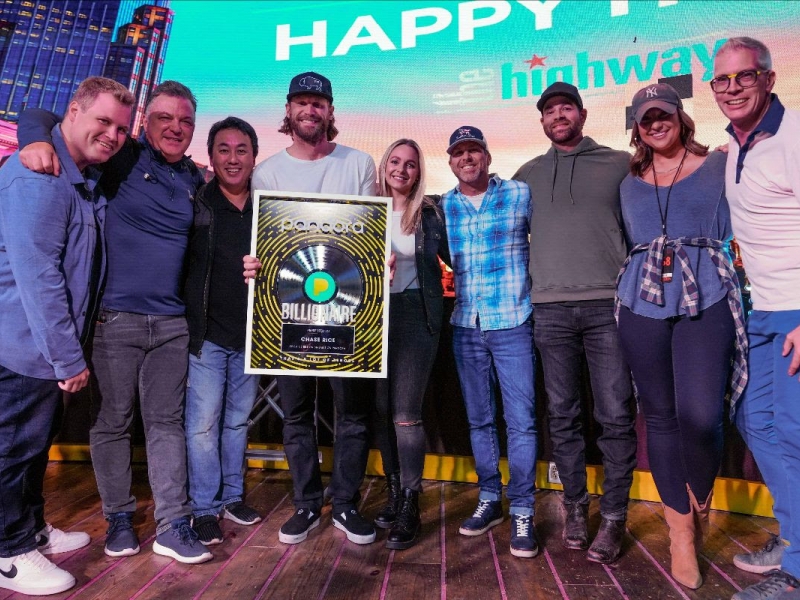 NASHVILLE, Tenn. – Just hours after releasing brand-new song “Way Down Yonder,” multi-Platinum singer/songwriter Chase Rice was surprised at SiriusXM The Highway’s “Music Row Happy Hour” with a plaque commemorating his Pandora Billionaire status. The milestone commemorates over 1.5 billion streams on the platform, and Rice has been added to Pandora’s Country Billionaires Radio in celebration of the honor.

“Throughout my career, now matter where we were at with touring or radio success, our incredible fans have consistently streamed the music,” shared the man praised by American Songwriter as “one of country music’s most intriguing and lasting acts” in response to the honor. "This is a testament to those fans and their love of country music. They're why we keep pushing ourselves and why we're so excited to share new songs with them now."

Rice quickly moved from one celebration to the next, making his way up Broadway to kick off the night’s Rock N’ Roll Cowboy tour stop at Bridgestone Arena. In addition to his chart-topping hits including “Eyes On You” and “Drinkin’ Beer. Talkin’ God. Amen.” plus fellow Platinum-certified favorites “Ready Set Roll” and “Lonely If You Are,” Rice also treated fans to a live performance of the just-released song.

Written by Rice together with Hunter Phelps, John Byron, Blake Pendergrass and Corey Crowder during a writing retreat in Florida that also produced recent release “Key West & Colorado,” the song paints a vivid picture of hardworking characters living beyond the confines of the law:

The song and accompanying music video, shot in a single take as a time period piece at Fort Worth’s Stockyards National Historic District, previews a new sound embodying Rice’s next musical era. His forthcoming album, recorded during a two-week period alongside producer Oscar Charles and a live band at Rice’s farm outside Nashville, used makeshift recording environment to capture a pure, raw style unlike any of his previous studio projects.

About Chase Rice
With more than 2.3 million albums sold and over 2.3 billion total streams, plus a legion of passionate fans at his high-energy concerts across the globe, Chase Rice has established himself as a powerful force in Nashville and beyond. With a forthcoming album crafted in his rural Tennessee home-turned-studio, his sound continues to evolve to reflect the realities of his life, as evidenced by recent releases “Key West & Colorado” and “Way Down Yonder.” The new music serves as a follow up to his three-part project, The Album, featuring his latest Platinum-certified No. 1 hit, “Drinkin’ Beer. Talkin’ God. Amen. (feat. Florida Georgia Line)” and Platinum-certified Top 10 hit “Lonely If You Are.” This is the same gravelly-voiced Chase Rice fans first fell in love with years ago – but better. Freer. Unbeholden and uninhibited, somehow capable of evoking Chris LeDoux and The Chronic, campfire singalongs and stadium anthems, all at once. The new music builds upon the success of his sophomore album, Lambs & Lions, which featured the Triple-Platinum, two-week chart topper “Eyes On You” – Rice’s first No. 1 as an artist and the most-streamed song of his career. Lambs & Lions followed Ignite the Night, which debuted at No. 1 on Billboard’s Top Country Albums and No. 3 on the all-genre chart, producing a pair of Top 5 hits; “Gonna Wanna Tonight” and Platinum-certified “Ready Set Roll.” In addition to selling out arenas with Kane Brown and Jason Aldean plus stadiums with Kenny Chesney and Garth Brooks, Rice also consistently sells out venues across the U.S. and Europe on his own headlining tours.

About Pandora
Pandora, a subsidiary of SiriusXM, is the largest ad-supported audio entertainment streaming service in the U.S. Pandora provides consumers a uniquely-personalized music and podcast listening experience with its proprietary Music Genome Project® and Podcast Genome Project® technology. Pandora is also the leading digital audio advertising platform in the U.S. Through its own Pandora service, its AdsWizz platform, and third party services, such as SoundCloud, the Company connects brands to the largest ad-supported streaming audio marketplace in the country. Pandora is available through its mobile app, the web, and integrations with more than 2,000 connected products.